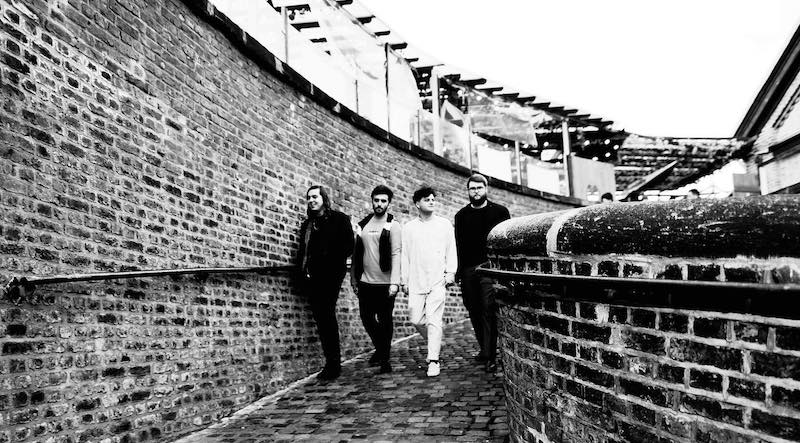 North Parade have been causing quite a stir on local radio for a while now, with a handful of individually released indie bangers peppering the airwaves.

Their first release was a song called Birmingham – we were immediately intrigued by the title alone – and they’ve retained our interest with their debut EP, How To Be Good. The intrigue starts with the opening bars of ‘The NOW’, and the quality never dips with the jaunty, angular pop of ‘Keep Things Casual’, the sublime ‘Someone’ and the epic scale of ‘An Accomodation’. The EP, in our humble opinion, suffers from unwarranted modesty in the title. It could justifiably be called How To Be Great. Counteract isolated lead singer Henry Plumridge to give him some northern exposure.

The band are from all over the country – how come you’re considered a Birmingham band?

I think we identify with Birmingham the most because it’s where we all met each other. It’s also where we first started practicing and playing. Despite being from all over, when we return to Birmingham its always a nice feeling. And no rehearsal space ever has matched Muthers!

I suppose having a song called ‘Birmingham’ helps. The city is not referenced in the lyrics, so what’s the story behind the title?

People always seem to pick up on this which is funny because when I wrote it I didn’t think too much about it. It just seemed to fit. It was written at a time in my life where I was between places a lot. I think I’ve mentioned this before but I actually wrote the lyrics at a motorway services between Birmingham and Oxford. The lyrics are all very literal so it made sense to have a direct and literal title too. As well as that I quite liked the idea that there were millions of songs referencing ‘Paris’ or ‘New York’ and that I could make that little trope my own.

We saw you live at Mama Roux’s just before the lockdown at a great gig supporting Karkosa. Are you mates with them? Who else do you rate?

Karkosa are great. We’ve played with them lots and I’d say we know them pretty well now. That night particularly they were great I thought – a really varied and polished set. There are a lot of other good Birmingham bands too; Riscas, Sugarthief and Ivory Wave all come to mind. We’ve never played with any of them but hope to have the chance to one day.

Why do you take your shoes off to play live?

This was actually originally just because I had a very small button on a pedal that I needed to press and I couldn’t do it with shoes on. But it always got people talking for some reason so even when that pedal went I kept the shoes off. I actually much prefer playing like it, not sure why.

We first heard you through Tim Senna’s recommendation. He’s a great advocate of the local scene, so it must be nice to have him championing you.

Tim’s been so, so supportive right from the start. He’s got a seriously infectious enthusiasm for Birmingham and all new indie music and so to have him on our side is amazing. I’ve also got to know him personally quite well and he’s offered lots of good advice and is generally just a lovely guy.

Your excellent debut EP, How To Be Good, is released today (June 19). Did you manage to get together to record the EP or was it done in isolation?

We were lucky enough to record this EP before all this COVID-19 madness. We also did two follow up singles that are being mixed as we speak so we’ve been quite lucky there. This EP was really a collating of the best things we’d done up until sort of seven or eight months ago. We’ve already started writing for EP #2 and I’m very excited to get recording it as soon as we can.

An Accomodation is one of your best, and shares a title with a poem by Simon Armitage. Any connection?

Yeah it was a very conscious decision to name it after that poem. The lyrics also make use of the same double meaning that the poem does; an accommodation like a place to stay, and also ‘accommodating’ someone. I always found the poem to be really beautiful and loved the title for years. It was just a case of waiting for the right time to use it really.

Who are the other guys in the band, and how did it all begin?

I posted on a Facebook page actually the first day I started at Birmingham University saying something along the lines of “does anyone want to play some music with me?” Ollie (the drummer) replied I think fairly quickly and we met for a drink. Ollie had already met James (bass player) at a house party I think, and so we met with him to ask if he wanted to play with us and he said yes. Since then we’ve undergone a few personnel changes on lead guitar. At the moment Tom Alford plays with us who’s a friend I know from back home in Oxford. Oh, and I play guitar, occasional harmonica and sing.

Is there a song by someone else you wish you’d written?

If I’m honest, barely a day of listening to music goes by without me thinking “damn I wish I’d written that”. I always say the two songs I’m most in awe of ever are ‘Visions of Johanna’ by Bob Dylan and ‘There Is A Light That Never Goes Out’ by The Smiths. If I am ever able to write a song with a tenth of the beauty those songs have I’ll be immensely pleased with myself. As well as them, the song I most recently thought this about was ‘Can’t Take My Eyes Off You’ by Franki Valli. The chords meander through all sorts of interesting changes but the hooks are so clear and immediate it’s genius.

On a similar theme, how about a line-up for a fantasy supergroup with you as lead singer?

Goodness. I’ve never thought about this. I’d have John Densmore on drums – I can’t listen to the Doors without thinking how great he is. I’d be foolish to not have Paul McCartney on bass. Johnny Marr would have to be the guitarist. And just so I get to play with him I’d have Bob Dylan switching between acoustic guitar and keyboards. He could also write the lyrics too ideally.

High standards indeed, and on their debut EP, North Parade have set some pretty high ones of their own.

Keep up to date with North Parade on Facebook and Instagram. Listen to their new EP, released today (19 June), below.