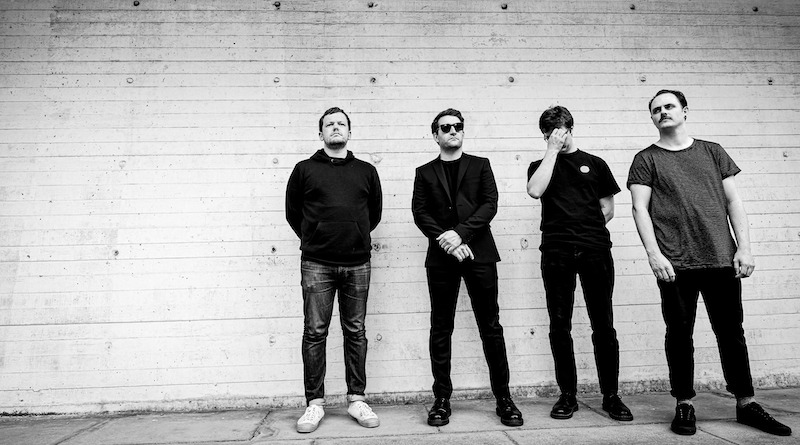 Although there was driving rain and an arctic chill blowing across the canal, it felt as though summer was very much alive and well in Birmingham on 3rd October as a weather hardened flock of Brummies and travelling Mancunians congregated at the Flapper for an evening of raw, resounding energy.

Local Indie four piece, The White Noise kick-started proceedings with half hour of glorious slick, alternative numbers, fusing driving guitar riffs and mature and affable lyrics. The setlist swerved between warm and heartfelt songs of lost love, effortlessly moving between an established indie sound whilst also pushing harder rock boundaries. A step in tempo added intensity to the set, and further enhanced the emotion in the lyrics, and gradually lead the audience to their standout song ‘The Passenger Side’.

The Pagans S.O.H followed shortly after, another local band currently receiving a lot of deserved attention. From the initial psychedelic guitar twangs, the audience were pensively engaged, a tense excitement filling the room… What followed was a fascinating 45-minute journey of raw, highly charged and politically pertinent music, spanning everything from jazz, reggae, metal, hip hop and all genres between, their sound as infectious as it was unique. Black Country tinged conversation and repartee between frontman Marcus and the rest of the band provided a balanced and high-spirited reprieve between bold and incredibly gritty songs addressing a number of challenging subjects, but never compromised their individual style and raw swagger.

The enigmatic four piece kicked off with Pagan Pilgrimage, a piece that flows through eastern influences to almost Led Zeppelin-esq guitars, a teasing drum lick and flowing vocals that seduce you, before spinning you on your head and putting you back in your rightful place. It’s the perfect introduction, three minutes of these hypnotic rhythms and you’re inducted, you’re part of the Pagan Pilgrimage, there is no going back….

From there the set list meandered through the thick riffs of alternative love song ‘Cocky’, spiky punk track ‘Come Down to Reality’, the biting social commentary of ‘Lazy N*gger’ and finished on the Rick Ross/Andre 3000 influenced ‘Pagan 3000’ – Almost no genre or subject was left untouched, yet delivered at such an infectious energy, yet so gracefully – The Pagans S.O.H are going far.

Headlining this evening were the steely Mancunians headliners IST IST, bringing their huge alternative/post punk sound to the expectant Birmingham crowd. Opening epic ‘You’re Mine’ boomed from the speakers, lead singer Adam Houghton’s strong, deep and dark vocals filling each corner of the room. This was the perfect start to an incredibly technical set that offered no let up, from the very first drumbeat to the very last synth, IST IST were here and they were going to bowl over everyone in their way, there was no time for joviality, this was a pure, wall-to-wall musical journey.

A change in tempo after about ten minutes saw the talented four piece drop into the fantastic ‘I Want To Disappear’, one of the standout tracks of the evening. The melancholy heartbeat drum kicks resonating across the room, vocals that felt like they were only being sung to you.

Other highlights included ‘Strangers’ and ‘Preacher’s Warning’, both of which were so gargantuan, it felt as though the venue might collapse with the mercurial wall-of-sound that ripped through and not afraid to bring the tempo back down. ‘Undignified’ was another epic very well received, deep and broody, uncompromising but incredibly distinguished and gratifying. A fantastic Birmingham debut, with nods to Joy Division, Interpol and local favourites Editors, while maintaining their own distinct sound. Expect to see more of IST IST very soon.