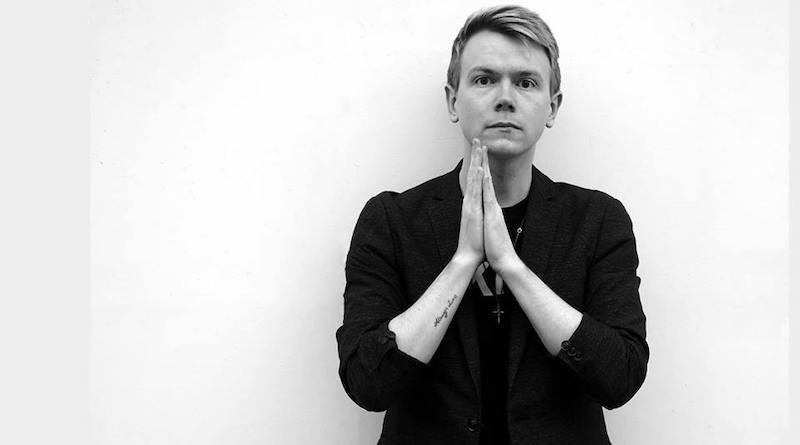 Sam Lambeth is returning to Birmingham for one last hurrah, celebrating ten years of gigging before easing into retirement.

“Heard the one about the man with no hit singles, four failed bands and no fans who decided to stage a gig dedicated solely to himself and his songs?” As introductions go, it’s not quite what I expected, but then again this is Sam Lambeth in a nutshell. Everything is a joke, his upcoming gig included. On Friday 12 July, the former Quinn and Winona singer is performing at Birmingham Victoria to celebrate ten years of making music. Proceeds go to Teenage Cancer Trust, but Lambeth has always said this will be his final performance.

“It’s sort of my funeral, although many people will tell you I have died onstage before,” he laughs. Why is it time to retire? “Not wishing to sound like I’m fishing for pity, but the demand isn’t there. I love writing and performing music, hence why I’ve dedicated so much time and money to it over the years, but I’ve had my time. But when I saw it had been ten years since I formed my first band, I realised this was a chance to play the best songs from each band, a real Greatest Hits. I honestly can’t wait.”

He may be modest, but Lambeth has enjoyed a lot of success. His first band, The MonoBloggers, signed a record deal with Fierce Panda and were featured in NME and Kerrang! magazine; his second, Quinn, enjoyed airplay on BBC Radio One and support slots with We Are Scientists, The Orielles, The Lemonheads and Bully; his biggest audience at a gig stands at nearly 25,000 people. “I think 25 were listening,” he laughs. One wonders if all these jokes hint at a deep-seated lack of self-confidence.

As a live performer, Lambeth is brilliant. Witty, funny, talented and a bundle of energy, he commands the stage and is certainly more than worthy of entry. The fact the gig is also seeing proceeds go to charity no doubt seals the deal. He’s also done a lot for the Birmingham music scene – he’s spent years writing and championing it for national magazines and blogs, including this very magazine, he’s done press releases, DJed at Snobs and Sunflower Lounge, put on gigs in Wolverhampton. “One of the biggest compliments I received was from a friend, who is now a music lecturer. She told me that one of her students and done an essay and referenced me and one of my articles, which was really flattering,” Lambeth says. I wait for the joke. “She got an F, but…”

The gig sees Lambeth joined by Samm Jones, his drummer in Quinn, and George Pandya, bassist in Winona. “Both have been brilliant – Samm and I are like an old married couple, really. We split up, we get back together, we moan, we whine, but he’s someone I need in my life. He keeps me grounded,” Lambeth says. “George is a brilliant bass player. He’s instinctive, picks things up quickly and he’s a good laugh. I’ve enjoyed rehearsing with them both immensely. But more than that, I’m really grateful for the effort they’ve put in. Chris Caddick, from my first band The MonoBloggers, is also playing, which brings things full circle. His harmonies are something else.”

Those that are familiar with his music will be pleased to hear the ‘hits’ are coming out in full force. ‘Sixteen Vandals’, ‘All the Best’, ‘All the Lazy Hipsters’, ‘Fallen Leaves’, ‘Nod My Head’…as I write them down, I do say to Sam that I’m impressed that he’s got all these songs that are, to be fair, pretty catchy and memorable. Does he hope this gig will make people appreciate him? “I don’t think I ever really fit in,” he says. “I was involved in B-Town, I was involved in 2015 – 2018 with the likes of The Cosmics, Riscas, The Assist, Violet et al, but I was always on the outside of things. I guess as I was a writer, too, I sort of fell between two stools. All I hope for this gig is that people come along and watch. It’s cheap, it’s for charity, there’s three amazing support bands, and I just want people to give me that chance and say, ‘Lambeth, he’s actually alright, isn’t he?'”.

I wait for one last joke. “Then again, my mom ain’t said that yet, so why now?”.