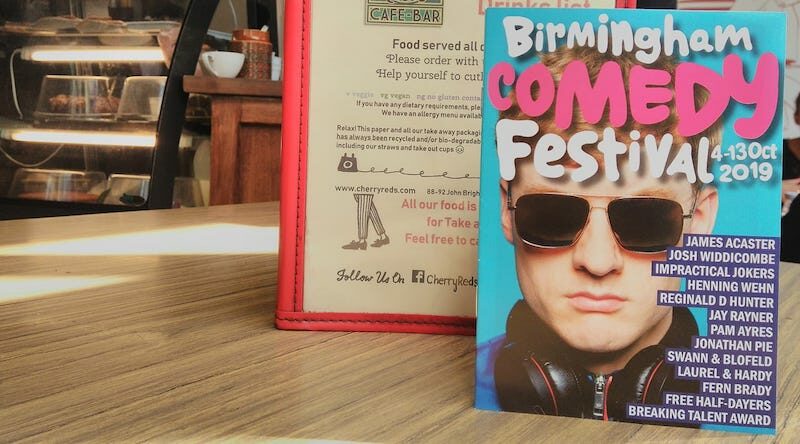 From October 4th-13th, Birmingham’s most beloved venues will open their doors to celebrate the city’s unsung comedy scene; showcasing the best up and coming acts in the West Midlands, as well as huge headliners such as James Acaster and Henning Wehn.

Since 2001, the Birmingham Comedy Festival has been celebrating the underrated comedy scene of the city every year for 10 days in October – with appearances from big names such as Peter Kay, Sean Lock, Lenny Henry, Michael McIntyre, as well as Birmingham’s finest Joe Lycett and Jo Enright.

This years festival proves to be one of the best yet, with headliners such as James Acaster, Josh Widdecombe, Henning Wehn, Reginald D Hunter and Comedy Central’s Impractical Jokers. The performances will take places in various venues around Birmingham, including Birmingham Town Hall, Symphony Hall, Mac, The Glee Club, The Victoria, Cherry Reds, and many more.

But as well as these exciting headliners, you don’t want to miss the new and emerging acts battle it out for the Birmingham Comedy Festival Breaking Talent Award – the biggest comedy prize in the West Midlands, which is taking place on Friday 4th October at The Glee Club. Acts include: Celya AB, Jay Droch, Adam Elmi, Doug Carter and Mary Flanigan. You can also enjoy a free Sunday afternoon Half-Dayer at Cherry Reds, with a host of great acts performing their one hour shows, including Lovdev Barpaga, Rob Kemp, Danny Clives, Susan Murray, Sarah Johnson and Jay Droch.

And whilst the festival focuses predominantly on celebrating stand-up comedy, there’s also a vast range of other activities to get involved with; from theatre, cabaret and burlesque, to puppet shows, West End musicals, poetry readings, and much, much more.

You can find more information on the festival and the schedule here.

You can also get the latest information, including offers and competitions, by following them on Twitter and Facebook.