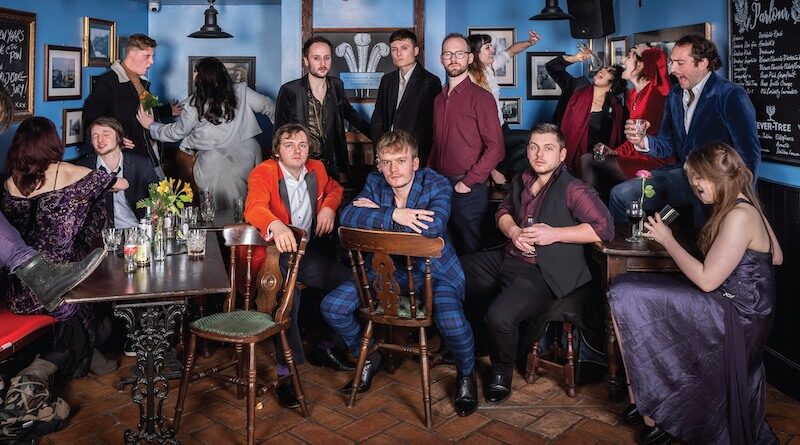 Music is at its best when it reflects the personalities of its creators. In The Taboo Club‘s case, it is nothing but rich, decadent and delightful. However, they’ve never sounded as confident or as carnal as they do on ‘Debauched Times’.

Josh Rochelle-Bates and Rob Lilley spent the best part of five years brewing bleak post-punk with skinny-tied Semantics. However, it is with The Taboo Club where they have truly found their calling – namely, by diving lovingly and unrepentantly into the perfumed bosom of pretension.

By avoiding the slim confines of traditional rock and roll, The Taboo Club are embracing the high trappings of fine art. ‘Debauched Times’, the latest opus taken from their forthcoming debut album, slinks saltily along on sparse piano, searing guitars and stabbing bass. By the time it reaches its chorus, it’s a luscious banquet of booming bass licks, wild sax and chunky arpeggios.

Now fleshed out to a six-piece, the Birmingham band are not afraid to expand their sound. In fact, by removing themselves from convention, they’re only getting more exciting. Singer Rob Lilley’s lyrics continue to be lacerating, lovesick laments to women dead and gone. Here, he even cheekily subverts a lyric from fellow fop Martin Fry, whimsically referring to a “lexicon of hate.”

Lilley may wail that he’s been going “through a self-destructive streak”, but The Taboo Club have been incredibly focused since their formation. With each single, they continue to flourish. On ‘Debauched Times’, the song’s full-bodied instrumentation drops down to a wonderfully sparse middle eight. It’s a moment of restraint in an otherwise relentless – but genuinely thrilling – barrage of bombast.

It’s certainly a welcome taster from their debut record, due for release on Friday 3 July.

“Will someone share a drink with me to these debauched times?” Lilley cries. If they keep churning out beautifully complex tunes such as this, he won’t be short on takers.