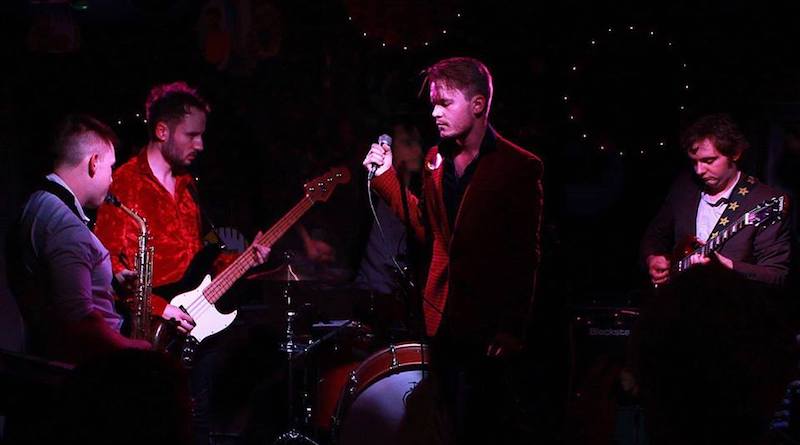 Birmingham’s new kings of cool, The Taboo Club, made their headline debut with a decadent and delightful showcase at The Victoria on Saturday, September 29th.

You could be forgiven for thinking you’ve made a wrong turn. After all, the settings of The Victoria‘s upstairs music venue – often the victim of dim lights and relentless degradation – resemble something you’d expect to find after an absent-minded wander down a Parisian walkway. Baroque masks, coquettish candles, magic provided by the Selly Oak sprite himself, Ed Quigley…this can’t be a traditional rock gig. Think again.

Those already familiar with The Taboo Club will understand they cock their stylistic snoot up at the term ‘half-measures’. Their performance promised to be much more than a meat and potatoes slab of ambulant indie, and more a showcase of both their musical pedigree and rather lurid aesthetic. Ergo, the sight of guests donning decadent masks, sipping prosecco and dressing in the kind of finery usually reserved for a Chelsea members’ club all seems somewhat fitting.

Before the music begins, there is something more pressing to contend with. Not Normal Not OK, the campaign recently launched to combat sexual harassment in music venues across the West Midlands, informs the already voluminous Victoria crowd of its intentions to rid the music world of such monstrosity. As gig-goers, reviewers, bloggers, promoters and more proudly clutch the campaign’s striking logo, it’s testament to their spirit and moral code that one can only see success for this well-meaning cause.

Thanks to @RSVP_West_Mids for all their help and support with the NOT NORMAL – NOT OK campaign, as well as their unrelenting good work to both tackle sexual violence and support survivors across the city https://t.co/D0X3yb6EMt

However, tonight is also an opportunity for the music to do the talking, although Lilac Noise enjoy doing a little bit of that, too. Each song comes with a side dish of delightful stage banter, all addressed in a slightly nervous but enthrallingly infectious Stoke twang. Their debut gig in Birmingham showcases their pop prowess, as aching guitar codas wash over a delicate vocal that blankets the Brummie audience into sweet submission.

Like The Taboo Club, Liquid Cheeks are still wet around the ears when it comes to gigs, but have already enjoyed a meteoric rise. It’s all entirely justified – Ben Gibbs has cut his teeth in Byron Hare, and here his desire and will is just as strong. Their twinkling melodies, warm harmonies and cheeky delivery show a duo that are playing music all for the right reasons – to create ecstasy. And everyone in Victoria is more than happy to get high.

The first thing you notice is the haircuts. Gone are the shaggy syrups donned in Semantics – The Taboo Club are slick from head to toe. Not a single hair is out of place on their heads, the blazers are set to slutty and every song is carefully constructed like a rare Faberge egg. Frontman Rob Lilley continues to grow, whether he be mischievously shaking his maraca or flaunting his tambourine with phallic glee. ‘Jesus of the Desert’ and ‘Dressed to Kill’ showcase what makes the band so unique – the strident horns, the gristly guitars, the thumping bass and the debauched, deranged vocal delivery.

They’re built for pleasure, so naturally two closing covers leave the audience in the need of a post-show cigarette. ‘Lazarus’ and ‘Red Right Hand’ are done faithfully but with a solid injection of fun, the band showing that when it comes to adventurism and eclecticism, they have quite a lot in common with Messrs Bowie and Cave.