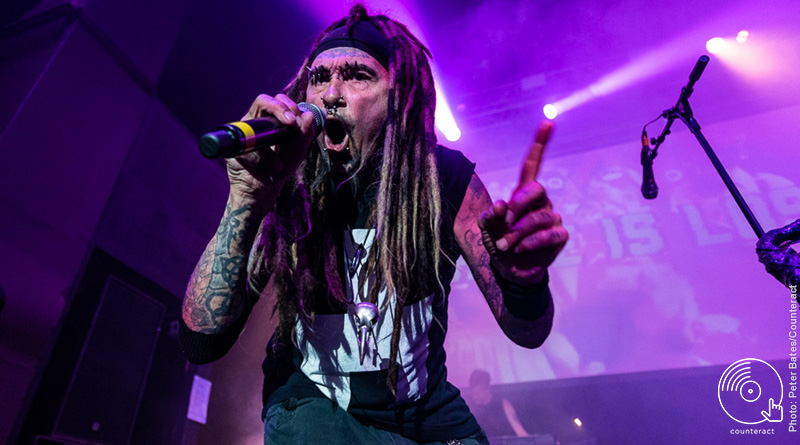 Uncle Al Jourgensen brings his politically acid spiked Ministry to Birmingham for one of only four UK shows. On July 4th, the industrial legends were uncompromising, brutal and painfully relevant.

Opening the gig, and realising a personal dream, is Coventry band deadfilmstar, vocalist Gary Mobley admitting, “all this band ever wanted to do was support Ministry.” The long lived doomsters, gigging since 1999, let loose a set of old school Goth charm. A gloriously nostalgic wallow in the heady days of positive punk (remember that) and the first dark whispers of industrial noise. Close your eyes and we could be back in the eighties at Digbeth‘s Tin Can Club or The Mermaid in Sparkhill. “This was the best night of our lives,” declares Mobley, it shows and it was great. 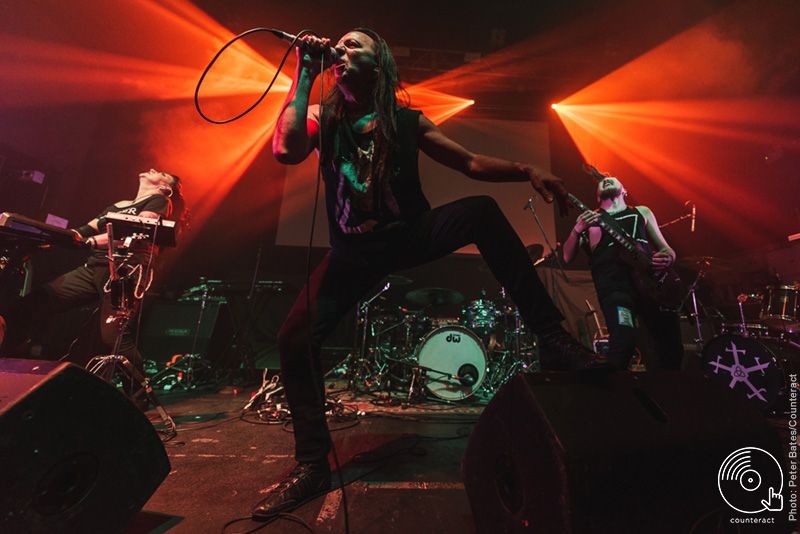 LA rockers 3Teeth emerge on stage behind vocalist Alexis Mincolla, an enigmatic front man; all tache, leather, muscle and primal rage, imagine if Freddie Mercury did Industrial noise and you’ll get the picture. The support band of choice for legends such as Tool, Rammstein, Danzig and tonight Ministry, with acclaimed third album Metawar just out, next time we see these guys they will be headlining. We only get one track from Metawar, the pile driving psychosis of “EXXXIT”, an industrial disco stomp through a swamp of grating acoustics and jarring strobe. The rest of the set is drawn from <shutdown.exe> and the band’s self-titled debut with “Atrophy” particularly standing out, a genre blueprint, pummeling noise and potent fury. 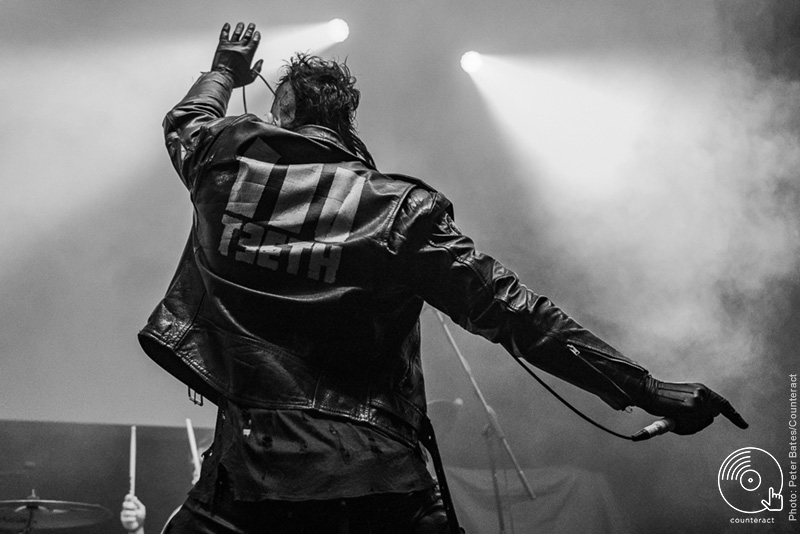 We have Donald Trump to thank for Ministry‘s recent creative surge, Al Jourgensen hates gigging but the election of “the orange turd”, as the legendary front man refers to the US President, has led to a fiery and abrasive new album AmeriKKKant and a slew of live shows. Gone is the chicken wire and elemental darkness that separated audience and band in the past. This is all about connecting and enlightening in an upside down universe of personality cults, alternative facts and rampant self-absorbed nihilism. Jourgensen invites us into a grinding loop of multimedia shock and awe, scored with coruscating power by Ministry’s unique ability to fashion nuclear sized riffs and deliver them with drone like precision. 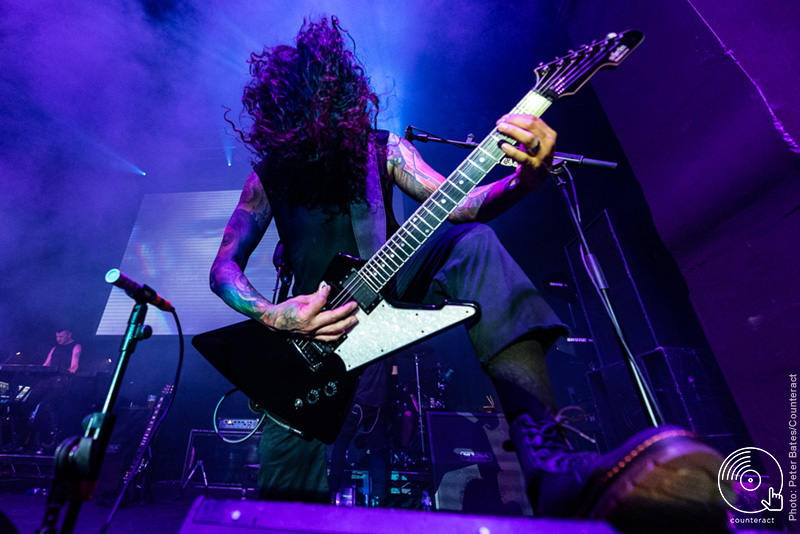 It all kicks off with Trump projected on to a giant screen in a fog of distortion and melting words, “make America great again” slurs forth from Trump’s twitching image, it’s the agit-prop opener “I Know Words” from AmeriKKKant and just as it becomes almost unbearable Ministry launch into “Twilight Zone”. They rip through the whole of the album, synced with unsettling perfection to a barrage of disturbing visuals. Highlight is the violently prescient “Antifa”, featuring two flag waving and masked activists. “What do we want? Violence. When do we want it? Now.” No half-measures here. 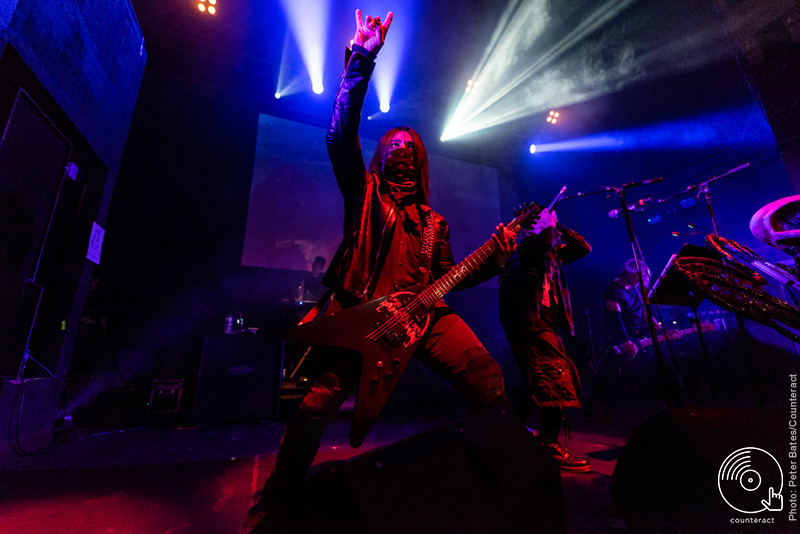 After a brief break which gives the audience time to recoup its shattered senses Ministry return to the stage. Jourgensen explains he’s happy to be spending the 4th of July in Birmingham and derides ‘the fascist’ celebrations of Trump. He adds, “we’re going to celebrate the 4th of July by playing a bunch of old shit.” 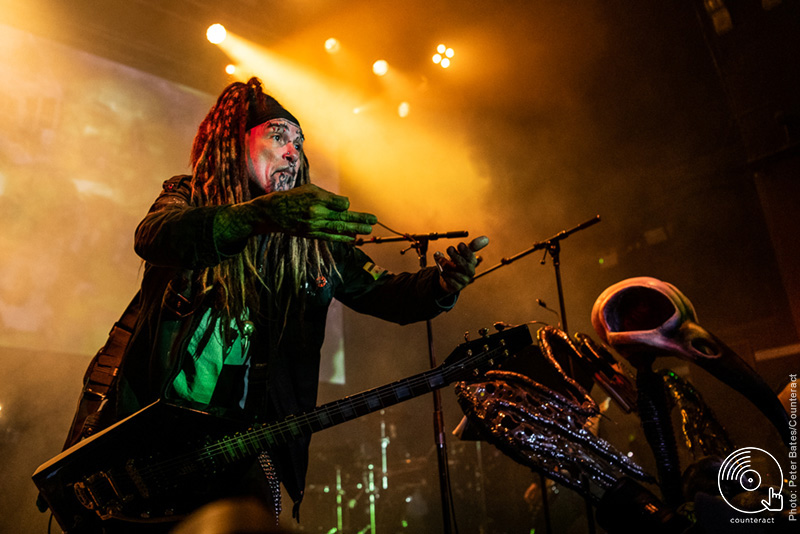 They deliver a pounding trawl through classic albums The Land of Rape and Honey, Psalm 69 and The Mind Is a Terrible Thing to Taste. Tracks such as “Stigmata”, “N.W.O.” and “Just One Fix” are afforded a shocking new cultural resonance in an uncertain twenty first century, but it’s ‘hit’ song “Jesus Built My Hotrod” that stands out. Its speed fueled roots as thunderously obvious as ever, a high octane turbo charged locomotive of a tune peppered with demented lyricism, “Ticky ticky thought of a gun, Bing bip bip a bop bop boom bam,” cue a massive tear up in an enthusiastic and sweaty pit. Closing with a cover of The Revolting Cocks’ “No Devotion”, Ministry and Jourgensen wind things down, so much so that Uncle Al ambles off stage and returns with a spliff, not once but twice. How effective their jackhammer outrage is can probably be debated, but the fact that such raw opposition exists cannot be underestimated. Ignore them at your peril.