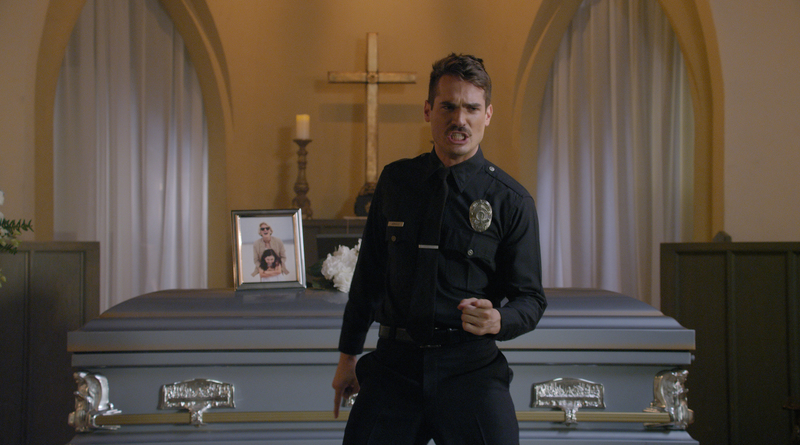 Springsteen and Vietnam. Echoes of the past loom large over a new generation of lost souls in Middle America. All of this and more boils to the surface in Jim Cummings’ directorial debut.

The narrative around the making of Thunder Road has almost overwhelmed the movie itself upon its release. Written by, directed by and starring Jim Cummings, the movie is an expansion on his 2016 Sundance Short Film Grand Jury Prize winning short of the same name, where Cummings plays a small-town police officer dealing with the death of his own mother in a particularly unique way.

The movie was made on a small budget, partly funded by a Kickstarter campaign, with numerous favours pulled in and Cummings taking on numerous additional production roles, including getting the film distributed himself. It’s easy to see why this film can be approached from so many different angles, whether as a DIY-concept at odds with the rest of the film industry, or as a showcase for Cummings himself.

But the title, based on a Bruce Springsteen song of the same name, is as good a starting point as any. Springsteen’s breakout album Born To Run, on which ‘Thunder Road’ sits, “embodied the lost ‘70s—the tense, political, working-class rejection of an increasingly unequal society.”

The counterculture of the 60s had subsided and so, as Hunter S. Thompson noted “less than five years later, you can go up on a steep hill in Las Vegas and look West…you can almost see the high-water mark—that place where the wave finally broke and rolled back.”

Springsteen’s songs, yearning for something better, looking for a way out, resonated with an America stuck in “stagflation”, a country where the poor and working class had taken the brunt of an economic slowdown of a country still reeling from the Vietnam War. They still resonate now.

The film opens with a version of the short film that garnered so much praise. At his mother’s funeral, Police Officer Arnaud (Jim Cummings) struggles with knowing what to say and what to do, fluctuating between the formalities forced on loved ones and a very real sense of loss. As a tribute, Arnaud plans to dance to Springsteen’s ‘Thunder Road’, but when his daughter’s stereo doesn’t work, he decides to go ahead regardless. The result is an excruciating scene, both funny and heartbreaking, that sets the tone for the movie as a whole.

Arnaud is clearly haunted by the very things that Springsteen was writing about. He recently found out his mother “lost her boyfriend in Vietnam”, and he seems acutely aware of her struggles to escape her small town home through dance.

Going through a messy divorce himself and struggling to connect with his young daughter (a wonderful, scene-stealing Kendal Farr), Arnaud is lost. And where some people would throw themselves into work, Arnaud is prevented from doing so by a boss who wants him to take time off. Arnaud continues to work, but after responding to an armed confrontation at a restaurant, the chef holding the knife turns it on himself. Desperation is everywhere.

Arnaud’s only real support comes from his partner and friend Nate (a brilliant Nican Robinson). But when footage emerges online of Arnaud’s funeral ‘routine’, he turns on Nate, leading to an incredibly powerful scene in the parking lot of the Police Station. “This is what you get!” he screams. An immortal line, felt by generations of lost men and women, parents and children, let down at almost every turn and unable to reckon with themselves as a result.

As Bruce explains “I know what it’s like not to be able to do what you want to do, because when I go home, that’s what I see. It’s not fun, it’s no joke. I see my sister and her husband. They’re living the lives of my parents in a certain kind of way. They got kids; they’re working hard. These are people, you can see something in their eyes … I asked my sister, ‘What do you do for fun?’ ‘I don’t have any fun,’ she says. She wasn’t kidding.”

There is a brief but important scene with Arnaud’s sister where this particular quote rings true. Arnaud drives for hours in order to see her, obviously in the hope of having somewhere to stay but discovers that she is in much the same place as before. It doesn’t look like life is fun.

The hope is always there that Arnaud can turn it around, and in his daughter he has a reason to. There are some wonderful scenes between them, both funny and moving, that inject the film with the type of heart and perhaps more importantly, the motive needed to understand what keeps families like this going.

Cummings listed Pixar’s Inside Out as a considerable inspiration when making Thunder Road. Inside Out is a movie that regularly glides from humour to sadness and back again within the space of a few seconds, a real notable characteristic of the best animated children’s films. It’s clear that these small moments of humour, light and love are often intertwined with sadness and anger.

But whereas Inside Out, set inside the mind of a young girl, playfully deals with the complicated nature of the human emotions and the “little voices inside your head”, Thunder Road at times leans more towards a more relatable, less complex view of the human condition. When he’s needed, Nate is simply just there for his buddy. Willing to get drunk and play cards. This scene is one perhaps more resonant to those who struggle to open up, and one that’s closer to the lyrics of Springsteen’s ‘Glory Days’. It marks the start of the film’s, and Arnaud’s second act.

When Springsteen released The River in 1980, Rolling Stone surmised that what made the album “really special” was… “its epic exploration of the second acts of American lives. He realizes that most of our todays are the tragicomic sum of a scattered series of yesterdays that had once hoped to become better tomorrows, he can fuse past and present, desire and destiny, laughter and longing, and have death or glory emerge as more than just another story.”

The second act of Thunder Road has death, laughter, longing and destiny. Though the plot becomes a little stretched, it is not too unrealistic that an American family is ripped apart by drugs. More time dedicated to this part of the story may have made this feel more authentic, but the feeling that Arnaud and his daughter have been heading here the whole time could easily be at home on any of Bruce’s biggest hits. The song even comes back to haunt him.

It’s easy to forgive the parts of the story that don’t quite get off the ground when you take into consideration the film’s budget and the fact it was shot in just over 2 weeks. It’s even easier to forgive these holes after what I can only describe as a goosebump-inducing ending. A perfect combination of music and narrative, and no Bruce Springsteen in earshot.

Thunder Road is showing at The Electric Cinema in Birmingham now, and at The Mockingbird from June 14th.