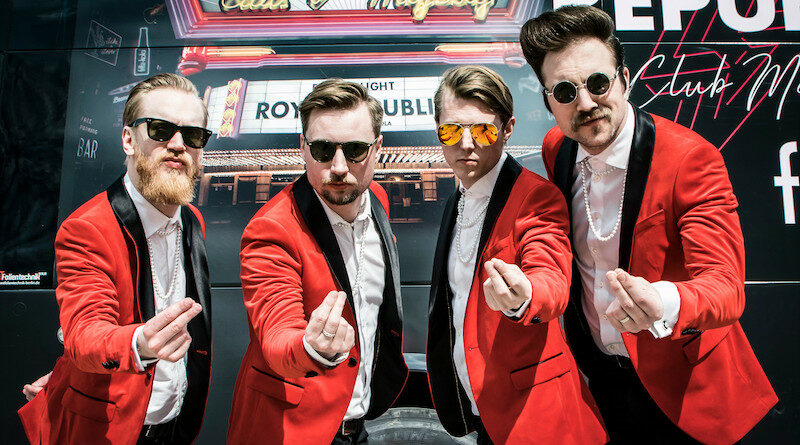 Royal Republic stopped by Birmingham on 27th October with a parade of lights, bags of attitude and plenty of peculiar facial expressions.

Despite the frosty weather, fans of all ages flocked to see Royal Republic headline the O2 Academy2. Amidst the spectators were young children, excitable teenagers, mature middle-agers and even pensioners, with every one of them excited beyond belief for the passion-fuelled performance that was set to unfold.

The sole support slot of the night was occupied by Blackout Problems, a rebellious four-piece from Munich, Germany. The band opened their set with a pre-recorded message spouting angsty truths which set the tone for this politically aware band. As the lads launched into their first song, it wasn’t long before lead singer Mario Radetzky was lost in the crowd, weaving around the spectators and fully embracing his role as frontman. The setlist included passion-fuelled ‘Difference’ as well as ‘Limit’, a song that seemed to subtly build tension until it reached its breaking point. The band were capable of effortlessly fusing musical styles together as they flitted from gentle ballads to angry belters in a matter of seconds. The last song on the set was dedicated to 16-year-old Swedish activist Greta Thunberg, and not only was it a melodical banger but it also included an array of controversial lyrics, such as “the best politician is a dead one”. Yikes.

As the clock ticked over and it became time for Royal Republic to take the stage, their regular gig-goers could hardly contain their excitement as they stood wondering what colour sequin-studded jackets the band would be wearing this evening. For those of you who aren’t familiar with Royal Republic gigs, wearing matching sparkly suits is a reoccurring fashion statement from the band. Thankfully, it wasn’t long before Adam Grahn, Hannes Irengård, Per Andreasson and Jonas Almén graced the stage adorned in matching gold sparkly suits, ready to let the disco unfold.

The band launched into ‘Fireman and Dancer’, an 80s-themed banger where Grahn showcased his incredible vocal range by kicking off the song with an insane melodic scream (which was almost as incredible as his handlebar moustache). This was followed by the aptly named ‘Can’t Fight the Disco’ and then by ‘Make Love Not War’, where drummer Andreasson played a portion of the song with his legs atop the base drum. Despite the tour honouring their latest album Club Majesty, the band of showmen still dedicated a generous portion of their set to performing their older songs, including toe-tapper ‘Getting Along’, energy-fuelled ‘Underwear’ and fan-favourite ‘Full Steam Spacemachine’.

The set flew by and halfway through the band exited the stage leaving bassist Almén alone with the crowd, where he took great pleasure in pulling out his old trusty keytar and conversing in his naturally awkward manner with the crowd. After a short intermission of Van Halen’s ‘Jump’ followed by the ‘Final Countdown’ riff, the remainder of the band returned to the stage with a horde of newly released tunes from Club Majesty, including ‘Stop Moving’, ‘Boomerang’ and ‘Fortune Favours’.

The gig continued with a concoction of songs spanning the band’s discography including tongue-in-cheek ‘Anna-Leigh’ as well as older bangers such as ‘Walk!’ and ‘Tommy-Gun’. The four-piece showed that despite being predominantly comedy-orientated, they’re actually painfully skilled musicians at heart, particularly as they respond to the crowd’s relentless request and played a shortened cover of Metallica’s ‘Battery’.

The night came to a close with ‘Baby’ which was followed by the band taking the stage and having what can only be described as a well-earned boogie. As they lap up the applause, Grahn declared that this was the hottest show they’d ever played and then took it upon himself to take off his soggy tie and ring the sweat out of it all over the stage. Once again Royal Republic have proved that they’re not just talented musicians but they’re also incredible performers, so here’s hoping they don’t leave it too long before they return to Birmingham.