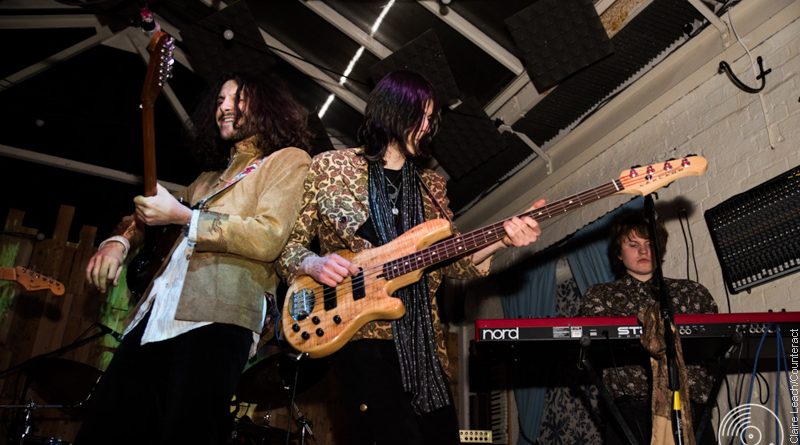 On 18th March at The Station in Sutton Coldfield, West Midlands based The Mothers Earth Experiment held a fundraising event for The Planet Art Project which had raised £400 by close of the evening. After catching The Mothers Earth Experiment previously at Muther’s Studio, Digbeth (pictured), I was left in awe and couldn’t wait to see them again. An almighty bill consisting of five mind blowing, exciting new bands were all just as energetic and determined as each other and made for a most enjoyable evening.

First up were NONSUCH, whom were elegant in the way that their music was mainly soft grunge instrumentals with an injection of psychedelic tastefulness, allowing you to be placed in a dream-like state whilst these guys invade your mind with their enticing presence.

The Lizards were next up in front of an awaiting audience after the warm up from NONSUCH. Their signature psychedelic sound did not disappoint as their blur of tumultuous guitar riffs integrated through a jangly haze of a mystical, spaced out 70s throwback. Dan Whitehouse’s trippy, reverb-heavy vocals seemed to feel like they were landing on your skin and melting into it. These guys have already had some good support so far from BBC Introducing WM and have also supported bands such as Palm Honey and Hidden Charms and are soon to be supporting HMLTD in April at The Sunflower Lounge.

The night only got better with Redditch based six-piece Byron Hare taking to the stage next with an assertive approach to 60s psychedelic pop. What immediately struck me within moments of their performance was front woman, Jodie Ollis’ striking vocals, which drove the band into a rich, deep sound, managing to prick up the hairs on the back of my neck as her powerful voice waved throughout the room.

Table Scraps changed the tone and turned the volume up on the evening x 10, cooking up some good old fashioned rock and roll served hot and loud. Front-man Scott Abbott’s furious vocals reminded me of Jack White’s in songs such as ‘Store Bought Bones’ from his time in The Raconteurs with the same kind of gritty vocals. Admittedly this was my first proper listening to this band but I was most impressed and felt refreshed from watching their live show.  I most certainly won’t be forgetting them any time soon as days later I still have the anger-fueled, scuzzed up ‘Motorcycle’ bouncing off the walls in my head.

Last but certainly not least, West Midlands’ own The Mothers Earth Experiment came on to wrap up the night in the kind of way that left you wanting more. From start to finish the energy was immense as all eyes were on them, including those that could barely catch a glimpse as they piled in through the door. It was hard to draw your attention away from the six-piece as they were just as enticing visually as they were audibly. There was so much going on it was difficult to know where to look, each member giving it their all and putting on their own show. Each track performed had its own unexpected turns and twists; just as you thought the  song was slowing down, the dynamics would suddenly melt into a crazy whirr of synth and would pick up again before launching into several buildups and drops, adding real unpredictability. The drummer Reece Greenfield playing alongside percussion player Oliver Overton put a unique spin on things and added another dimension to their ever-growing sound. It was chaotically brilliant in the best way.