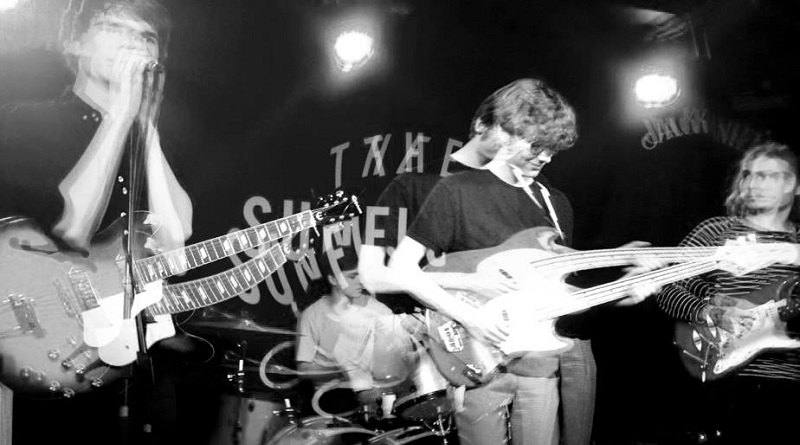 Birmingham quartet The Lizards are an enigmatic group; one which has already played a number of popular shows in the city and are on some pretty cool bills in the near future, too. Consisting of Dan Whitehouse (vocals/guitar,) Cameron Harris (vocals/guitar,) Harry Shaw (bass) and Liam Radburn (drums,) this psychedelic outfit are out to impress – even if their laid-back attitude suggests they don’t necessarily mean to. Their aims? “Just to get the music out there and play as many gigs as possible really. If we’re any good we’ll take it from there,” explains Cameron. The Lizards, who met at school, describes themselves as “basic” and “mystical-“ they even recorded one of their demos in frontman Dan Whitehouse’s Nan’s house.

“So far it’s been very DIY. Everything’s done ourselves – even when it’s probably easier not to. ‘Strange Love’ was recorded in Dan’s Nan’s basement.”

“We all met way back at school and started a band without a clue how to play any of our instruments. Nothing has really changed.

“We could bore you to death and talk about all the shit bands we’ve been in but where we are now is what excites us. We’re enjoying the music and we don’t really hate each other.”

Influenced by a number of 60s bands, The Lizards are massively in to experimental, progressive music. ‘Strange Love’ echoes the psychedelic 60s vibe they are influenced by, but also sounds a little like a stoned Charlatans, while the slacker, almost effortless chorus of “I’m on the inside, you’re on the outside, I’m floating away…” on ‘All My Friends Are Lizards’ will indefinitely get stuck in your head, if you’re not already lost in the music. For a band so hooked on the 60s, their music is timeless.

“We’re all massively influenced by 60s bands like Pink Floyd and Cream, a lot of music that takes you to another dimension.

“When we were younger we all were obsessed with the Arctic Monkeys who probably made it look too easy to be in a band, but seeing them was a massive deal for all of us.”

In a city which has recently seen a number of influential local bands break through on a national, and often international scale, (Peace, Swim Deep, Jaws) it would come as no surprise to see that bands like The Lizards are grateful for the aforementioned bands’ success which paved the way for a new wave of new music in the West Midlands.

“While I wouldn’t say there’s any direct influence in a musical sense, they definitely made it seem more possible for all local bands and created a real buzz around Birmingham a few years ago,” said Cameron.

“We went to college with Jaws and it was really exciting for those guys to make an album and tour all over. Dan has also designed their new album cover so buy, buy, buy.”

Away from the big hitters of Birmingham, The Lizards are in to a number of new local bands- but guitarist Cameron describes one in particular as the best local band out there.

“Handwaxx are probably the best musicians you’ll ever see in your life, they have a song up on their Soundcloud but I must admit it doesn’t do them anywhere near enough justice compared to how freakishly good they are live.”

Despite their young band-age, The Lizards have already played a headline show at the One Trick Pony Club in Moseley and have all the makings of a band who could one day emulate the success of Peace and Swim Deep. But for now, they are just making laid-back music. And having a bloody great time in the process, too.

If you like what you hear, you can catch The Lizards in Birmingham supporting Hatcham Social on November 26th at The Sunflower Lounge. They are also set to support Jaws at their sold-out Hare & Hounds show on December 16th.