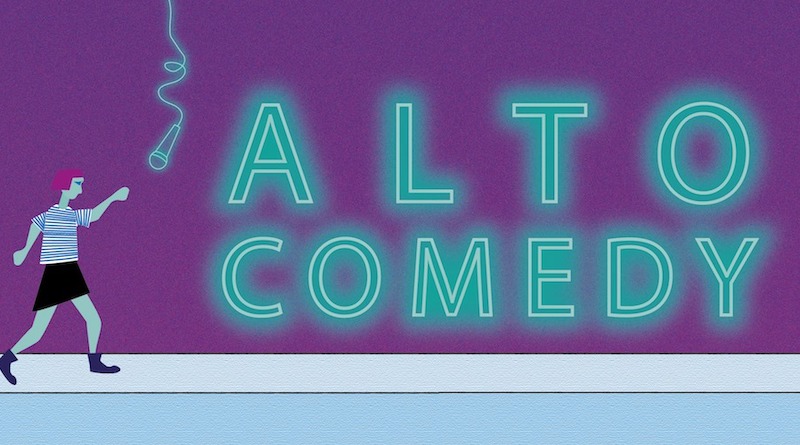 Last Saturday the thermometer had been nudging 31 degrees all afternoon, and as the audience begin to arrive for the second instalment of Alto Comedy, it’s still close and hot. Inside Centrala, it’s mercifully cooler, and the bar is well stocked with ice.

Not long after 8pm, the evening’s host Maria Shehata kicks things off, eagerly pouncing on the brave souls in the front row. She grills a couple on their relationship history, soon uncovering that they actually met working as engineers at the Edinburgh Fringe. Originally from the US, Shehata quips on the British cynicism surrounding romance (“When someone says they fell in love, in the US people cheer – you guys always wait for more information.”)

After explaining that all the performers tonight are extending their slots as one of the billed acts couldn’t make it, Shehata welcomes Kemah Bob to the stage. Bob is an arresting presence. Giddy yet combative, her afro hair is dyed a shade which she wryly describes as LGB-Teal. She regularly alludes to her experiences of living in Texas as a woman of colour, a place she describes as the home of Beyonce, barbecue and bigotry. While the audience seems fairly comfortable with her riffing on white privilege and the patriarchy, Bob is met with stony silence when she criticises Louis Theroux.

Harriet Kemsley is met with appreciative cheers from the merry crowd, and is quick to root out the self-confessed “bad drunks”. Many of the audience recognise her from her appearances on 8 Out of 10 Cats, Roast Battle, or her own wedding to fellow comic Bobby Mair, which was filmed for Viceland and officiated by Romesh Ranganathan. On stage, her self effacing comedy bounces from her relationship to her experience of living with dyspraxia. Kemsley always manages to be warm and relatable, albeit through sheepish giggles and gritted, manic teeth. Her set draws to an abrupt close when the crew backstage inform her that she’s about to miss the last train back to London, and so with little fanfare the performers disappear towards New Street. The crowd have no such urgency, staying until the small hours to drink, dance, and enjoy the warm night by the canal.