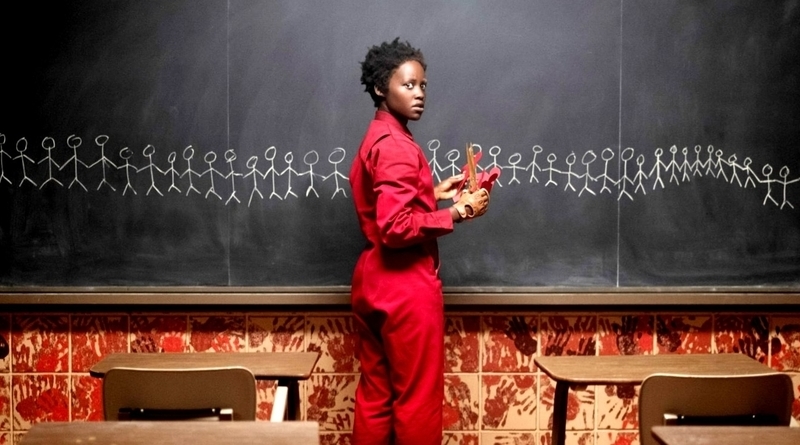 Given the triumphant nature of his debut, Get Out, Jordan Peele’s second feature was always going to have to be in competition with his first. Us is similarly unnerving and sinister, but its attempts to top the scope of Get Out cause its downfall. That said, Us is a fun and scary watch which inserts itself firmly into the horror genre whilst playing with mysteries and twisted social commentary.

The film is set-up like a classic American home invasion movie: the wealthy Gabe and Adelaide Wilson (Winston Duke, Lupita Nyong’o) and their two children (Shahadi Wright, Evan Alex) travel to their lakeside holiday home near Santa Cruz. Peele places black characters in a historically white position: they hang out with wealthy white friends (Tim Heidecker and Elisabeth Moss), they’re shown to have an unwavering trust in the police, and, most importantly, they’re the central victims-cum-heroes of a home invasion. Us may be less outwardly concerned with race than Get Out, but Peele keeps the subject just under the surface for the duration.

The present-day storyline is preceded by flashbacks to 1986, during Adelaide’s childhood. The flashbacks are gorgeous; a young Adelaide (Madison Curry) walks around a fairground at night where she is separated from her parents and winds up having a strange experience in a hall of mirrors. The camera stays tight to Adelaide’s face, shrinking her against her surroundings and developing the sinister, uneasy mood.

The ‘Us’ of the title refers to the family of evil doppelgangers who show up on the present-day Wilson’s driveway and cause the havoc that motivates the rest of the film. The clones call themselves ‘the Tethered’ and claim to be the mistreated ‘shadows’ of humanity, existing in a very literal dark underbelly of America. Peele’s army of until-now hidden villains draw on myths about race, America’s homeless population, and a fear of the Other. The Tethered come from underground tunnels, don red jumpsuits and carry huge scissors as they move, animal-like, in pursuit of each of their human twins.

Twinning is a consistent theme, from Adelaide’s reflection in the hall of mirrors to Gabe’s attempts to emulate their friends. Nyong’o’s characters are perhaps the most effective exploration of duality: Adelaide becomes increasingly akin to her clone as she fights violently to protect her family. She is the true protagonist, and we watch her wrestle with lingering childhood phobias as her storyline explores the idea that you simply cannot run from yourself.

Michael Abels’ twisted score creates a fantastically eerie backdrop to the more tense scenes, but as the film goes on the graphic attacks become somewhat repetitive and the plot begins to lose its footing. An attempt to explain the history of the Tethered means the film necessarily expands outside of its Santa Cruz setting across both time and space. The scale grows too much and too quickly, losing any of the delicate tension developed in the first half. However, a genuine intrigue in the story and some great acting keeps interest. You’ll find yourself rooting for the Wilsons against their sinister clones, and end up leaving the cinema unsettled, but perhaps a little unfulfilled.

Us is showing at The Electric Cinema in Birmingham now.