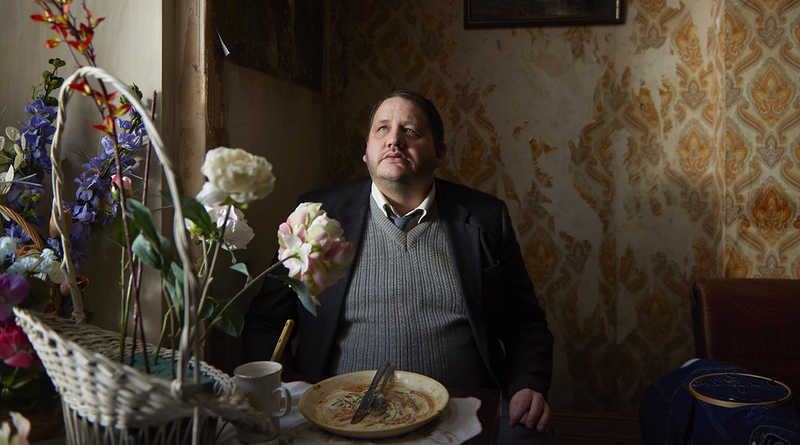 Richard Billingham brings his domestic photography to life in this feature debut which explores messy family dynamics and a childhood marked by poverty.

Artist Richard Billingham made his name in the nineteen-nineties when photographs of his parents in their West Midlands home were published as photography collection Ray’s A Laugh (1996), and later exhibited by Charles Saatchi. Billingham’s semi-autobiographical feature debut Ray & Liz brings to life these photographs as a stark yet beautiful piece of social realism cinema.

Ray & Liz opens with Ray (Patrick Romer and, as a younger Ray, Justin Sallinger), based on Billingham’s father, living a lonely existence in a squalid flat, marked only by the amount of alcohol he has left and the changing light through his window. From here, the film consists of flashbacks to two defining events in his family history. In these flashbacks, Ray lives with wife Liz (Ella Smith and as older Liz, Deidre Kelly) and their sons Richard and Jason in Cradley Heath.

The film is slow and often hovers on moments which capture the essence of Btillingham’s photography before placing them in this staged version of his family life. Billingham’s mastery of the domestic shines in his child’s-eye-view of eighties life: a box of Lego bricks as one’s hand fishes through them, the clicks and whirs of a new tape recorder, the repeated image of a series of faux-fireplace heaters. In isolation, these objects point to the temporal setting, but the poverty that surrounds them is Billingham’s real subject.

Older Ray’s liquid diet and the film’s first flashback explore at best an unsettling relationship with alcohol and at worst a sickeningly grotesque display of excessive drinking. The presence of alcohol is matched only by Liz’s chainsmoking and the constant flow of tea. Overfull cups of tea passed from Ray to Liz and the almost-spilling glasses of homebrew an older Ray pours for himself make use of a touchingly personal trait to bridge the gap between all three time periods.

Billingham ensures a tight framing of his close-ups, which prove perhaps most effective in the repeated images of eyes. Staring out from religious paintings in the home, from Liz’s jigsaw puzzles and from odd posters of exotic animals, these eyes might fill in for the parental eye in the face of neglectful, depression-ridden parents. Perhaps also, they are imitative of older brother Richard’s (Sam Plant, and as a younger Richard, Jacob Tuton) watchful eye which will later result in the making of this film.

Ray & Liz is a delight for the critical viewer, playing with the familiar presentation of decadent domesticity to emphasise life in poverty. Idle adults, high rise views and the constant presence of animal imagery are reminiscent of a decadent lifestyle, yet Billingham swaps these for barking dogs, garish posters of tigers and snails kept in tupperware to emphasise the very different context of Ray & Liz.

The pets contribute to the chaos, providing the childlike humour which comes with rabbit droppings or dog urine where it shouldn’t be, whilst foregrounding the grimy conditions the family exist in. Youngest son Jason’s (Joshua Millard-Lloyd) infatuation with animals is one of the few providers of real sympathy and attachment to any character in the film. The second flashback centres in on Jason and drips with Loachian imagery as he walks through a littered wasteland to find himself in the giraffe enclosure of a particularly glum looking Dudley Zoo.

The final touching image, however, is of Ray: a thoroughly sad presentation from Billingham of his own father who remains alone drunkenly reminiscing about the past until it is dark and he is lit only by the red glow of yet another hideous faux-fireplace.

Ray & Liz is showing at The Electric Cinema now, and The Mockingbird between 19-21 March. Billingham’s photography is part of the permanent collection at the Saatchi Gallery, King’s Road.