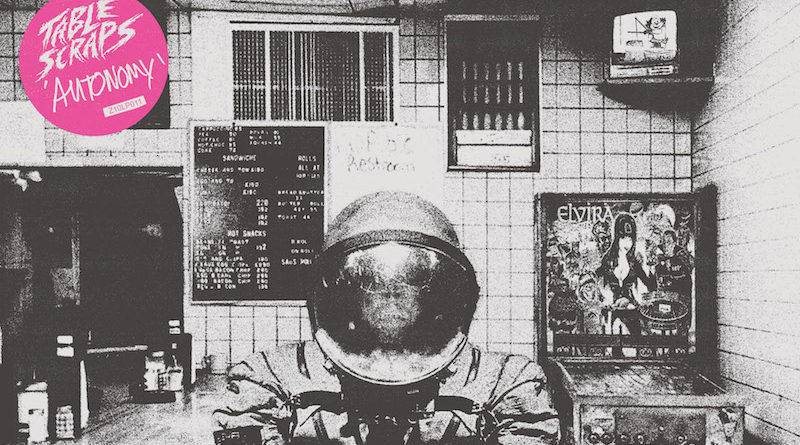 Coming from a city that has rock legends such as Black Sabbath and Led Zeppelin forming a part of its legacy can be daunting for musicians attempting to make their own way in the music world. The standards to reach are undoubtedly high to be able to get anywhere close to rock ‘n’ roll greatness. Its with much delight that Birmingham trio Table Scraps look set to succeed on that journey with their self produced second full length album, Autonomy, due for release on February 23rd via Zen Ten Records.

Having previously supported The Stranglers, Fat White Family, Buzzcocks and currently preparing to open the shows for Monster Magnet on their European tour, Table Scraps are on course to increase their well deserved reputation for frenetic, carnal fuzzed live shows with their blisteringly addictive upcoming release of garage rock debauchery.

Track opener ‘Sick of Me’ delves the listener straight into their vigorous mayhem with it’s sense of urgent aggravation evolving into the vengeful stomp of the double vocal ‘Always Right’. The self-loathing, paranoid jangle of ‘I’m a Failure’ is a slower offering, strewn together with a heavy bass rumble and the DIY rawness that Table Scraps do so well. The bands Punk tendencies are eagerly twisted through disdainful vocals and sharp, trashy guitar on the rapid paced ‘Lyin’ Thru Yer Teeth’ along with the theremin frenzied, vehement rampage of ‘Treat Me Like Shit’.

The first single from the album, ‘My Obsession’, has all the brooding bass grooves that anyone could want and an eerie psych climax is hit with the greasy riffed, quick-fire acceleration of ‘Frankenstein’. Final song ‘Do It All Again’ also works as an instruction to the listener; an upbeat, dance-able album closer nodding towards the influence of 60s bands such as The Seeds, with a contagious beat to ensure a hit on the replay button. The album is a dynamic, sharp, honest and unpretentious example of what uncompromising DIY garage rock should sound like from a band on course to becoming one of Birmingham’s greats… so hit play and crank it up!

Like what you hear? The band take to the road this month and will be celebrating the release of Autonomy with an album launch party at the Hare & Hounds on Friday March 2nd. Brought to us by promoters This Is Tmrw, with a top-notch support line-up of The Hungry Ghosts, Captain Suun and Yo No Se, this will be a night not to be missed and a chance to witness Table Scraps in all their live scuzzed-up, reverb drenched glory before larger stages beckon.

Tickets are available via Skiddle and full tour dates are below.