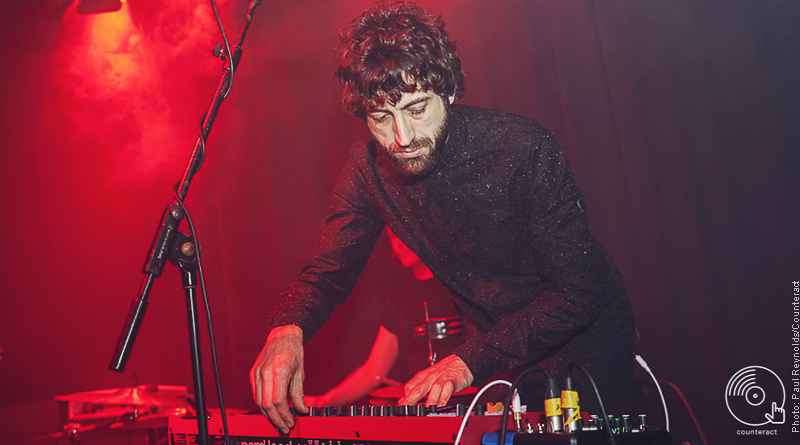 First band to play were the youthful Birmingham foursome, The Lizards. Fresh from their recent performance at this years Dot to Dot Festival in Nottingham, The Lizards delivered a calm and collected, jangly 1960s psychedelic pop inspired set. The band’s 6 song performance included the singles, ‘Strange Love’ and ‘All My Friends Are Lizards’, each one layered with hazy vocal harmonies, a satisfying amount of echoing guitar and a 1960s vintage ambience. With more gigs planned, any fans of psychedelic pop acts such as, The Byrds and The West Coast Pop Art Experiment, should make sure they catch this band live.

Next up were local three piece, Crawlin Hands. Bringing a slightly heavier sound into the mix, the hefty bass-lines, soaring vocal and stomping guitar riffs, along with the winding instrumental intersections, evidenced an alternative variation of psychedelic rock that mirrored both the grunge-like influence of bands such as, Audioslave, along with the hypnotic musical improvisations evident of the stoner/Krautrock style. They included their songs, ‘Stare at the Sun’, ‘Spitting Blood’, and the upbeat new release, ‘Bloodlines’, which succeeded in getting the crowds heads appreciatively nodding along. The band comfortably powered through their 5 song set and left the stage looking triumphant amongst a storm of feedback.

The third band to take to the stage were Skeleton Key Records recent signing, Cut Glass Kings. Already making a name for themselves in the Midlands and beyond, the band lived up to expectation and gave a faultless performance with an air of unrivaled confidence. Their sound consists of an eclectic mix of styles ranging from the British pop aesthetic of The Beatles ‘Revolver‘ era, to the funky bass imprint of Curtis Mayfield’s, ‘Pusherman’, all working together to result in a catchy, lo-fi psych sound full of dreamy vocal and distorted yet lightly meandering guitar. They played 7 songs including the single, ‘Only a Daydream’, the relaxed haze of ‘Drifter’ and ended their set on a high note with crowd members dancing and whistling for more. Causing a stir around Birmingham and beyond in recent months this band are proving themselves as being destined for great things.

Nottingham’s own, darkly experimental psychedelic foursome, The Cult of Dom Keller, took to the stage amongst a shroud of red mist around 11pm. The masters of sonically distorted tension and ethereal sound-scape melody, began their musical journey to a drone of whirling synths and long drawn out fret board fuzz in front of the packed out room. Their introduction easily living up to their own description of the music being, ‘born from another universe, all from the confines of their sonic bunker’. The band’s set consisted of 10 songs although, with each one being a continuation of the previous, their performance as a whole was a lengthy transcendental heavy psych epic, as oppose to a traditional set with breaks and the entire gig worked all the better for it.

With the release of their third album imminent, ‘Goodbye To The Light‘ through Fuzz Club Records on 22nd July 2016, the band gave a focused and energetic performance, particularly with the bassist taking centre stage and being the divide between the cosmic drones and guitar fuzz of the left and the dreamily surreal vocal harmonies from the right. The band channeled through the lysergic flow of ‘Behind All Evil is a Black Hole’ before striking great heights with the new album opener, ‘Shambhala Is On Fire’. It is known that The Cult of Dom Keller are not afraid of taking risks with musical experimentation and the sheer power of the multi-layered noise they create is certainly worth the amount of amp repairs they reportedly have to pay out for. The band finished their set with the darkly sinister yet hypnotically churning ‘Swamp Heron’, followed by the faster paced, fuzz laced shake of ‘Worlds’.

The music they create has an undeniable element of 1960s psychedelia although nods more towards the darker Aleister Crowley influence rather than the peace, love and flower power traits traditionally synonymous with the psychedelic genre. The whole performance proved to be a delectable mix of dark layered psyched out fuzz with enough cosmic edge and euphoria to satisfy the most avid of Ken Kesey appreciators. Given that the band have already performed at large international events, such as, Austin Psych Festival and Liverpool Festival of Psychedelia, I would recommend any heavy psych fans invest in their new album and make a visit to their next gig a priority.