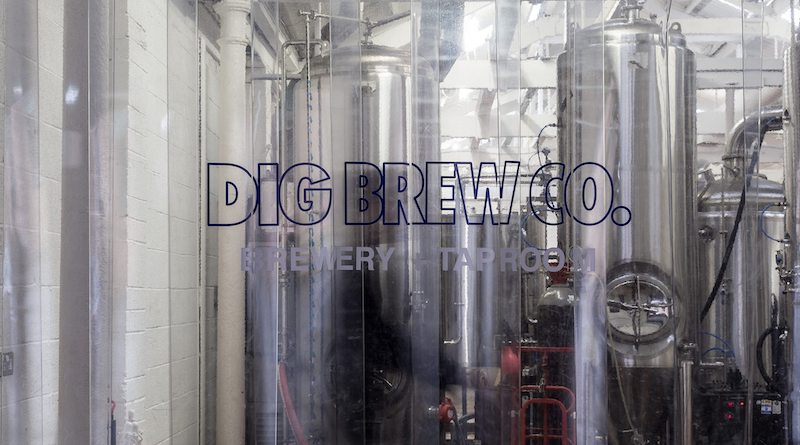 The craft brewery on River Street in Digbeth has been invited to brew three new beers on a commercial scale for 70,000 people at a leading Belgian brewery as one of the four winners of this year’s Raise the Bar award. The prize also includes an invitation for Dig Brew to showcase its beers at some of the UK’s leading craft beer festivals in Edinburgh, Bristol, Birmingham and London.

The competition, run by craft beer festival organisers We are Beer in association with the UK-leading craft beer subscription service, Beer 52, was open to breweries that are less than two years old and attracted more than 65 entries.

OPEN TODAY 2-8 PIZZA AND PINT £10. In bright and early this morning getting everything turned off for our 48 hour christmas break. Beers here: OPTIMO 5.2% DDH pale, California (Blueberry) 5.2%, Space is the Place 4.5% cask, Blind Country 6% cherry stout.

Greg Wells, We are Beer founder and one of the judges, said: “Consistently nailing hop-forward pales and IPAs as well as roasting stouts, Dig Brew’s branding isn’t the only thing putting them in the same league as some of the US’s great brewers.”

Dig Brew will travel to the world-renowned Brouwerij De Proef (home of the likes of Mikkeller and Omnipollo) in Belgium next month to collaborate in the creation of three beers that will be delivered to all 70,000 of Beer 52’s UK subscribers.

Oliver Webb, who founded Dig Brew with the support of Peter Towler of Mad O’Rourke’s Pie Factory in Tipton last year, said: “This award is thrilling news as we look to establish ourselves within the craft beer movement and export our beers worldwide. Credit goes to our brewing team and the support of iZettle in helping us to boost our range, quality and brand presence.”

Oliver added: “Working with De Proef will result in a guaranteed 210,000 of our beers being drunk across the UK, while participating in some of Britain’s biggest craft festivals will bring our beers to the attention of buyers from across the globe.”

Dig Brew brews and distributes a constantly changing range of seasonal lagers, stouts, sours and pale ales to pubs, bars and off licences nationally from its converted industrial premises. Open to the public on Fridays (from 4pm) and Saturdays (from 12pm), it also runs a pizzeria on the premises, as well as a bar, and organises a regular programme of food, drink, music and art-based events.

Tickets for the craft beer festival in Birmingham are available from beercentralfestival.com, and you can keep up to date with Dig Brew Co on their Instagram.