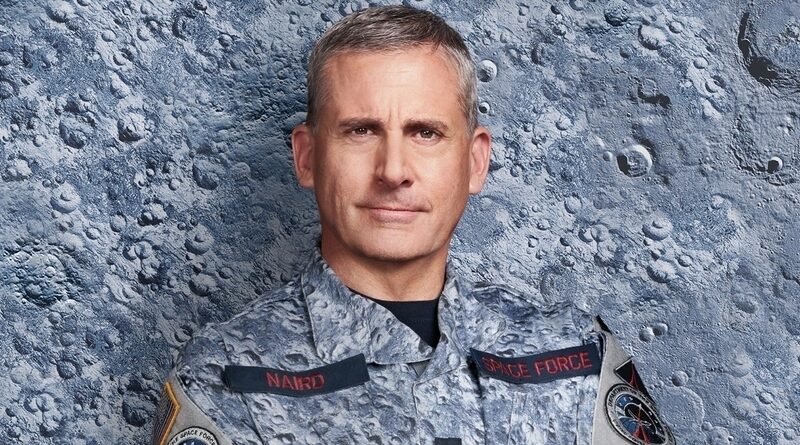 The announcement of Donald Trumps U.S. Space Force felt like the sort of pig-brained lunacy you couldn’t make up. Sadly, Space Force shows you can’t really make fun of it either.

Not too long ago, in a galaxy eerily like our own, Donald Trump founded the first new branch of the US military since 1947, Space Force. The time, specifically, was December 2019 but the place surely bares no connection to our own reality. Bequeathed with a logo that looks suspiciously like the Starfleet badge from Star Trek, and tasked with a distinctly militarised colonisation of space, the project has the air of a practical joke, or a particularly innovative and immersive theatrical production of Starship Troopers.

It feels a little bit like taking the red pill, then, to realise that the project is real. And because it is a universal law that if something exists there must also be a parody of it, the new Netflix series, Space Force, is here to fill the gap. The show has been created by The Office alumni Steve Carell and Greg Daniels, with Carell also starring as the show’s lead, Mark R. Naird.

As head of Space Force, Naird must juggle career responsibilities with a home life that includes a socially outcast daughter and an incarcerated wife. This largely takes the form of a workplace comedy, but the show is not so much The Office as The Oval Office, as it clearly has one target in its sights. Yet while Space Force may know who it wants to be the butt of its jokes, it doesn’t know how to tell them. Frequently the humour is tired. There is one recurring joke about characters entering Naird’s office uninvited that isn’t funny the first time, let alone the fifth.

Thankfully there is plenty of talent in the cast to elevate the dusty script. Carell is a proven comedic actor, but he is upstaged here by John Malkovich’s scientist who plays the reasoned, rational mind to Naird’s incompetent bluster. The dynamic between these two characters is central to the show, and manages to keep it going even when the humour dries up. There is no reason these two characters should get along, but just at the moments where it seems their relationship could snap, they find some common ground and reaffirm their bond, becoming increasingly reliant on each other.

Also of note is Fred Willard in his final role. His brief appearance as Carell’s dithering father is a rare comedic highlight. Less successful is Lisa Kudrow’s turn as Naird’s imprisoned spouse. She has so little screen time or character development that the decision to cast such an established actress is mystifying. This is made even more egregious when compared with the excessive screen time an apocalyptically annoying Social Media Executive gets. Every time he appears it feels like being punished for sins in a past life.

Plenty has been written about the struggles of satirising the Trump administration. How do you create satire when reality is so ridiculous? Interestingly, Space Force seems to stumble on an effective approach in its genuinely funny second episode. In an extended sequence featuring Marcus, a monkey who is “not an animal, he is a spaceman,” a level of farce is achieved that perfectly captures the absurdity of the Space Force project as a whole.

What makes it so effective is that, more than at any other moment in the show, instead of laughing with the characters we are laughing at them. This is what can make Trump so funny: the inability to see his own absurdity. And the larger this disconnect between how a person sees themselves and reality, the funnier it is.

In this way, the sequence effectively mimics Trumpian dynamics and, if anything, heightens them. If this presents farce as perhaps the best way to satirise the Trump administration, it also explains why many of the shows other jokes fall flat; the expectation-reality disconnect isn’t wide enough, if indeed it is present at all. In short, Trump is unintentionally funny and Space Force is unintentionally unfunny.