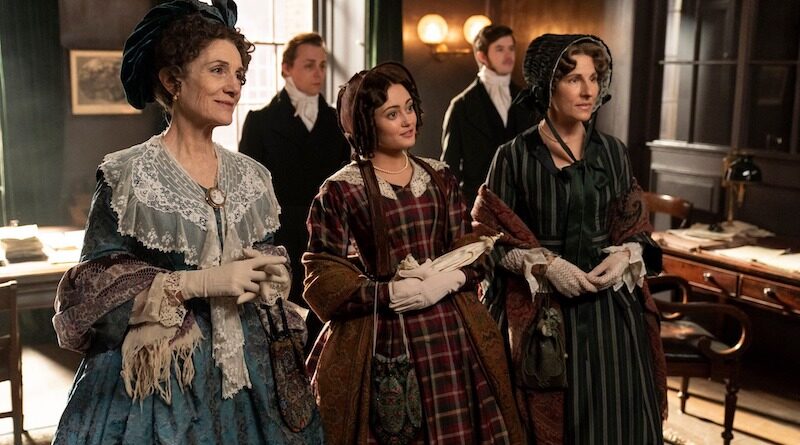 Deceit, death, dark twists – and afternoon tea. The ingredients of a gripping period drama, or a clichéd disappointment?

At 8.59pm on Sunday, the nation waited with bated breath, poised on the edge of our sofas, imploring Julian Fellowes to inject some joy into these bleak times. Make self-isolation bearable, Julian. Don’t let us down. Perhaps what we really wanted was a sarcastic quip from Violet Crawley, or some necessary words of wisdom and a reassuring glance from Carson. But whatever it was we needed, it was imperative that Fellowes did not let us down.

Naturally, with an indefinite period of social distancing ahead of us, it didn’t really make a difference whether we liked it or not. We knew we’d be in it for the long-haul.

The opening episode of Belgravia spans across a twenty five year period; beginning on the Eve of the Battle of Waterloo in Brussels, before hopping forward twenty-five years and relocating to the affluent district of Belgravia, London. The events that preceded the Battle are crucial to the plot, as secrets kept for nearly three decades threaten to be revealed and entwine the lives of the residents of Belgravia in devastating ways.

Whatever your opinion on the opening episode of Belgravia, we can all agree that it was certainly not short of a budget. An elegant ball, elaborate outfits, an infinite number of bonnets (which must have accounted for 95% of the budget?), and it was evident that we were back in business. It would seem almost cruel and un-British to not start the show with a completely inappropriately timed ball; a group of English people dancing like it’s not the eve of a battle was the perfect start to the show. It was almost humorous. And when the next social gathering was an afternoon tea full of posh old ladies in bonnets, you could almost hear the American audience cheering.

But this was probably the last time I smiled during the episode. The death of young Lord Bellasis, followed by the death of young Sophia Trenchard in the arms of her weeping mother, and a moving conversation between two grieving mothers twenty five years after the tragedy – during which they share a heart-breaking glance as Harriet Walter’s character admits “I’ve learnt that it never goes away” –  was enough to really grasp the essence of Belgravia: it really is no laughing matter. And when it transpired that the young love which bound the show together and interlaced the lives of those in Belgravia was in fact all a sham, the show grew ever colder.

But the clichés, the darkness, and the lack of sense of place are not necessarily reasons not to give Belgravia a chance to thaw. Indeed, the stellar cast itself is enough to keep you intrigued – Tamsin Greig and Philip Glenister make a dynamic duo, and Fellowes still possesses that unique ability to encapsulate every essence of the character the instant they appear on our screen. It’s thrilling, if not slightly unnerving.

The hope is that Belgravia will come into its own in the coming episodes; that it will open its gates, doors, roads, whatever, and let us inside. It is tricky to know what to make of the characters yet, and we were only granted a brief glimpse into the servant quarters that was likely just a teaser of what is to come.

If you need something to pick you up and lift your spirits during these times, steer clear of Belgravia. But if you’re looking for something to occupy your time and keep you engaged during an indefinite period of social isolation, it’ll certainly do.

You can catch Belgravia on ITV on Sundays, 9pm. Watch the first episode now on ITV Hub.