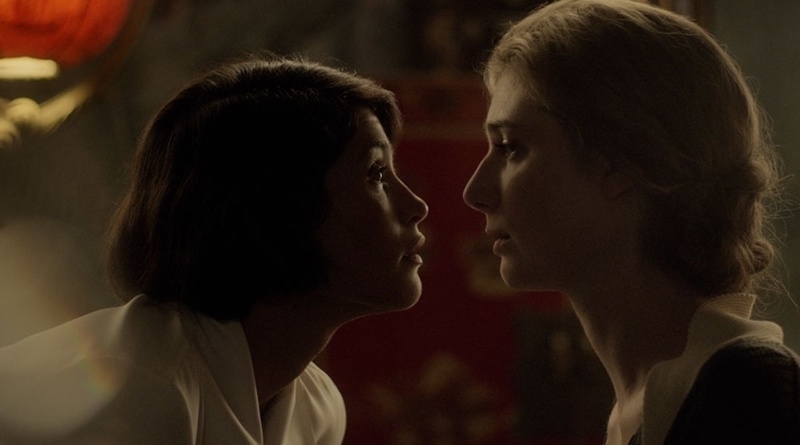 “I am reduced to a thing that wants Virginia. I composed a beautiful letter to you in the sleepless nightmare hours of the night, and it has all gone: I just miss you, in a quite simple desperate human way.”

As you might expect from writers of such skill, the letters of correspondence between Vita Sackville-West and Virginia Woolf penned to one another during the 1920s, are of exquisite beauty. After meeting Virginia for the first time, Vita was instantly enamoured, writing to her queer husband “I simply adore Virginia Woolf, and so would you. You would fall quite flat before her charm and personality.”

The love letters offer a unique glimpse into the affair of two well-known literary figures, and as such form the basis for the play, Vita & Virginia, by Eileen Atkins. Here that play has been adapted into a feature length film by director Chanya Button, her second feature after 2015’s Burn Burn Burn.

If it’s the job of filmmakers today to make old stories feel new, and to breathe life into history, then Vita & Virginia is undoubtedly a success. The affair between the two leads feels breathless. Vita, played by a charismatic and charming Gemma Arterton, is an irresistible whirlwind of flirtation and fancy, and so it’s utterly believable that a quiet and withdrawn Virginia Woolf (sensitively played by Elisabeth Debicki) is pulled out of moments of paralysis and melancholy by her exciting new friend.

Their love story could so easily have been brought to the screen in a fusty, grey-pound seeking adaptation of mild-manners and restraint. Instead their passion seems to build to unbearable levels of frustration. Helping to build this intensity is a melodic and often beautiful score from Isabel Waller-Bridge (whose name may sound familiar to Fleabag fans). The music is absolutely remarkable.

So to is the look of the film. Some of the costumes in particular stand out as both contemporary and yet unmistakably 20s. There’s a huge amount of style and panache, (the title card alone is a work of art) however the film never really dives into Woolf’s mental health other than a few stylistic flourishes consistent with the clichés of a tortured genius. Regardless, they do perhaps serve to remind you as to just how unique Woolf’s view of the world was.

Woolf would eventually choose to end her own life, filling her pockets with stones and walking into the River Ouse. Her battle with what would likely now be labelled as bipolar disorder ultimately led her to do this, but it is not properly dealt with here, which is surprising given the effectiveness with which the film portrays the love and lust of its two protagonists.

The intensity of their feelings for one another are so beautifully displayed that it seems a shame the film couldn’t find more time to show Woolf wrestling with herself. Much of that is left to Debicki to hint at, and her performance is subtle and physical, with long distant gazes and a naturally awkward gait allowing her to show a Woolf uneasy with the world around her.

Having said that, the film is not an exhaustive study of one of literature’s giants. It is a love story, and as a love story, it does what it sets out to do. It makes you believe in their love. And why should her mental health be singled out as more important than the woman she loved? After all aren’t “all extremes of feeling…allied with madness”? (Orlando, Virginia Woolf).

Vita & Virginia is on wide release across the UK from July 5th, and will be showing at The Electric from July 19th.