Sacha Baron Cohen's most famous creation makes his often hilarious return, but is Borat too well known to fool anyone?
Skip to content 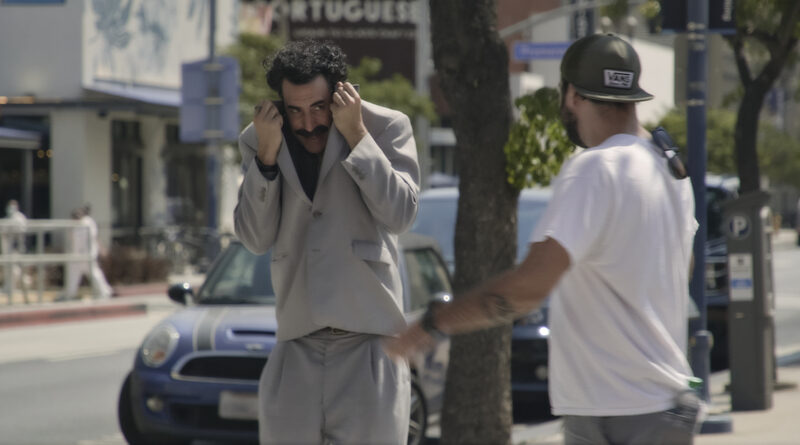 Sacha Baron Cohen’s most famous creation makes his frequently hilarious return to small screens – but is Borat too well known to fool anyone?

Borat Subsequent Moviefilm, the latest effort from Sacha Baron Cohen, faces something of an identity crisis. Since the release of 2006’s Borat: Cultural Learnings of America for Make Benefit Glorious Nation of Kazakhstan (draws breath), Baron Cohen’s output has produced, perhaps with the exception of 2018’s Who is America?,  a series of diminishing returns. One of the problems has been his reliance on shock, which is never as effective the second time. Another is that Baron Cohen’s format relies on anonymity, and he is just too well known. This makes the return of perhaps the comedian’s best known character somewhat surprising.

Indeed, Borat was publically retired in 2007, with Baron Cohen admitting it had become harder to have a “gotcha” moment when everyone is in on the joke. To overcome this, Subsequent Moviefilm directly addresses Borat’s notoriety, as he goes undercover as a variety of characters such as ‘Country Steve’, a right wing country singer (“I ain’t lying, aint no jokes, Corona is a liberal hoax”). Attention is also diverted from the character through the presence of his daughter, Tutar (Maria Bakalova), whom Borat sees as his key to redemption from the shame brought on Kazakhstan by the release of the original film. How is he going to find this redemption? By selling her to an old, rich American, of course.

Bakalova is excellent, throwing herself wantonly into a number of potentially compromising situations. One genuinely toe-curling scene featuring a fertility dance at a genteel southern ball is a particular highlight. The presence of Tutar also provides a narrative backbone that was absent in the first film, and delivers moments that are surprisingly heart-warming.

The issue, though, is that the better Bakalova is, the more the validity of Borat is thrown into question. What is the point of the character if he is upstaged? Much of the discussion around the release of Subsequent Moviefilm has been around how vital the character is, particularly with the upcoming election. But, given that many of Borat’s scenes within the film are scripted, and many of its set piece moments do not feature Borat as Borat, I’m not sure this is the case.

This is compounded by the fact that, although it sometimes comes close, this film just isn’t as shocking or funny as the first. Nowhere is this more apparent than in the much dissected sequence with Rudy Giuliani. The scene features Giuliani, after being interviewed by Tutar, allegedly reaching down into his trousers in the presence of the 15 year-old. Giuliani claims he was removing his microphone and, perhaps to the chagrin of many, this appears to be the case.

This is not to say Giuliani comes out of the scene well. His flirtatious nature with someone who is portrayed in the film as a minor (Baklova herself is 24) is concerning. But this is not the moment of controversy it is portrayed as, with some carefully curated editing providing an air of menace that is not really there. The centring of this scene in the film’s marketing only serves to emphasise the fact that it doesn’t quite reach the satirical highs to which it aspires.

Perhaps it is time for Baron Cohen to explore different forms of media. Maybe, given his speech at the Anti-Defamation League last year, it is time for him to branch into social media. Borat already has a Twitter account, and this is potentially fertile new territory. The comedian’s chameleonic nature has, ironically, resulted in him producing characters that are so well known they have become rigidly defined. This may all seem to imply that Moviefilm is a negative experience. This is not the case. It is funny, occasionally hilarious, and features an ingenious final twist. But there is a sense that a Borat Subsequent Subsequent Moviefilm might be a stretch too far. Maybe it’s time to retire the character a second time, then.