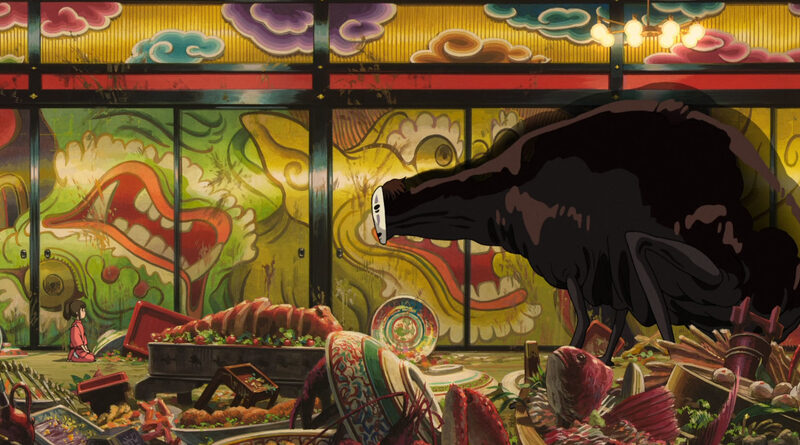 In our first edition of Studio Ghibli Sundays, Hope Talbot asks how Spirited Away has impacted the medium of animation and its potential for satire.

The infamous Studio Ghibli production from Hayao Miyazaki, Spirited Away, is undoubtedly worthy of its masterpiece status; it is ethereal, and disarmingly beautiful, with much of its critical acclaim being solely attributed to its uniqueness and routinely brilliant Ghibli aesthetic.

At its most basic, Spirited Away is the story of Chihiro, a little girl who has to navigate the spirit world to free her parents, working in a bathhouse run by an overlord called Yubaba. At its greatest, it is a remarkably distinctive story that could only ever truly exist within the boundaries of the Studio Ghibli style. However, it is in what lies beyond these aesthetics, within the surreal storylines and caricatures, that we begin to discover the satirical edge which contributed to the gargantuan success of Spirited Away.

When considering satire as a genre, a Japanese animated film for children isn’t the most obvious of choices, and yet, ironically, it is the most fitting. Satire is so often scathing, and darkly political, especially when considering the infamous Orwellian satire novels 1984 and Animal Farm. Satirists view human nature as a dark enemy, rolling out impersonations of authority figures to deliver gut-punching critiques. 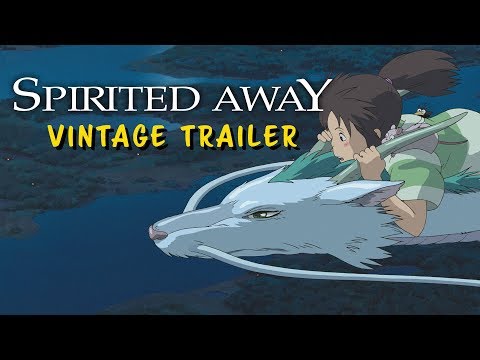 However, in Spirited Away, the satirical hints that Miyazaki supplies are quietly poetic, precisely due to the fantastical nature of the Studio Ghibli style, reflecting the synchronicities of human identity. The film provides a complex view of morality and redemption, all held in the charming creativity of the animation, allowing both scathing realism and beautiful escapism.

The context within which Miyazaki was creating was one of financial and moral turmoil. With the 1990s being termed “the lost decade”, the “bubble” economy of the 1980s had burst, with Japan suffering from mass unemployment, as well as coordinated terrorist attacks from the Aum Shinrikyo. In the wake of this, Miyazaki channelled this period of uncertainty into something charmingly uplifting, and thus, Spirited Away was born.

Many of the moral lessons regarding Miyazaki’s criticism of capitalism in Spirited Away discuss the turmoil of Japan in the early 2000s, but also ring true today, despite being produced almost two decades prior. An overarching theme of the animated masterpiece is its critique of modernisation and the loss of traditional values, especially given the West’s increasing influence in Japanese culture.

As Chihiro’s parents travel along the path leading to the abandoned theme park, various emblems of traditional morality line the way. A Torii gate, originally a symbol from the indigenous Japanese Shinto religion, signifies the entrance to a shrine, suggesting an area of contemplation and respect. Scattered along the path are miniature houses, again referring the Shinto religion, symbolising the homes of guardian spirits.

Her parents recognise the symbols of the Shinto religion, with her mother stating “some people think spirits live there”, but do not indulge in its practice, as it is not a known object to Chihiro. Despite this level of recognition, her parents disrespect the area, stealing food, and over-consuming, rather than paying homage, and are thus punished for their behaviour. 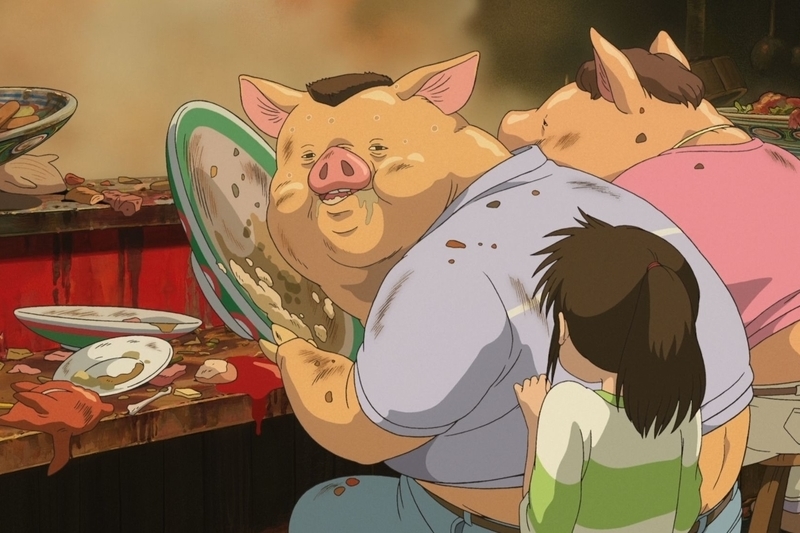 Miyazaki isn’t always the most subtle with his visual metaphors

In demonstrating this level of cognitive dissonance, Miyazaki suggests how the influence of Western ideas on post-war Japan has led to the abandonment of traditional morality. Moreover, Chihiro’s journey into the spirit world might be a greater metaphor for the transition that Japanese society must undertake in reconnecting to the traditional morality of the past. In this way, Miyazaki suggests that Japan must reconnect to traditional Eastern morality, to control and combat the issues of Western capitalism.

A major theme within Miyazaki’s criticism of Japan’s capitalist society is the concepts of consumption. The most obvious critiques come at the beginning of the film, in which Chihiro’s parents are turned into pigs as a consequence of their overconsumption of food from the spirit world. The pig is a famed symbol of capitalist criticism, often demonstrating greed and misuse of wealth. This is particularly apt given the misuse of wealth seen throughout the film, particularly in its use for destructive behaviour.

Overconsumption and the misuse of wealth is portrayed through the character No-Face, and his relationship to Chihiro. Both characters experience profound loneliness and a loss of self, which they attempt to fulfil in very different ways. No-Face attempts to fill this void through overconsumption, basking in false adoration, masses of food, and even consuming workers to feel fulfilled.

In this way, No-Face is a representation of vanity, and materialism in the late-consumerist period. His inability to gain friendship and love in the same way Chihiro has, leads to his attempts to gain them through mass consumption. The money he provides makes the workers blind to his greed, as they too are consumed by their selfish desire for wealth. When he becomes a companion to Chihiro he finds emotional fulfilment, and can suppress urges to consume. This is a fascinating portrayal of finding purpose beyond consumption, as love and companionship becomes a rebellion against capitalism. 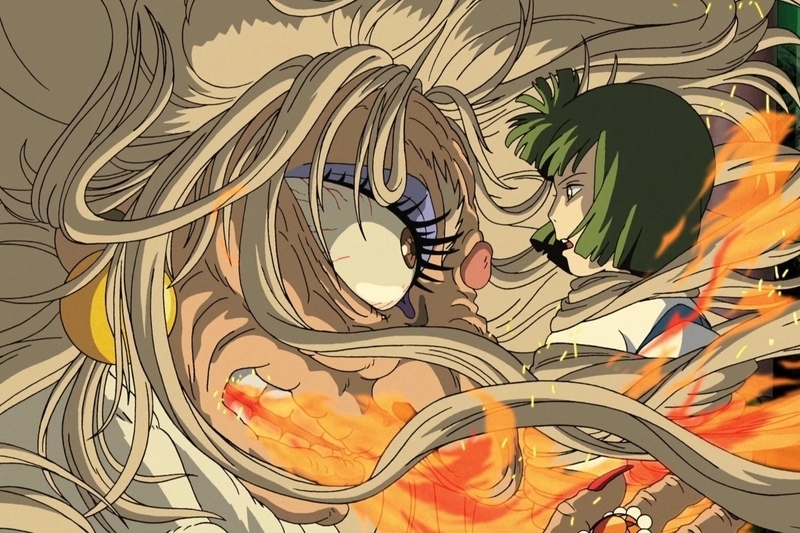 The impact of capitalism on ego and self-perception are vastly explored within Spirited Away, particularly regarding individuality. As Chihiro must adapt to the rules of the Bathhouse and the tyrannical rule of Yubaba, she is confronted by an immense loss of self. To save her parents, she must work within the bathhouse and give up her original name, or she will cease to exist. In submission, she must also sign away her name, and therefore her identity. To later escape, she must remember this name, and this identity, or else she cannot be free.

The loss of self at the hands of Yubaba, in this case representing the employer, has duality within modern-day capitalism in Japan. The stereotypical Japanese ‘salaryman’, the overworked white-collar employee, is typified by a lack of individuality, and an overdependence on the employer. This work ethic is often associated with the notion of karōshi, or death from overwork, with suicides in Japan being exclusively linked with this toxic work ethic. In constructing this workplace in which identity is tied to work, Miyazaki is making a powerful statement about the effects of capitalism on the individual, and how capitalism can destroy individuality, leading to workers who only identify with their work.

Ultimately, Spirited Away demonstrates how ethereal, charming and serious animation as a medium can be. Rejecting those who foolishly downplayed animation as merely for children’s stories, Hayao Miyazaki repeatedly shows how significant questions about society can be explored in beautiful and profound ways.