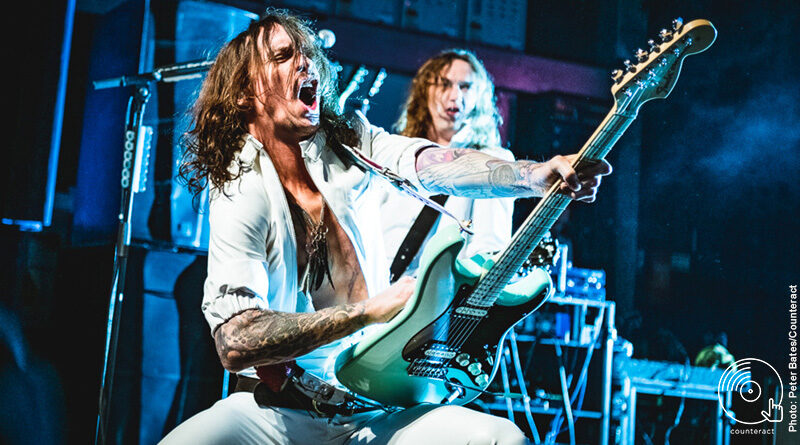 A freezing 1st December Sunday evening saw the Birmingham dark side crack out their fishnets and hit the O2 Academy for a night of mischief, music and most importantly, The Darkness.

Support came from London/Belfast duo Rews, kitted out in enough tartan, tattoos and chokers to make Green Day look like they could up their game. It was apparent immediately that the band meant business. Commanding the stage, the alt rock queens kicked off the set with ‘Rip Up My Heart’, sending shock waves through the crowd and blasting away the Sunday blues. Fuzzy guitar laying a base for dreamy melodious vocals, the rock chicks didn’t just look the part, they sounded it too. 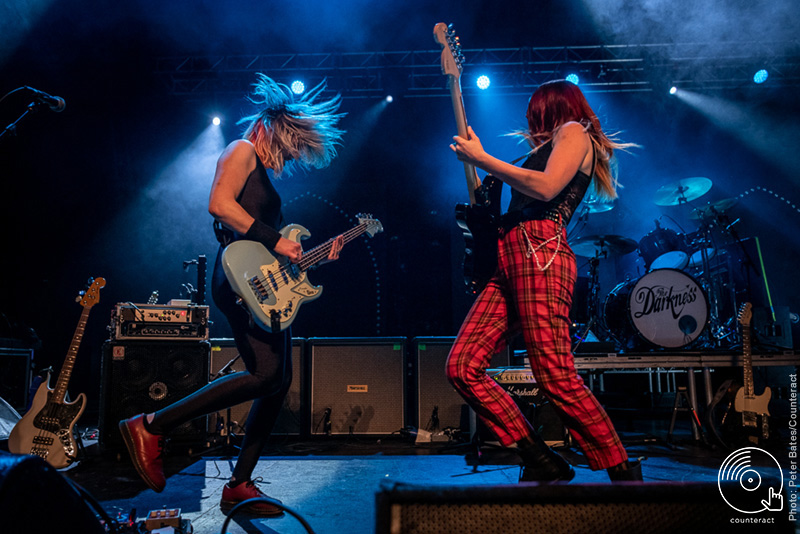 Stand out track ‘Your Tears’ was framed with growling guitar alongside lyrics demanding ‘look at me now’ in a punk rock extravaganza that flaunted enthusiasm and skill in a brilliant set. With rumours of a second album due to be released in 2020, there is a lot to look forward to for Rews.

The lights cut out and gentle, mournful acoustic music begins. The lights hit, The Darkness are onstage all but lead singer Justin Hawkins, although his all familiar eerie vocals reverberate around the room as ‘Rock and Roll Deserves to Die’ commences. Screaming “die” the rippling electric guitar hits the room and all messy hair and tight trousers Justin saunters out. Birmingham is ready to rock. 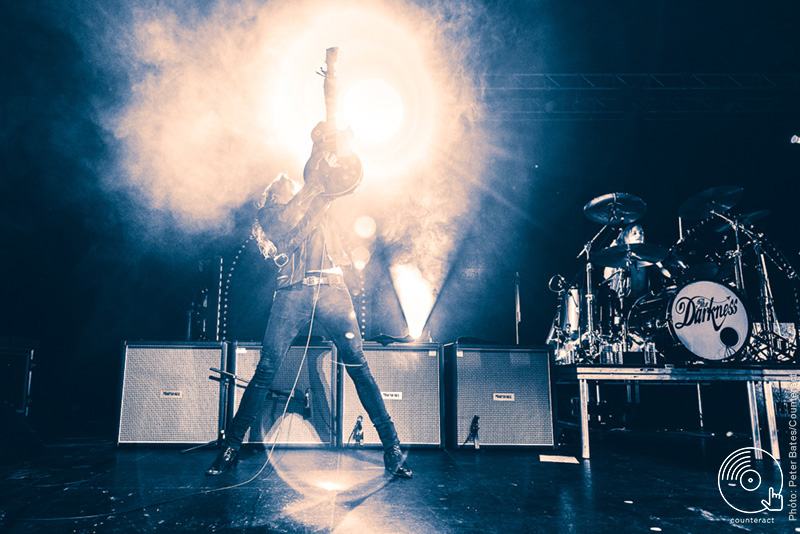 The atmosphere of the O2 Academy is thrust from 0 to 10 in seconds as the band throw themselves around the stage, reassuring the city of metal that they’re in for an experience. The song is a hit from the new album Easter is Cancelled and Justin explains after the track that the evening will be split into two sections, the first half will be for the new album and the second half will be reserved for the band’s older classics. A brave move to play a new album exclusively without intertwining it with well known crowd pleasers, but the foursome’s quiet confidence and cheeky charm, alongside the screams from the audience when the new album is mentioned, confirms that with nearly twenty years of experience, they know exactly what they are doing. 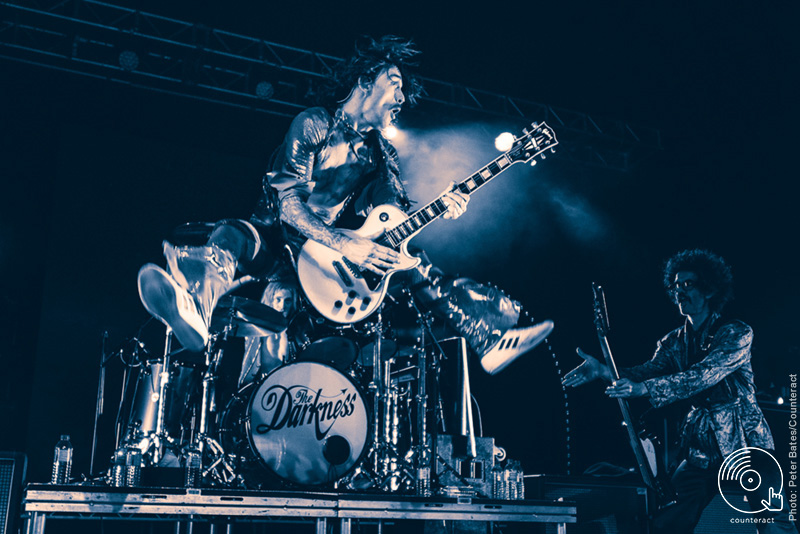 It becomes pretty clear, pretty quickly that watching The Darkness is like going to a musical circus. Extrovert costume changes, acrobatics (that even involve Justin holding himself in a handstand with his legs in a v shape in the air) and an entertaining background of childhood photos, complete with fantastic light show. Rather than the strutting leather clad divas listeners may expect from a rock band, The Darkness made it accessible, inviting fans to an all inclusive circus without an ego in site. It was a spectacle and fans were constantly wondering what would happen next. 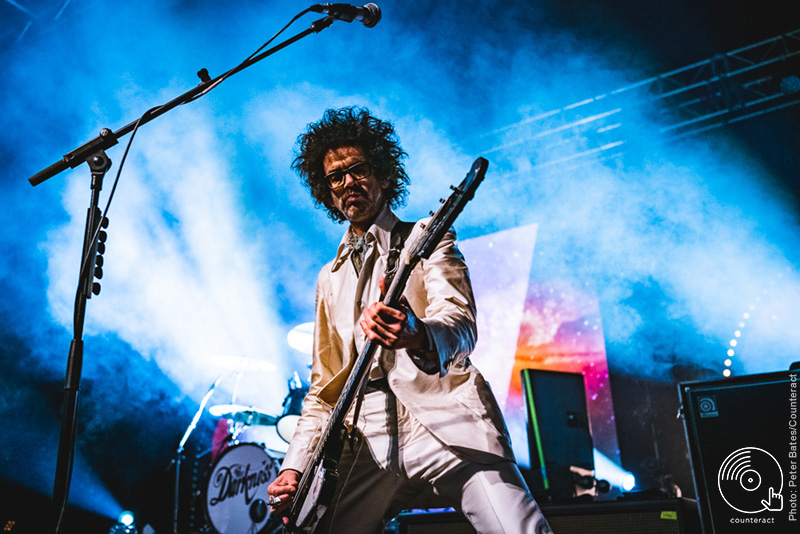 The band flowed seamlessly through their new album from the emotionally epic rock anthem ‘How Can I Lose Your Love’ all the way to the synthy guitar heavy finale ‘We Are The Guitar Men’, a love song to their six stringed lovers.

The intermission backdrop is now onstage as the band leave for a costume change. The anticipation in the room is electrifying as the band return in red bodysuits. Kicking off with ‘One-way Ticket’ life is injected into audience members that did not yet have their arms in the air and the mosh pit recommenced. Stand out track of the second half was notably ‘Get Your Hands Off My Woman’ a dirty, gnarly and incredibly funny song, which can only can really be perfected with a strong skilled musical backing which was apparent. Their technical skill and experience was noticeable by watching the controlled chaos that ensued, an example of a band at the top of their game. The song additionally featured Justin on a security guard’s shoulder doing a tour of the audience. Of course. 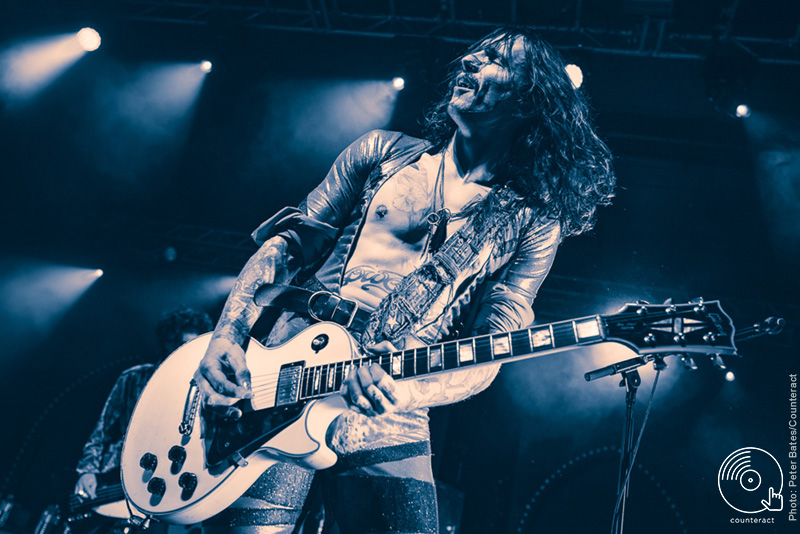 “I Believe in a Thing Called Love” – arguably the band’s most popular track– ended the set with a reception to be expected. Then forget mince pies and carols, the encore began with the fantastically festive “Christmas Time (Don’t Let the Bells End)” because nothing quite saying Merry Christmas like a sweaty mosh pit and a half naked Justin Hawkins in a red bodysuit. Into the grand finale “Love On The Rocks With No Ice” finished the performance in style and debauchery. An extravaganza that reassured fans that The Darkness aren’t going anywhere any time soon.

English graduate with a similar music collection to your mum. Rod Stewart’s certified number one fan.

English graduate with a similar music collection to your mum. Rod Stewart's certified number one fan.