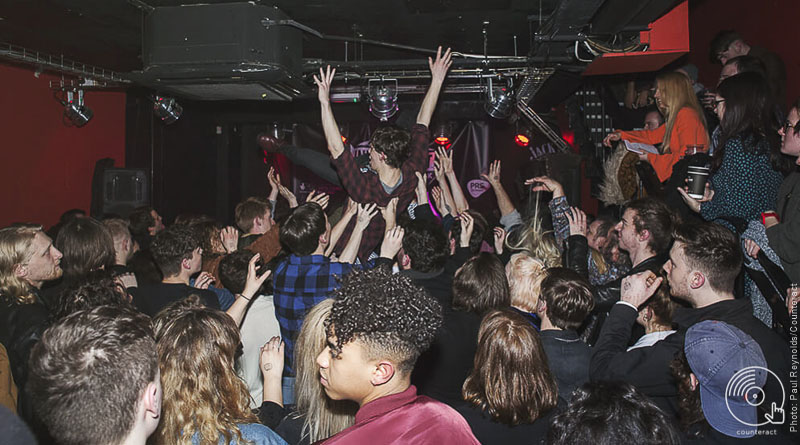 As part of BBC Radio 6 Music’s ‘Independent Venue Week‘, The Sunflower Lounge was packed with shoulder to shoulder music fans on Tuesday night, all showing support to their favourite local venue that continuously strives to be at the forefront of the independent and alternative music scene within the city. Tickets for the show sold out within 24 hours of being announced and with The Wytches temporarily downsizing from the larger stages they have graced in recent days to top the bill, it was definitely a one of a kind event highlighting the support for small music venues across the country and a night not to be missed. 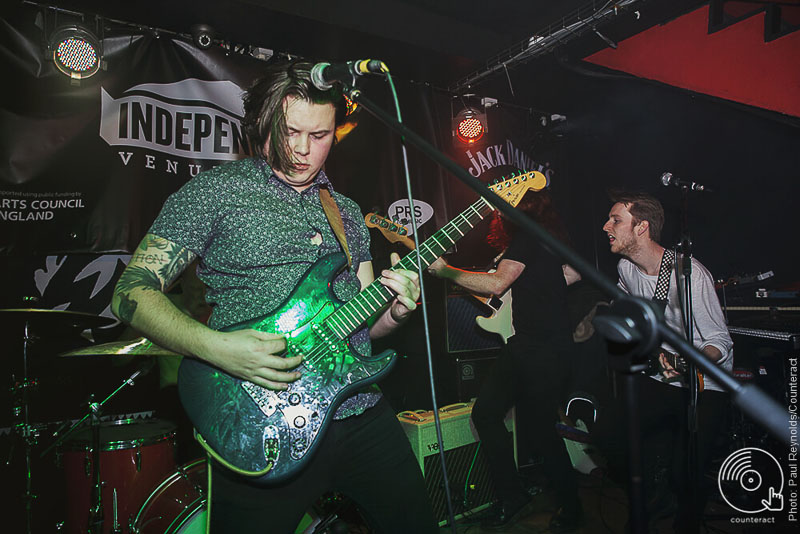 First to hit the stage were Leeds 5 piece, Fizzy Blood. Following the success of their 2016 single, ‘Sweat and Sulphur’ along with their 2015 debut album, Feast, these guys played a set filled with explosive, catchy rock riffs and a guttural vocal howl blended with a pinch of Josh Homme stomp and swagger. Despite the room only being half full at this point, the band played their set with the same fierce intensity as a rock band playing to an audience of thousands. It is clear to see why they have been previously described as, ‘A fiery blast of rock that marks them out as the heirs to Pulled Apart By Horses’ throne’ and if anyone in the upstairs bar was wondering if the gig had started yet, it would not have taken them long to realise the party had begun when Fizzy Blood began their limitless rock ‘n’ roll frenzy. 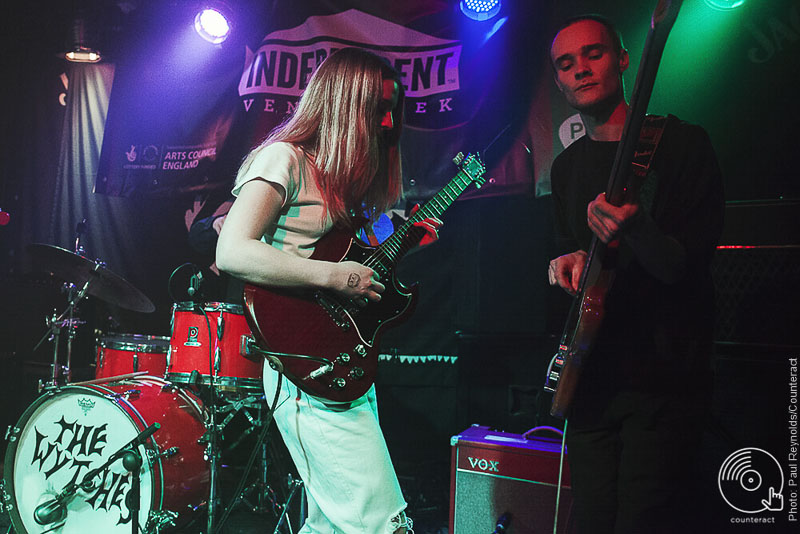 Next up were Brighton 4 piece, Thyla. Slightly stepping away from the heavier music of the evening, Thyla played a set mixing the aesthetics of grunge with the grit of post-punk and the delicate overtones of dream pop. With shuffling drum rhythms, intricate guitar lines building up to a grimier chorus and petite front-woman Millie’s angelic echoing vocals resonating throughout the room, the 4 piece showed comparisons to indie contemporaries, such as, Wolf Alice, whilst still maintaining their own individual ‘angular guitar pop’ sound. Their set included the singles, ‘Car Crash’, ‘Us and Them’ and ‘Motherlode’, all played faultlessly to a room of nodding heads which was now packed to the rafters. 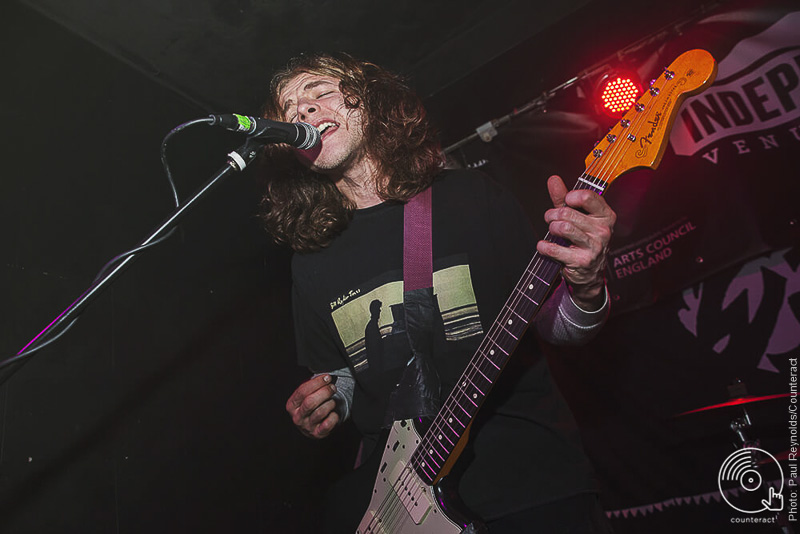 Undoubtedly, one of the reasons small venues are great for live music is the lack of barrier or divide between the band and their spectators, ultimately, creating a unity between the band and the audience. When the time came for the 4 young men currently residing in Brighton to emerge from the back room, the sweltering, crammed-in audience parted like the Red Sea to allow The Wytches to get to the stage. Beginning their set looking relaxed as ever, the opening notes of ‘Ghost House’ was all it took to make the crowd go wild and with every crunchy riff and every chord ripping vocal screech the entire audience jumped and swayed proving there was gladly no divide at this event. 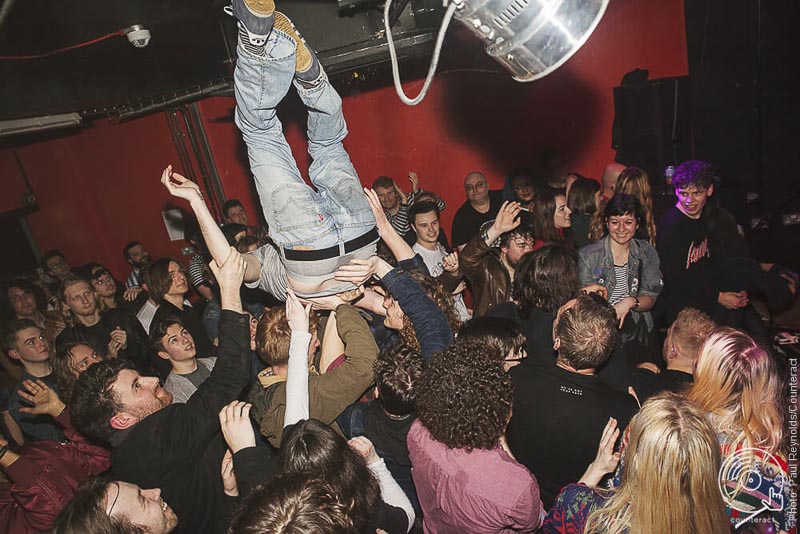 The atmosphere in the tiny venue was electric, the people at the front of the crowd were essentially, on the stage with the band and the only victim among the sweaty madness was an unfortunately placed microphone stand which took the full brunt of the mosh pit and repeatedly landed on the bass player on numerous occasions. Following the success of their second album, 2016’s All Your Happy Life, The Wytches have continuously grown in popularity, brandishing their resurrection of Sub Pop inspired grunge/garage rock at countless venues and festivals up and down the country to critical acclaim. Their frenetic live performance is something quite powerful and despite the lack of dialect between the band members and their relatively young years, they played their set with a raw and visceral energy full of erratic distortion which continuously maintained a high adrenaline level among the barrage of crowd surfing spectators. 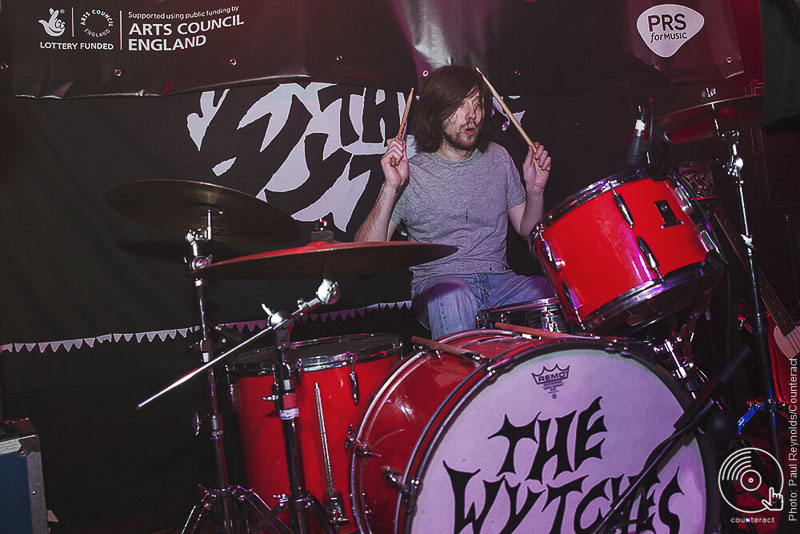 Playing a 13 song set the band happily obliged the shout-outs for ‘Gravedweller’ and ‘C-Side’ along with smugly beginning ‘Freebird’ following the customary request from one member of the crowd (please let this be Steve Lamacq). Sensing the end of the set, the crowd erupted for the final time among thrashy riffs, vocals that moved between slacker growls to enraged shrieks and enough feedback to make the length of Smallbrook Queensway rumble. Ending on a summit of appreciative audience onslaught the band put down their instruments and took the easiest route towards the door by crowd surfing out of their own gig to a rupture of ecstatic applause. 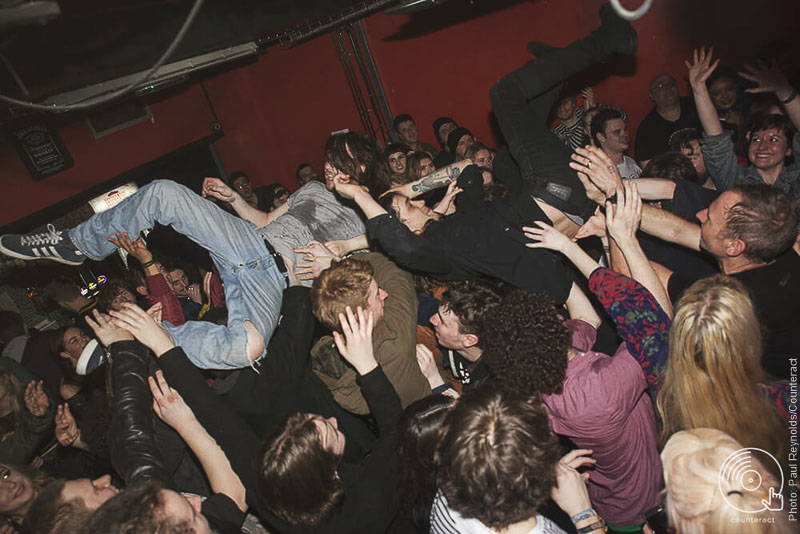