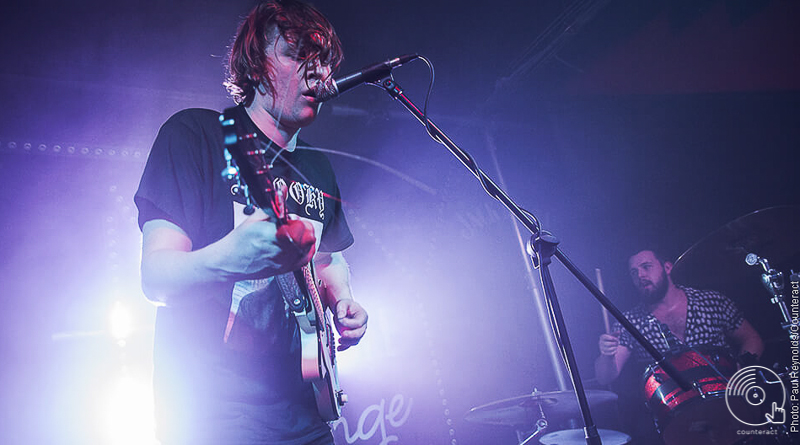 On Saturday 28th May, gig promoters, Killer Wave, along with The Sunflower Lounge played host to the EP launch party of the local band, The Mighty Young. With doors opening at 8.30pm and the added bonus of it being a sunny bank holiday weekend, the small downstairs live venue was full to capacity with a jovial and close-knit crowd all raring to get involved in a night of booze fueled musical celebration. With 3 bands on the bill and an audience that had been looking forward to the event for weeks prior, it was all set to be a fun filled evening among a familiar crowd, many of whom were members of local bands that made up a large portion of the Birmingham music community.

First band to take the stage were the mischievous trio, The Bank Accounts. Their music was light-hearted, humorous and it was great to have an opening act that do not take themselves seriously, or at least not when performing at this event. Their main incentive appeared to be getting some laughs out of the crowd and they definitely succeeded in achieving that goal. They played a set of extremely short songs (some being under 1 minute long), with a musical style that echoed the likes of left-wing folk musicians, such as Billy Bragg, minus the seriousness. Rather than singing lyrics, many of their songs contained a series of spoken word, tongue-in-cheek statements and their casual performance involved some on stage antics that kept the band just as entertained as the audience.

Friends of the headlining band and locally known garage rock trio, The Terror Watts, were next to join the party. Following their recent support slot on the same bill as Black Mekon and Bob Log III, this band are an eager bunch ready to get an audience in the rock ‘n’ roll spirit and, as evidenced on this occasion, singing along. They played an 8 song set full of grimy guitar and gruff vocals, with enough garage and surf-rock gusto to get the crowd jumping. Of course, this band are well practiced on the Birmingham gig circuit and their performance evidenced it. They played their latest catchy numbers, ‘Breakfast in Bed’ along with the upbeat, ‘Too Real’ from their demo and the slower paced, but no less fuzzy, ‘Night Tide’. With an unexpected and dirty sounding cover of Weezer’s ‘Buddy Holly’ as their set finale, their performance screamed of youthful rebellion and by the time it was over, the sweaty and energy fueled crowd were fully embraced in what awaited them from the headline act.

The Mighty Young are a Birmingham based duo that have been musical collaborators since 2004. The band took time out following their last gig in January this year to mix and record their debut EP, ‘Neptune’ and are now back with vengeance to take the Birmingham music scene by storm. Having heard their EP and seen their video for the title track, it was clear that the time taken to concentrate on it had been fully worth it. This event signaled their time to shine, it was their night to show everyone they were back, their time to party after their hard work and we all knew about it as soon as they hit the stage.

As the band launched into their opening song, the heavy as it gets, ‘Wrecking Ball’, the white backdrop on the stage falls to reveal the bands signature, TMY, written in lights, as I said, it’s their party and we were all extremely thankful for the invitation. Instantly the almighty roar of Joseph’s vocals, the chugged out, blues thrashed guitar and the savage pounding of Robb’s drums, swamped the entire room. The result equating to a sound and rhythm that Jack White would have been proud to have nurtured, leaving the audience in awe of how 2 people and 2 instruments can make such a huge quake of impact. The explosive riffs of ‘Ring of Flies’ and the forceful, sheer power of ‘Neptune’ sent the crowd wild, with the promoter dancing on the bar, crowd members clambering on the stairs to get the best view in the packed out room and an audience member going in for the crowd surf, all this by only the third song. There is no denying that the EP is incredible, but the live performance of it was something of absolute garage rock beauty, indescribable talent and surpassed everyone’s expectations. It’s not everyday a band can take a pop song from the likes of ABBA, grind it to the bone, re-build it and make it their own with a completely different and much better energy than the original ever had.

Delving into the stripped-back, blues tones of heartache and memory, the duo played their third song from the EP, ‘The Lakes’, with its sincere, ripped from the heart vocal, the audience was silent, mesmerized and felt every piece of emotion that went into the lyrics. Although, going from this to the stomping beat and high-end, feedback filled riffs of ‘And the Rain Came Down’, the nostalgic melancholy did not last for long. Once again, the energy was raised another notch and the party continued into the encore of ‘The Hearse Song’, a rhythmical barrage of volatile intermittent guitar and drums that ensured the room contained more sweat than it did beer by the end of their set.

The Mighty Young duo gave a live performance that set the bar for every band that follows in their path. The crowd shouted for more and every woop and whistle directed towards them worked as a way of expressing the gratitude of being part of an amazing evening and a well deserved congratulations to a down to earth band that deserved it. With more gigs planned, it is evident that they are set to entice much larger audiences than the one in The Sunflower Lounge. They are a talented, adaptable, highly energetic and gifted duo and I would advise anyone not to miss the opportunity to see them live, trust me, you will not regret it.