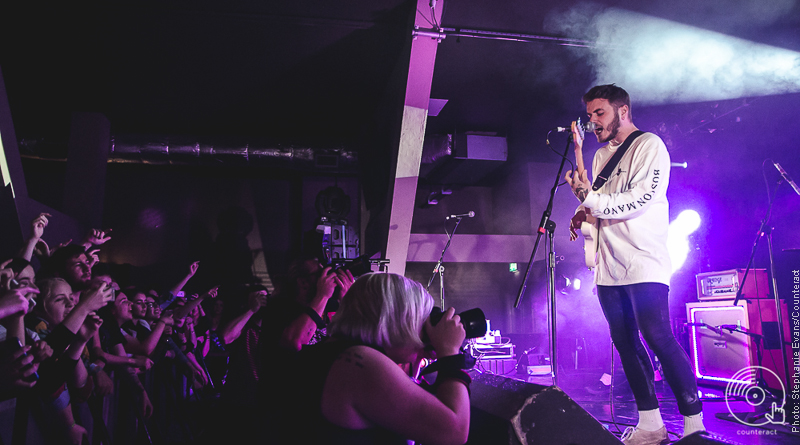 Packed full, the second room of the O2 Institute was more than ready for Aussie punk – rockers, Luca Brasi, to set the atmosphere for the night. Resembling the sound of a young Mallory Knox, this four piece were the perfect opening band for such a huge line up.

At certain parts of the set, the drums would overpower the rest of the band, making it difficult at times to follow the rhythm coming from each of the songs. This didn’t deter Luca Brasi, however, from building an atmosphere that would last throughout the whole night.

After playing Birmingham multiple times, Boston Manor have managed to create a good name for themselves in the scene. This showed when the crowd completely threw themselves into the music within the first few seconds of opening song ‘Laika’. The first circle pit of the night opened up when Henry Cox’s unclean vocals were debuted to the crowd. A downfall of Boston Manor’s heavier side is that Cox’s softer vocals seemed difficult for him to deliver, and came across quite flat. This didn’t seem to alter anyone’s opinion on their recent, debut album ‘Be Nothing’, though. Closing with the first single off their ‘Saudade’ EP, ‘Trapped Nerve’, Boston Manor definitely got the audience set up for headlining band Moose Blood.

Main support, Turnover, definitely changed the atmosphere of the room with their mellow tones. Mostly playing songs off their popular release ‘Peripheral Vision’, the band managed to send the room into a trance. With the majority of the room singing along to the cleverly written lyrics, it’s quite clear that Turnover’s fan base has increased since their sold out show in Birmingham last year. Around half way through the set, a selection of crowd surfers began to emerge, helping to add some energy to the room. A wall to wall sing along to ‘Cutting My Fingers Off’ nicely drew the set to a close.

A mixture of pink lighting and dry ice filled the stage, alerting the crowd that headliners Moose Blood were about to take their places on stage. Playing a selection of songs from both ‘I’ll Keep You In Mind From Time to Time’ and new album ‘Blush’, the band knew just how to please the crowd. Eddy Brewerton’s voice danced around the room, with each person there singing along with his every word. The emo-rockers moved around the stage creating a presence that was a delight to witness. Mid way through the set, the lights dimmed to a single spotlight on the lead singer as the opening chords to ‘Cherry’ kicked in. The atmosphere of the room changed abruptly, with phone torches swaying through the air until the personal song came to a close.

The pace picked back up again suddenly with more crowd favourites. There was nothing Moose Blood could have done to disappoint this sold out room full of fans. From start to finish the crowd overpowered the band with their chanting lyrics. As latest single ‘Knuckles’ came to a close the four piece from Canterbury said their final thank yous and left the stage knowing that they couldn’t have impressed Birmingham any more than they did.