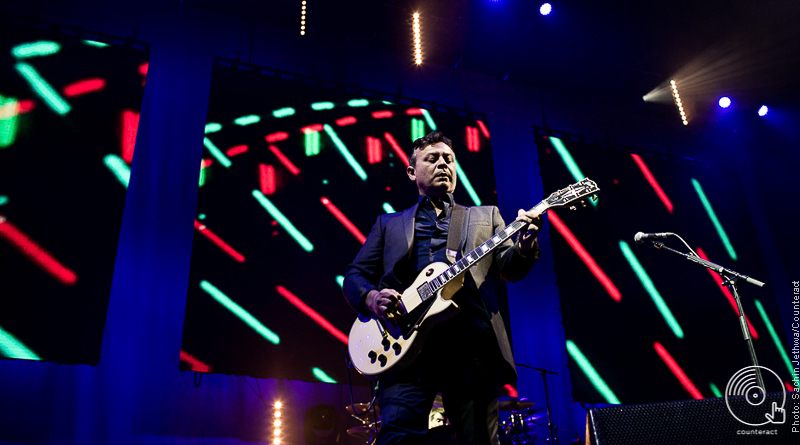 20 years on and The Manic Street Preachers prove that their triple platinum album, Everything Must Go is still a cultural touchstone for fans old and new. With support from Birmingham-band Editors, The Manics’ return to the second city was both exhilarating and poignant.

There’s no denying it, Editors are phenomenal when performing live. With nimble limbs, tormented looks and anthemic rhythms, this Midlands four-piece are mesmerising to watch when they hit the stage. Despite headlining tours in their own right, the band still managed to delight an enthusiastic Brummie crowd as a support act on Saturday night.

Opening up with ‘Sugar’, a track taken from the band’s third album The Weight Of Your Love, it’s clear to see what makes Editors special. Tom Smith’s impressive vocals remain haunting whilst his Ian Curtis-esque dancing makes him hypnotising to watch. Jerking across the stage, the band soon tear into ‘Munich’ which would be the only song they would play from their Mercury-nominated debut, The Back Room. From the opening chords, it’s an instant hit with the crowd who are soon chanting “you’ll speak when you’re spoken to” back to the four-piece band.

Editors create a similar reaction when they perform ‘Smokers Outside The Hospital Doors’, a song performed with such gusto that it creates a tremendous crescendo of tight guitars and drums. Whilst the older songs proved popular with Birmingham, it was the band’s closing track ‘Marching Orders’ from their latest album that really showcased their talent and diversity. With added synths that provide a more upbeat, dance-like feel than their previous material, the band performed with such energy that it was impossible to not get caught up in the moment. A thrilling finisher, this live set proved that Editors are still one of the best bands to come out of the 2005 indie-era and won’t be going anywhere soon.

Following on from Editors fantastic opener, it was clear from the electric atmosphere that the crowd were eagerly awaiting their headliners. As soon as James Dean Bradfield, Nicky Wire and Sean Moore walked onto the Genting Arena stage they are greeted to a tremendous cheer. It’s been 20 years since the band released ‘Everything Must Go’ and tonight, Manic Street Preachers fans were going to be treated to hearing the landmark album in full.

The setup was simple; the band were to play the 12-track masterpiece in its entirety, followed by a short break which would soon see the band back on stage to play other album’s hits. Originally released in 1996, Everything Must Go was The Manics’ first commercial success. A triple platinum album, it features four top ten singles and was a poignant record for the band, being that it was the first to be released after original member Richey Edwards went missing.

As soon as the band opened with ‘Elvis Impersonator: Blackpool Pier’, it’s clear that this 20th anniversary celebration is going to be special. Not once do the Manic’s falter; they perform as energetically and urgently as they would have in 1996 and do each track justice. When the Welsh-rockers kick into ‘A Design For Life’, the Birmingham crowd are sold. Those seating stand, those standing jump and soon the entire Genting Arena are screeching “we don’t talk about love”. It’s a stand out moment and the crowd pleasing song sets the tone for the rest of the evening.

As the Manics’ hurtle through their classic album – with highlights including ‘Kevin Carter’, ‘The Girl Who Wanted To Be God’ and ‘Australia’ – Bradfield vocals are so emotionally charged and heartfelt that it’s impossible not to be captivated. Likewise, Wire’s enthusiasm and wild stage jumping is infectious and the standing crowd can’t help but mimic his spirit.

After a short break, The Manic Street Preachers return to the stage to further delight the eager crowd with songs old and new. A touching moment came when the band played ‘Roses In The Hospital’ from their first album to a backdrop of images of missing member Edwards. It was moving scene that completely mesmerised the Brummie crowd. Finishing the set, the band played their most popular song to date – ‘If You Tolerate This Your Children Will Be Next’ – which saw the soaring guitar anthem get the crowd moving.

It may have been 20 years since The Manics’ released Everything Must Go but that doesn’t make it any less relevant. Timeless, enduring and classic, the band of three proved their place In British music royalty. Here’s to the next 20.