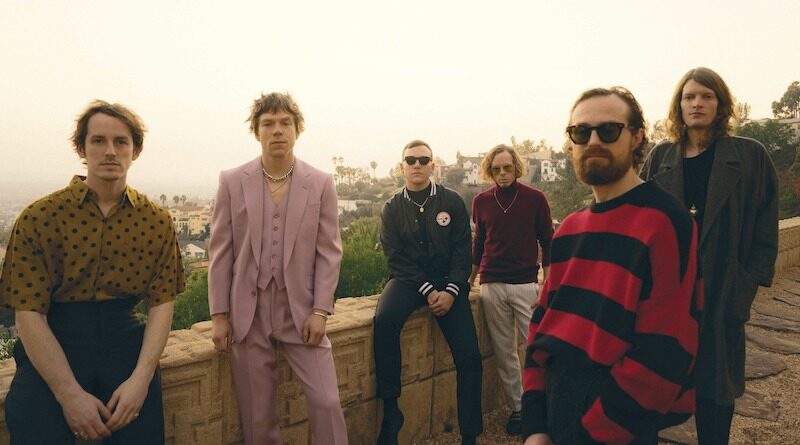 Alt-rock legends Cage the Elephant performed a killer set at the O2 Academy on February 20, with support from Post Animal and SWMRS.

Opening the night saw Post Animal take to the stage, a band who look like they’ve stepped right out of the film Almost Famous with an accompanying 70s rock-inspired (psych-tinged) sound to go with it. If that’s not enough nostalgia, a former member of the band is none other than Joe Keery, from the 80s inspired Stranger Things. The now-five-piece warmed up the stage with their neo-psych riffs and delay-drenched vocals. Self-titled track ‘Post Animal’ and ‘When I Get Home’ stood out amongst their fuzzy, ‘verb-laden set.

SWMRS followed with their punky, boy-band stylings – imagine if Sports Team ditched the chorus guitars and played punk, you’ve got SWMRS. Hailing from California with none other than the son of Green Day’s Billie Joe Armstrong on drums, SWMRS are undeniably a force to be reckoned with. They’ve got the attitude, the musicianship and songs about Miley Cyrus, what more could you want? Frontman, Cole Becker is reminiscent of a young Matt Schultz, making the band a perfect fit on the Cage the Elephant line-up.

Cage the Elephant barrelled on stage, full of energy, after a suspenseful wait. The haunting soundscape of the ‘Broken Boy’ intro filled the room, discordant sounds bouncing off the walls before landing into the jagged riff and distorted vocals. The crowd was captivated from the get-go, solidifying Cage the Elephant’s title as one of the “greatest rock and roll bands of our lifetime,” according to SWMRS’ own Cole. ‘Cry Baby’ and ‘Spiderhead’ followed swiftly, setting the bar very, very high for the rest of the show.

The ever-so powerful opening to ‘Too Late to Say Goodbye’ paved the way for an incredible middle-section of tracks that wove between their two latest albums, Social Cues and Tell Me I’m Pretty. This included the live debut of the disco-rock and ballad-inspired ‘Black Madonna’.

“I’m gonna need some help with this one,” declared frontman, Matt Schultz, before dropping into one of their most renowned hits, ‘Ain’t No Rest for the Wicked’. The country-western style guitar slides reverberated around the room as Schultz spat every last word with the crowd spitting back as if their life depended on it.

After ending the main show with the fuzz-heavy ‘Teeth’, Schultz returned to stage accompanied by Bockrath and pianist/guitarist, Matthan Minster for an acoustic and stripped rendition of the emotional and tear-jerking ‘Love’s the Only Way’. The remaining three joined the stage for the remainder of the encore as they swiftly transitioned into another classic ‘Cigarette Daydreams’.

The way the show was heading, anyone would have expected them to end the show with one of their latest singles ‘Goodbye’ and end on a solemn note. Not tonight. The band broke out into ‘Back Against the Wall’ off their acclaimed debut album before closing the night on a high with ‘Sabretooth Tiger’. Schultz commanded the crowd the entirety of the night with his performance as frontman, but there was almost a moment of symbiosis as they physically held him high above their heads before he fell into a crowd-surf. The adoring fans smothering him like a baptism or a ritual. A perfect end to a perfect show.