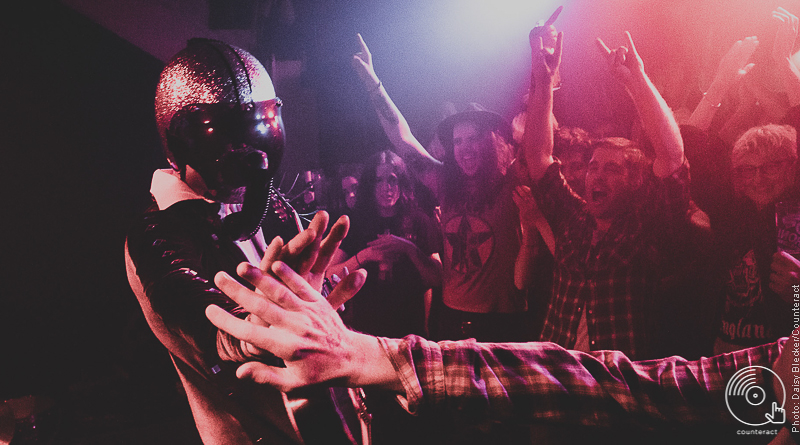 The opening bands are familiar faces at Killer Wave shows by now, but tonight everything seems renewed with a fresh intensity.

The Terror Watts‘ characteristic garage sound is raw, their energy unhinged, and their pop hooks more contagious than ever. A brief pause and it’s back into the heat of the moment. The crowd relishes in the blues infused punk of Black Mekon, whilst the masked musicians tear through a performance of enticing new material, crowd favourites, and scream-along anthems.

Exciting as all that proves, there’s only one real reason why everyone’s crammed into a bar basement on a Tuesday night.

For a one man band to incite so much chaos seems almost ridiculous, but for Bob Log III the fervor comes naturally. Taking to the stage in his iconic jumpsuit and crash helmet, the masked rock and roller whips up a frenzy in mere moments. Balloons bounce overhead, a particularly ardent fan steps upon the stage to sit on the musician’s knee – a staple of his sets for the familiar – and all manner of energy bounds throughout the room. Dirty, scuzzy, and infectious, his music harkens to the wild side of all who hear it.

All inhibitions are left by the doorway, a lot of logical coordination is lost amidst the movement on the floor. Drinking, dancing, and diving to the beat, it’s a party, and everyone’s thrilled just to have been invited. Amidst the antics and the uproar, the musician doesn’t miss a beat.

Exchanging songs for whiskeys, his playing is rarely flashy, but eternally forceful as he plays well into the night. Heckled back on stage for more, it’s a celebration that no one wants to see end. And sure, the hangovers the next day might be hell, but for a few short hours of fuzzed up heaven, there isn’t one who’d say it wasn’t worth it.