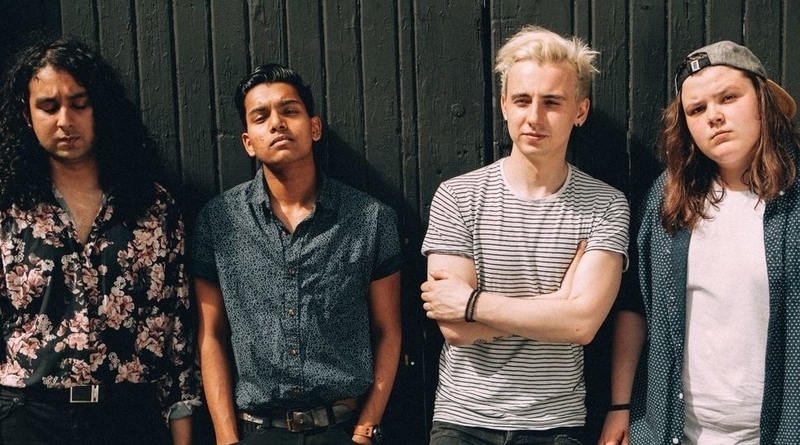 Alt-rock band Bloxx continued their biggest headline tour to date on October 29th at The Sunflower Lounge, with support from Lilleburn, Nth Cave, and stand-outs Vistas.

Brought to us by Sonic-Gun Concerts, on October 29th, tucked away in the iconic, underground room of The Sunflower Lounge – home to some of the coolest up-and-coming bands in the city – a lively evening of loud indie-rock ensued. If you’d come for a quiet evening of new music expecting to sway gently with a pint of beer in hand, the threateningly loud drum and bass and the heavy mosh-pits would have halted your plans and sent your beer flying, forcing you into an intense musical fight with complete strangers. Not, of course, that this is anything to complain about.

The roaring – and in some cases, deafening – sound of first support Lilleburn snapped the audience into action. Although they had an undeniably good stage presence, and the sort of music that you could potentially enjoy at a few decibels quieter, the over-bearing drum beats and inability to hear any of the lyrics left for a confusing performance of not-quite-rock and not-quite-indie. The thing is, their general sound wasn’t bad at all – in fact, their single ‘Boys/Girls/Hearts’ shows a great deal of potential, and it’s clear from the pair’s musical talent that they are natural born performers. Lilleburn could perhaps just benefit from a little more attention to their sound mixing.

Worcestershire-born, female-fronted Nth Cave had a more mellow take on the evening’s sound, with the lead-singer channeling her outer John Lennon, sporting a delightful pair of round, pink sunglasses. They looked the part, and they sounded it, too.

It was Vistas, however, that were the spark that lit the fuse that saw the audience explode in a passionate, and somewhat violent, mosh pit. Clutching onto our drinks for dear-life, it would have been easy to confuse Vistas for the headline act, watching the way in which the audience cheered ferociously as they came on stage and roared back the lyrics to the majority of their songs. It quickly made sense why.

And if their Scottish charm wasn’t enough to win us over, their new single ‘Headspace’ certainly was. With catchy guitar-riffs, and a sort of bluesy-twist on classic indie-rock, this song proved that Vistas were headed in the right direction. If nothing else can be taken from this evening: Vistas are definitely ones to watch.

As the night drew on and 10pm approached, it appeared that some of the audience had forgotten that the main event of the evening was still to come. Vistas were a tough act to follow – but Bloxx certainly proved themselves worthy. Opening with their popular song ‘Curtains’, Bloxx looked comfortable on stage right from the off. They were greeted by a pleasant amount of enthusiasm from the crowd which only lifted as they whipped out the favourites – including ‘Second Opinion’ and new song ‘Lay Down’.

Each band member showed a particularly charming sense of charisma, especially lead-singer Ophelia, whose occasional quips (“If you do know the words, remind me because I might forget”) brought a sense of warmth and calm to a violent, powerful evening. Bloxx have made their name as an alternative take on classic indie, with heavy guitar and catchy choruses that blend uniquely with toe-tapping, head-bopping and hip-swinging rock. But they are lyrically underrated, relishing in their simplicity and ingenuity.

As well as trailing through their classics, Bloxx treated us to new single ‘Sea Blue’, out on the December 1st. These newbies proved that, whilst each new song doesn’t particularly try anything remarkably new, Bloxx consistently deliver. With their steady rise in popularity over the past year, it’s no wonder that Bloxx aren’t taking too many unprecedented risks prior to the release (or the promise) of an upcoming debut album. But Bloxx must ensure they remain fresh and unique in order to live up to their name, before they become “the band that had those good songs that one time.”

Of course, we hope that day never comes. What Bloxx proved on Monday night was that they know what people like to hear and they’re willing to go the extra mile to deliver it. Whether or not the audience were welcome onto stage during their closing song ‘You’, knocking lead guitarist from behind his microphone and dancing ferociously along, they did not complain. Indeed, it was a wild end to an even wilder evening.