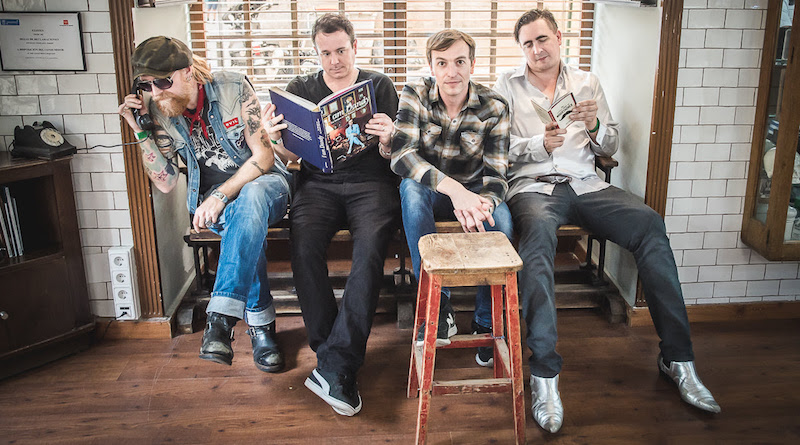 Art Brut – remember them? Eddie Argos and co. have announced their return with a new album and run of UK tour dates!

Modern art, makes me, want to rock out! Art Brut are back with their first new music in seven years and a huge UK tour to go with it.

Art Brut released the first snippet of new music over the summer in ‘Wham! Bang! Pow! Let’s Rock Out!’ – which has now also been revealed as the title of their forthcoming album.

Wham! Bang! Pow! Let’s Rock Out! will be Art Brut’s fifth studio record and was produced by award-winning folk musician Jim Moray. The album comes out on November 23 via Alcopop! Records.

Art Brut’s latest single is called ‘Hospital!’ and was written while frontman Eddie Argos was seriously ill in a German hospital: “I didn’t realise quite how ill I was at the time,” explains Argos, “I was in a German hospital und mein Deutsche is nicht sehr gut. I had a big operation, bigger than they were expecting when they started operating on me, and there were a few complications. They kept me in for nearly a month. It was the most undignified month of my life and although I was very grateful to the surgeons for saving my life and also to the nurses for taking care of me, I despised every fucking minute of time I spent there.

“The only thing that kept me sane was the mantra that eventually became this song. Every single lyric was written and repeated over and over again as I suffered numerous indignities. Songwriting is something I’ve always used to alleviate stress and on this occasion I really tested it to its limits. What I am most impressed by is that even when I’m at death’s door and pumped full of morphine, staggering around and collapsing all the time, I can still write a comical call-and-response backing vocal to amuse myself.

“I’m very glad not to be in hospital anymore—of course, as this was three years ago, I’ve broken all the promises I make to myself in this song.”

Art Brut will also embark on a UK tour through February and March 2019, which kicks off at Birmingham’s Hare & Hounds and concludes at Guildford’s iconic Boileroom. Tickets for all dates are on sale now.