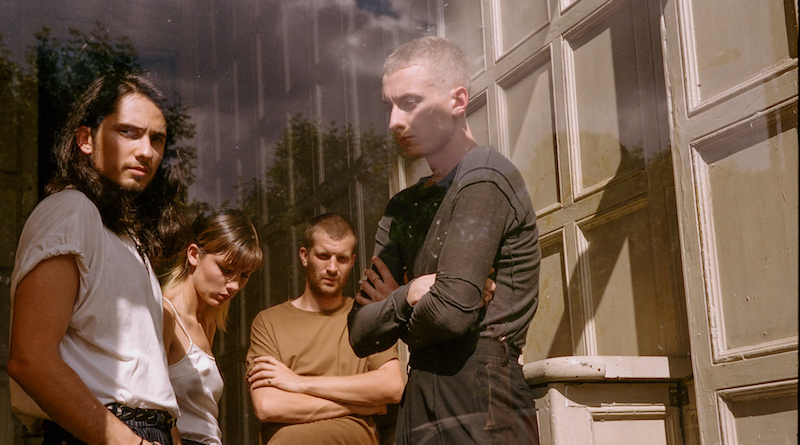 From the release of singalong track ‘Bros’ back in 2012 to the emergence of Visions of a Life in late September, Wolf Alice have established themselves as notable figures in the industry. In terms of maintaining their character despite success, drummer Joel Amey says, “The four of us haven’t changed as people – there’s no egos or anything weird.” In the wake of their second appearance on ‘Later… with Jools Holland’ alongside artists such as SZA and King Krule, Joel describes the experience as “enjoyable” although he does mention how he “was really nervous” the first time they were on the show.

And what about new music? “I fucking love that new King Krule album, and there’s this girl called Phoebe Bridges who came out with this new record Stranger in the Alps. I listened to the new St Vincent album as well, that was amazing.” When asked if there are any artists he listened to that fans would be surprised by, he ponders, “I don’t know what’s surprising to people anymore. I kind of listen to everything – I try to anyway.” “I think the mainstream pop thing might confuse people,” he says, citing Chance the Rapper’s Coloring Book as being amongst his favourites.

Despite Wolf Alice’s eclecticism, Joel says, “We never really listen to anyone else’s stuff and try and do that, if you know what I mean. We’re not the kind of band to nick other people’s stuff, we kind of have a lot of ideas in our heads… unless we were really stuck and needed to be pushed in the right direction. Justin had a lot of knowledge in that sense, and he put us on to a lot of stuff which was quite cool.”

“For stuff like ‘Yuk Foo’ there was a band called Atari Teenage Riot,” Joel explains, “and Ellie was playing the last Underworld record which we really enjoyed, and there’s some of that organic vibe throughout ‘Don’t Delete the Kisses’.”

On the subject of the process they underwent in the conception and production of their second album, Joel explains, “we’re not a jam band, we just don’t do that. We focus on different sections, we kind of work each section out, but it’s not always like someone would come with a fully fledged song and we’d be like “yeah – that’s banging!” For Visions of a Life obviously it’s quite long, and we had to keep playing and playing and working it out.”

“The songs I wrote we didn’t use in the end,” he laughs, “but I feel a real connection with ‘St. Purple & Green’ – putting the mellotron and stuff in it was like, where we wanted to be it was kind of like we knew the song was good but it never really showed itself. ”

In line with the robust nature of Visions of a Life, Wolf Alice aren’t a band to shy away from asserting their views; participation in politics and philanthropy through the supergroup Bands 4 Refugees, as well as Ellie Rowsell’s involvement in Labour’s election campaign, this June has been met with mixed responses. Joel simply describes the omnipresent Facebook opposition to not just sticking to the music as “bizarre”. “I don’t understand people who talk to us as if we’re like this commodity of music that isn’t allowed to have an outward opinion. Like we started the fucking band and if we have an opinion on the progression of the society we live in, then I think we’re entitled to share it.”

“And, also I wish I had more relatable people when I was growing up in politics that I could connect to,” he continues. “It’s all a big conversation and we shouldn’t be alienated because we do something creative”.

Within the creative sphere, Joel cites writing as another medium of his alongside drumming,”I think it’s important to, you know, exercise your brain”, he says.”I need to get back into writing every day, and stuff like that is something I used to do all the time. And it’s harder and harder to be able to.”

Despite being Londoners, Wolf Alice were a familiar face throughout the ‘b-town’ era’s peak of 2013-2014, and on the 16th of November they make another appearance at the O2 Academy; Joel describes the second city as “one of those more London-y places”. “I went up to Birmingham with my first ever band and we played at the Actress & Bishop,” he says. “I have many fond memories of Birmingham, we’ve played so many shows there and spent so much time in that fucking COW shop, and I’m really excited to go back there.”