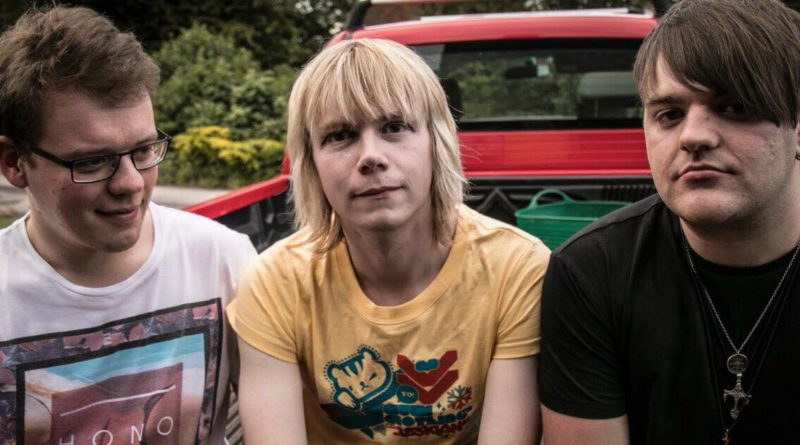 Birmingham band Quinn are one of many that have enjoyed a busy and successful 2017. The trio released their second EP, Crush, which received widespread acclaim. They also lost their original bassist, Meg Vedder, before recruiting Andy King to take over. Since then, the band – King, Sam Lambeth (vocals / guitar) and Samm Jones (drums) – have made some crazy videos and enjoyed some well-received gigs.

“There’s a short story by Kafka called ‘The Hunger Artist’. It’s a guy people forget about, but he’s always in the corner making things. We are that artist,” says Sam. “Sometimes we’re less present but we’re always chipping away, and 2017 has been no different. We’re constantly working.”

“I think we put on an awesome show,” says Andy. “We had a learning curve to get there, so it’s not always been consistent, but I think we’re hitting our stride.” Sam is also in agreement. “I think we’ve really embraced being a live band, and we try to create a spectacle,” he says. “We don’t just play and leave – we get the audience involved, there’s an exchange of energy.”

The band formed early last year, with Meg handing in her notice in April. “It came out the blue,” says Sam. “I still speak to her often and she’s very supportive. It was very amicable, but I was gutted when she left because I felt the brief bump in the road we’d had, we’d overcome.” For Andy, it was a quick thrust into the position. “Learning the songs was weird. I’m always looking to personalise the songs now,” he says. “It’s a balancing act, but I think it works.”

The band have garnered attention for their videos and their onstage get-ups. Sam says it’s deliberate. “We like to have fun and we don’t take ourselves too seriously, so the videos are an extension of that. A video of us being all moody would be so cringe,” he says. “As for my look, I just feel men are scared to look different. Most men all look the same! I’m not afraid to wear make-up and dress up and I think the audience gets that. Sometimes.”

This year, Quinn released Crush, which has gained airplay on BBC Radio 1, 6 Music and more. It has raised money for Mind and gotten great reviews. “I’m very happy with Crush. Ed, our producer, did a cracking job,” says Samm. “It’s different from our first EP, but I think we’ve definitely improved.” For Sam, it was more than just a record. “This is the first record where I’ve lived it,” he says. “I invested a lot into the songwriting and into recording it. The guys equally put in, too, and that really paid off. It’s the best EP I’ve ever made and what’s even better is so many people have invested in its warm nostalgia.”

Both Andy and Samm choose the group’s EP launch gig as their favourite of 2017, and are both excited for the future. “Literally anything could happen,” said Samm. “I assume it’ll be as fun as it has been so far.” Sam agrees. “I worry sometimes that there isn’t a place for us, and that no one’s really interested,” he sighs. “But then I remember how much fun we have. Quinn is my identity.”