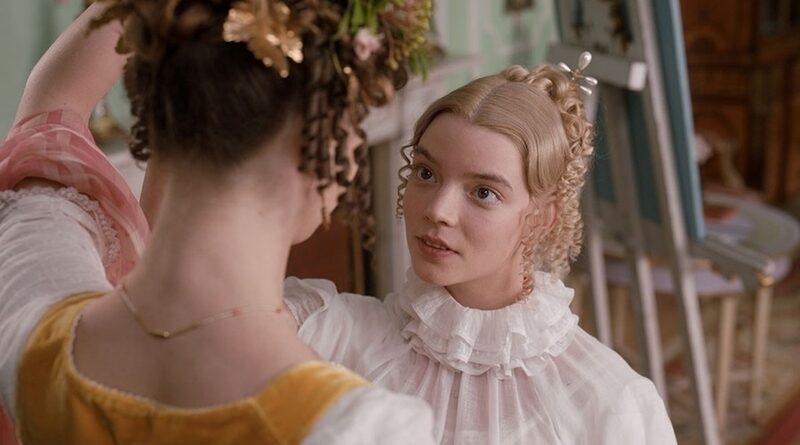 Evidently, every generation must have its own raft of Jane Austen adaptations. As a novelist, she is beloved—albeit particularly by one sex over the other—proffering tales of romance and social commentary concerning the late-18th Century landed gentry.

For modern audiences, her prominent big and small screen adaptations cultivate her prevalence. Indeed, other major works have seemingly achieved definitive iterations. Pride and Prejudice has Colin Firth’s Darcy-in-the-fountain moment in the 1995 TV version, while Sense and Sensibility belongs to Emma Thompson’s film of the same year, deliciously rounded out by Kate Winslet, Alan Rickman and Hugh Grant.

Emma, by contrast, doesn’t belong to any one adaptation—not for want of trying. Amid 1995’s Austen-mania, the Beverley Hills high school-translation Clueless perhaps came closest. Since, Emma has been played by Gwyneth Paltrow, Kate Beckinsale and Romola Garai, among more—though none have constituted winning adaptations.

Step forward the latest contender, directed by Autumn de Wilde, a prominent rock photographer and music video maestro (see Florence + the Machine, The Raconteurs, Beck). Austen’s text comes adapted by Eleanor Catton, who in 2013 won the Man Booker prize for her novel The Luminaries. While esteemed, both are conspicuous since Emma constitutes their film debuts.

You wouldn’t know it. This version makes a gallant attempt at retaining Austen’s charm and narrative while spinning a gentle contemporary concern throughout. It is both a direct and (as it were) straight telling of the story, revelling in period detail in design and text, delivered in a consistently modern way without going as far as colour or gender-blind casting, recently brilliantly demonstrated in The Personal History of David Copperfield.

As with Austen’s work generally, the subject matter is buttercream-light. Everyone is preposterously wealthy and comfortable—even the supposed poor have lovely frocks and houses. Nobody ever seems to have any work to do, save dutiful butlers and carriage-men. Thus, days and seasons are spent applying layers upon layers of fanciful costumes, touring country homes and planning balls. 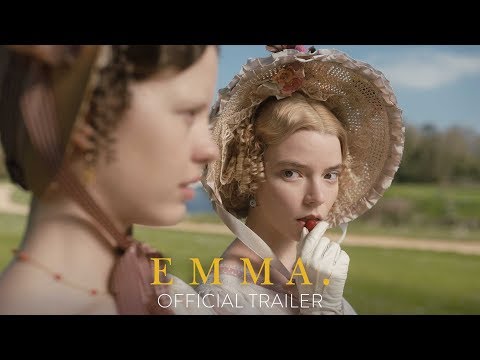 Within this world, Emma fancies herself a matchmaker. In this context, it seems quite reasonable that this would be a viable pastime for an insanely wealthy heiress – however you do wonder, given the lack of other pursuits/responsibilities, what people actually do once they marry, other than wait to die (presumably quite young).

Everything is trifling to a high degree, and quite lovely for it. It is blissful relief from the modern world to immerse yourself in a society that revolves entirely around agonisingly slow and misguided flirtations. The wisp of narrative concerns Emma’s plotting to have her apprentice-protégé Harriet Smith paired off with ludicrous and fairly creepy vicar Mr. Elton, while verbally sparring with initially platonic pal Mr. Knightley and daydreaming of her own prospective romance with Mr. Churchill.

Credit to the cast for making this come alive. I initially feared a BBC-teatime feel to whole affair, given then cast of familiar faces, including Bill Nighy and Miranda Hart. However, Nighy is always a sheer delight, the Nighy-er the better, and Miranda effectively propels a small grievance into a major emotional turning point.

The titular character is played by Anya Taylor-Joy, recognisable for turns in Peaky Blinders, The VVitch, Thoroughbreds and Split/Glass. Her saucer-like anime eyes capture Emma’s watchful but youthful gaze, believing herself an all-seeing string-puller while completely missing the mark for almost everybody.

Most rewarding is Johnny Flynn as Knightley, a modern renaissance man who also appears on the soundtrack. Flynn’s massive sideburns offset a perceptive wit and an inevitable romantic spark, lit predictably but engrossingly in a dance. In such scenes we are invited to enjoy the frivolities of days past while shining light on our own bizarre social rituals.

Now, we don’t dance (not in the same regimented way) to find love, we use apps. We do not sit for portraits, though we readily snap away on our phones. Ultimately, we are consumed with the same relationships, only now ours feels more blurred, grubby and hurried, given the demands made upon us. Against the modern world, Emma is a breath of recognisable relief.

Emma is on wide release, with showings at The Electric from March 3rd. Though, if you’re looking for period drama, you might want to try this one…