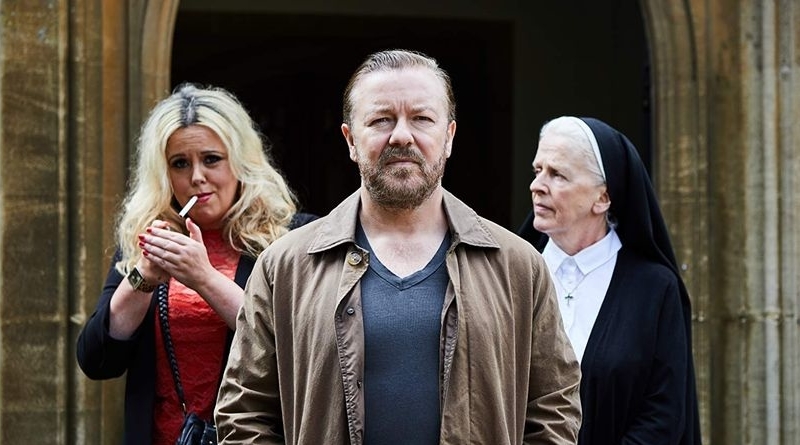 It is commendable that Ricky Gervais is even still producing work. After all, as he heads towards pension age, he doesn’t exactly have much to prove. Yet here he is again, taking his scintillating style of humour and gently pushing it somewhere new. In After Life, he plays Tony, a hitherto happy-go-lucky features editor felled by the untimely death of his adored wife, causing an outpouring of grief and an even bigger discharge of disharmony. The result is Gervais’ most satisfying work for a number of years.

Such rich subject matter is perfect fodder for Gervais. His style has always favoured the right side of melodrama, an established chain that takes influence from the shattering serious moments of The Simpsons and Futurama, along with the glum me-against-the-world grittiness of Larry David and Jerry Seinfeld. In After Life, Tiny has the down-at-heel and crushing cynicism of Extras‘ Andy Millman, mixed with the beleaguered buffoon that is David Brent. But Tony is certainly his own man, and After Life stands on its own.

Make no mistake, After Life makes for uncomfortable viewing at times. Like another great book-cum-movie focused around suicide, About A Boy, the moments of trauma are written brutally and frankly. Tony’s battles with suicide are dealt with bravely, his feelings of emptiness and worthlessness manifested in shaking rage and resentment.

However, it’s those juxtaposed moments of joy that really resonate – the home footage of Tony and his late wife bouncing around in carefree fashion provides the audience with some much-needed sympathy for Tony’s misanthropic ways. In episode one, a tedious article hunt turns into a genuinely touching moment when an interviewee – who has been sent five of the same birthday card – reveals his wife passed away. “Happy birthday,” Tony eventually says sincerely, and such a simple and brief response says a million things.

There are moments when After Life can be overbearing, of course. Those hoping for the hilarity of The Office or the light relief in Extras may find it come only in chinks rather than chunks. Tony’s vitriol can also misfire; his love of the word ‘cunt’ often means the word loses its shock value. Thirdly, the idyllic work setting – a free newspaper that employs nearly ten full-time staff – feels painfully out-of-place in today’s Twitter-addled culture. But all in all, After Life is a searing and satisfying portrayal of grief, delivered with plenty of heart.

After Life is available to stream on Netflix now. You can sign up for Netflix here.