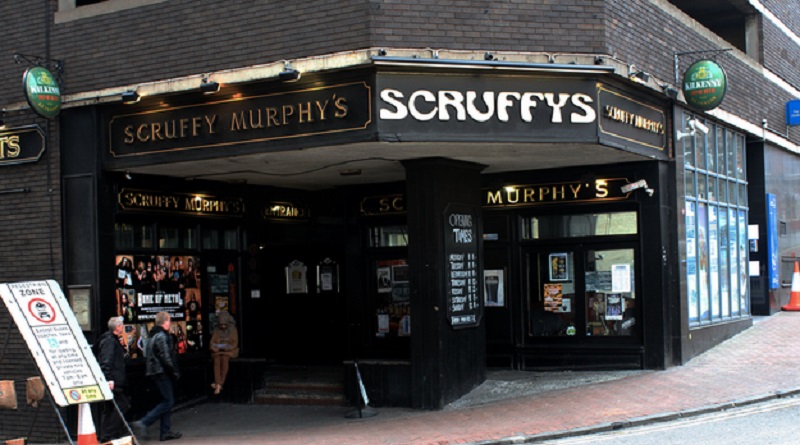 The venue specialises in rock, punk, goth, hardcore and associated genres and is a mecca for rock fans throughout the Midlands. With regular visits from the members of Napalm Death, Benediction, GBH and Anaal Nathrakh, it’s clear this is a favourite among bands. Live shows range from unknown local acts to new and establish rock acts from all over the world.

The venue is well known for having a cheap drink selection mainly beers, ales, ciders and spirits. It’s situated right by the central shopping area and is easily accessible by bus, car or taxi.

Find out what’s coming up at the Scruffy Murphys here.

Getting to Scruffy Murphys

Scruffy Murphy’s is situated on the corner of Dale End and Newton Street, equidistant from the old Carling Academy and The Crown pub. The venue is is right in the middle of Birmingham City Centre, and though reachable by car, traffic and navigation could become problematic during peak hours due to the one way system and public transport only zones.

There is a NCP car park directly above Scruffy Murphy’s which is accessible via Dalton Street. Also nearby is NCP Birmingham High Street car park, which is opposite the old Carling Academy on Dale End and just a couple of minute’s walk away from Scruffy Murphy’s. Parking costs £1.00 per hour. Alternatively, free street parking can be found around a 10 minute walk away just off Digbeth High Street.

Scruffy Murphy’s is within a five minute walk of Moor Street station and a ten minute walk of New Street station. A number of bus routes also pass around the corner from the venue and on the above Priory Queensway overpass. For more information on public transport in the West Midlands, please visit networkwestmidlands.com.