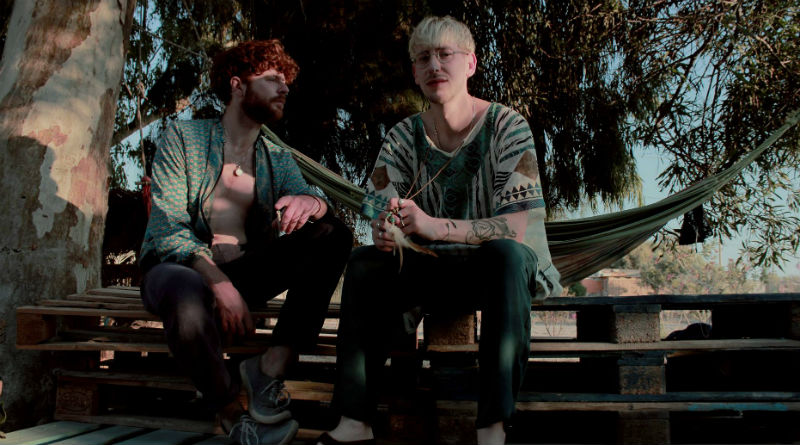 With chunky, powerful guitar similar to what infiltrated 80s new wave, Liquid Cheeks amble down a more fiery path than their preceding singles. ‘Fite’ takes on a whim of its own with perfectly erratic riffs, still all sprinkled with that iridescent Liquid Cheeks flair.

1/2 of Liquid Cheeks, Ben Ollis Gibbs (synth, vocals) described how ‘Fite’ was born out of a loop made entirely from “messing around.” He added: “We built the loop and was just dancing in the kitchen to it, we just went with it from there until something resembled a song. It’s quite different from the other two songs and it could split people in terms of enjoyment. We don’t really know the meaning of the song, there’s just a lot of anger in there we want to express.”

That anger is expelled Street Fighter style in Liquid Cheeks’ new video, as Ben Ollis Gibbs and Gregory Byron Clarke (guitar, lead vocals) hash it out in black and white on an industrial street. The video is self aware and cynical, subtitles add to the slapstick whilst breaking the fourth wall as the band members go from fake fighting to seemingly real bickering over the video. Two polarising characters who, whether they like it or not, come together to make the music work.

The frank and cynical outlook is something that is normally avoided, or at least shrouded by the glittering synth Liquid Cheeks’ fans know and love. ‘He’s a Flower’ takes the glam of the 80’s and throws it in a blender with lo-fi synth and modern harmonises, whilst ‘Serendipity’ is a dreamy pop ballad that twinkles in the glow of the fire it narrates.

This isn’t to say that ‘Fite’ does not fit into Liquid Cheeks’ calibre. The duo have honed their retro sound and the fact they can keep morphing it around more than lovely, serendipitous metaphors is something to be admired. ‘Fite’ is a step in the right direction for this up and coming duo, showing that there’s more to them than meets the eye.