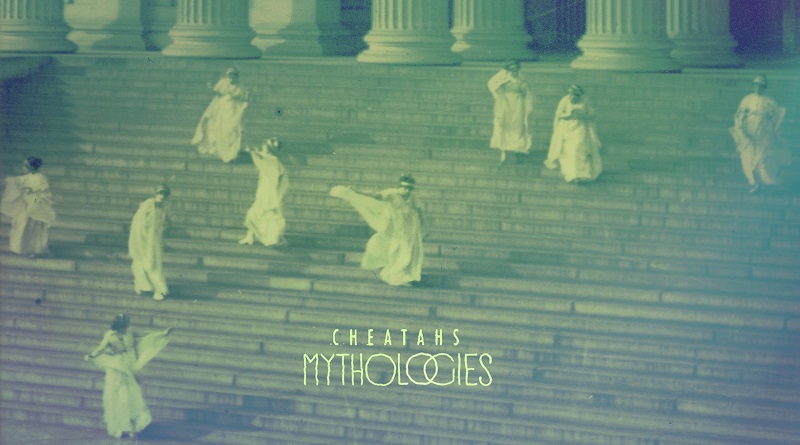 Perhaps it’s no coincidence that Cheatah’s Mythologies shares its name with a book by French philosopher Roland Barthes. Like Barthes, Cheatahs seem to be interested in the notion of binary (defining something by its opposite).

‘Red Lakes (Sternstunden)’ combines bright jangly tones with fuzz to create a hazy opener to the album. As befits its name, ‘Channel View’ has moments of calm followed by torrents of activity: balancing laidback verses with insistent choruses driven by relentless percussion. ‘In Flux’ seizes the ear, multi-tracking Nathan Hewitt’s voice with a gruffer, bass tone to create a disquietening simultaneity. Similarly ‘Hey, Sen’ and ‘Deli Rome’ incorporate reverberating microphone effects, which juxtapose with the most clear vocal tones on the album. The steady pace of ‘Freak Waves is broken up by halting pauses, whilst the guitar-led arrangements are placed in startling relief by dominant keyboard interjections in ‘Signs To Lorelei’. ‘Deli Rome’ creates a warped alternative to its steady verses by using a reversed percussion track alongside see-sawing guitars.

There are moments of synchronicity in Cheatah’s album of contrasting pairs. The dizzying miasma of ‘Colorado’ eventually strips back to its component parts. These ripples, beeps, and squeals segue into ‘Su-pra’ and are developed into tangling ribbons of sound that finally merge into the wonderfully wiry guitars and joyful harmonies of ‘Seven Sisters’.

The bilingual ‘紫 (Murasaki)’ hurries the album towards bright indie pop with its Japanese twist, then ‘Mysteci’ brings it back to ballad pace with vocal harmonies dancing over a melange of sinewy guitars. ‘Reverie Bravo’ closes Mythologies in grand style with fugal layers of opposing voices.

Cheatahs’ music is often compared to 90s rock and shoegaze: if you like those genres you’ll probably like this. But Mythologies is no mere simulacrum of the past; its juxtaposition of opposing elements is a sophisticated response to the confusing multiplicity of signs in our ever-changing world. I think Barthes would approve.

Mythologies is released on October 30th via Wichita Recordings.