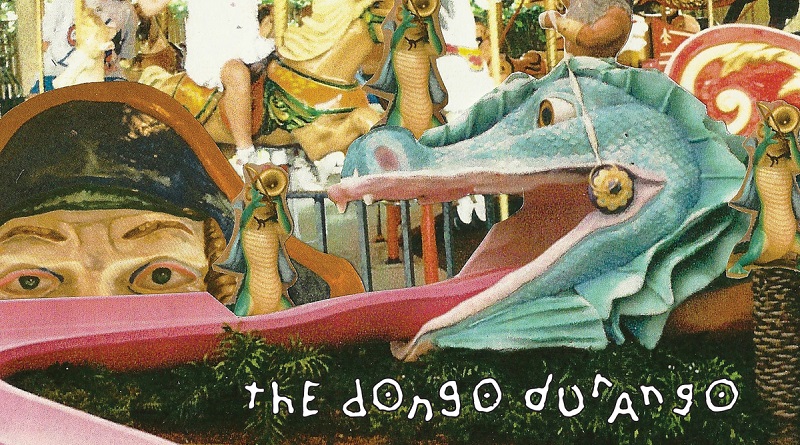 Baltimore’s Sun Club live up to the jollity of their name on their debut album, The Dongo Durango. But despite the album’s youthful energy, there are hints throughout that happiness is not always what it seems.

‘Glob’ initially unsettles the ear with coughing and laughing layered over carousel chimes and children’s laughter; it segues into the pleasant ‘Summer Feet’, which has exuberant yelping vocals and snappy percussion. ‘Worm City’ builds the sense of urgency with crashing drums, wailing guitars and shouted lyrics whilst the halting rhythms of ‘Carnival Dough’ and ‘Language Juice’ grab the attention.

The pretty melody of ‘Beauty Meat’ builds into an anthemic singalong to create a moment of pure joy, but then the title track comes along to disquiet the listener with banjo strumming accompanying the creepy insistence that “I want you to see me in the flesh”. Warped laughter concludes this intermission to remind us that one person’s happiness can be another’s cruelty. ‘Cheeba Swiftkick’ cleanses the palate with its jangling strings and exuberant cymbals; and the hi hats and bouncy hooks of ‘Puppy Gumgum’ are a delight. ‘Dress Like Mothers’ is sentiment-led indiepop, built on a yearning for those missed. Its final chimes echo out to suggest the passage of time, whilst sliding guitar strings evoke the sensation of being brought back to the present moment at top speed. ‘Tropicoller Lease’ brings the album to a close with energetic hollers and surprising tempo changes. Everyone joins in to create a sense of contented solidarity but even here there are some warped samples to ensure that things don’t end on a completely carefree note.

The Dongo Durango’s cover art places a clown’s head on the body of a child who is riding a carousel; to one side of the carousel a smile dances over a crocodile’s jaws as it extends its tongue to catch prey. It’s an apt image to represent an album full of joyful outbursts disrupted by occasional hints of menace.

The Dongo Durango is released on October 30th via ATO Records.