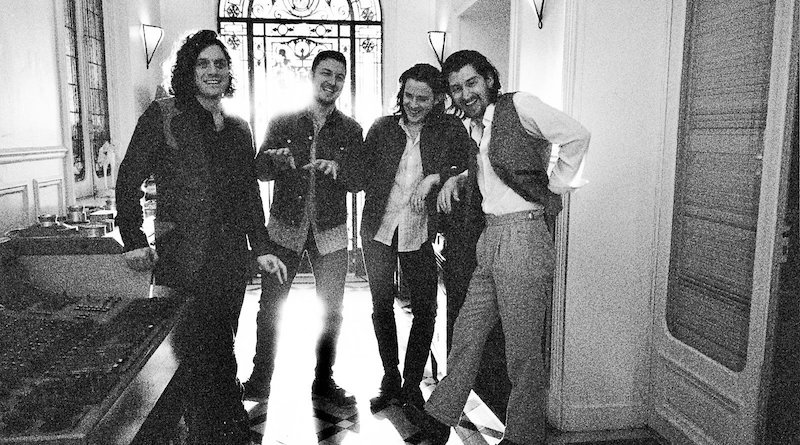 “I just wanted to be one of The Strokes,” proclaims Alex Turner, on ‘Star Treatment’ – the opening track on Tranquility Base Hotel & Casino.

An Alex Turner solo album this is not – though it feels like it throughout – but another reinvention of a band who shot to fame following tales of jumping taxis and swapping jumpers to try and fool nightclub bouncers in a past High Green life.

The truth is, TBH&C is probably not going to sit well with linear Arctic Monkeys fans. Turner – heavily influenced by his father – has now swapped guitar for a piano, and while there may be subtle guitar scattered around the Sheffield band’s sixth studio serving, this release needs your full attention from start to finish.

Highly americanised but probably not in the way you’d expect, tracks like ‘One Point Perspective’ and ‘American Sports’ tell almost self-indulgent reports of regret and hallucination to 50s-style instrumentals, rather than the innocent social commentary and colloquialisms that we all became accustomed to back in 2005.

Our new album Tranquility Base Hotel & Casino will be released on May 11th 2018. Produced by James Ford and Alex Turner, it was recorded in Los Angeles, Paris and London. Pre-order via link in bio.

It would be unfair to coherently compare their latest release to their earlier material though as Turner and co. are clearly quite persistent in their attempts to distance themselves from that; perhaps so much so that they didn’t even release a lead single in the run up to the release. Your full attention please.

The album’s self-titled track croons and twists, with “technological advances really bloody get me in the mood,” and “kiss me under the moon’s side boob” still showing Turner’s brazen slang is still around. This theme continues on the Last Shadow Puppets-esque ‘Four Out of Five’, the cheeky “hokey cokey with the opposite sex” showing his playful side is still there too. It’s quite rare that an album doesn’t have a clear lead single, but if there is one, ‘Four Out of Five’ probably is that.

Self-reflection tends to be a prominent theme on TBH&C, as Turner tells us he’s “so full of shite, I need to spend less time stood around in bars waffling on to strangers all about martial arts” on ‘She Looks Like Fun’; a track which effortlessly changes its retro tempo from swift to sedate.

Technology and space stands out throughout this album that, in truth, is so in the stratosphere it’s almost Bowie-like. The twirling tune of ‘Batphone’ backs a tale of search engines and being “sucked in by smartphones”; you can’t tell me this band are no longer relevant. However, if you’re looking for Turner’s most reflective track, you can look no further than album closer ‘The Ultracheese’; a narrative ballad that seems to mock his his own US persona and questionable decisions.

It might not be what everybody expected after a five year wait, but Arctic Monkeys have earned their right to release whatever kind of album they like.

Tranquility Base Hotel & Casino is full of crooning, reflection and vivid imagination, and once the constellations connect, Turner’s most intricate piece of work will shine bright in the night sky.