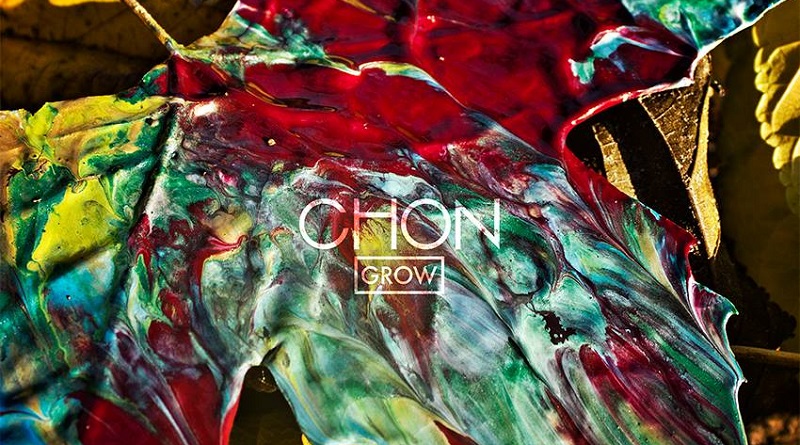 On the back of three albums in two years, Chon have found themselves nestled into a curiously underpopulated pocket of instrumental prog-rock that you can relax to. Though not particularly big names yet, their debut full-length album, Grow, makes great inroads to rectify such injustice. 12 tracks clocking in at a deceptively paltry 35 minutes may discourage some, but it’s worth noting that this is from a band that think very little of suspensive introductions – what the album offers instead is an unperturbed and persistently tight medley of poetic guitar noodling.

That is not to say Chon chug along obstinately with the raw, earthy power of Animals as Leaders, a band they have supported on tour. Grow instead emits an overarching sense of polished calmness, one that lays a solid foundation for an album speckled with brief moments of mischievous, virtuosic bedlam.

A very brief and airy introductory track is punctured by an immediate cutting guitar solo in the opening moments of ‘Story’, before all instruments fall into a synchronised rhythm. The two guitars swap periodically between unison and polythymic riffing, something that is impressively replicated by the drums later on. These moments are peppered throughout the album and appear sporadic in nature, when in reality they’re incredibly well calculated and stand as a testament to Chon’s amazing compositional capacity.

Following track ‘Fall’ exhibits much of the same, with a searching chordal structure and tonal modulation that adheres to a more progressive jazz context, the kind peddled by bands such as Phronesis. This, ‘Book’ and ‘Splash’ display a distinct melodic prowess that is hammered home with constant repetition, underpinned by Nathan Camarena’s unfathomable dexterity on the drums.

Drew Pelisek comes into his own in ‘Can’t Wait’ and ‘Echo’, both of which employ his vocals with such grounding assurance that it’s a wonder why only one sixth of the album features them. These tracks, along with ‘Suda’ and ‘But’, are reminiscent of Scale the Summit and Vasudeva during their most contemplative passages. ‘Knot’ and ‘Perfect Pillow’ offer the exact opposite, a distortion-laden procession, reminiscent of those bands in full flow.

Most tracks in Grow follow a similar pattern and personal preference eventuates as the tune that sticks most potently in your head. But from an album that offers a plethora under the direction of a truly competent band, they’re likely to stick for a while.