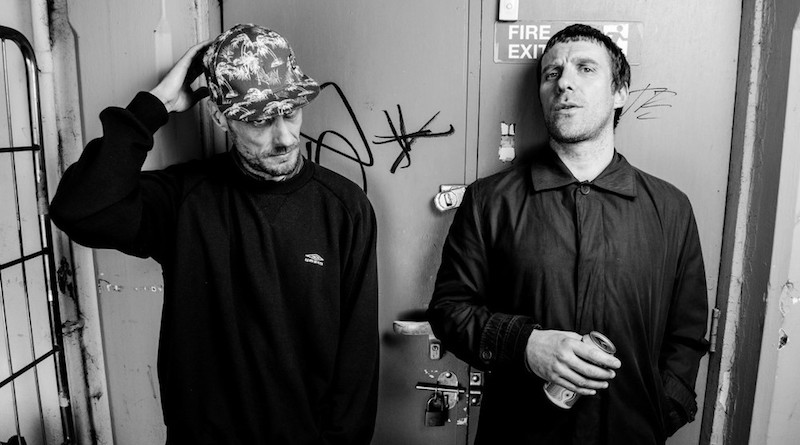 John Lydon once said “Anger is an energy” and tonight, Sleaford Mods bought back the spirit of 77 to Birmingham in full force. The laptop punks produced a short set full of rip-roaring beats and tales of realism that left the O2 Institute breathless.

First support act Ceramic Hobs entered the stage. Possibly middle aged and looking like a serving of dad rock was imminent, a surprise was then produced. Heavy riffs with screaming vocals and added intensity from keyboard sounds taken from the new rave era. Even the old finger of fudge advert from the 80’s got blasted out at one point.

Second support act Nachthexen are a perfect fit to support Sleaford Mods. A keyboard providing the driving sound of the band and with angry despairing vocals to back this up, the sound is complete. Like a cross between LCD Soundsystem and The Fall with a female edge, the band ripped through their support set. Their new single ‘Disco Creep’ being the highlight of the set.

Sleaford Mods took to the stage with the tension building since Nachtexen left the stage. The laptop resting on milk crates is fired up and Andrew Fearn gets into his now familiar groove, beer bottle in hand. ‘I Feel So Wrong’ gets things started, followed by crowd favourite ‘Army Nights’, which launched the opening of the mosh-pit which remained for the entire set. Jason Williamson marched around the stage, his performance must take some serious energy. Ticking away and saying every word like he means it, he’s a seriously good front-man and an icon in today’s industry that seems to lack the characters of previous times.

The brilliant ‘TCR’ was a mid-set highlight. “That 50’s look can do one, Elvis has definitely left the fucking building”, Williamson then mentioned the fact they didn’t play Birmingham last year. “I don’t know why we didn’t bother coming…..We don’t say this every night but we’ve felt a connection”. Old favourite, ‘Jolly Fucker’ was also in the set, the crowd now in full mosh mode. The short set was ended with Birmingham in a frenzy.

Sleaford Mods came out and pulled three bazooka songs out of the bag for the encore. Anthem ‘Jobseeker’ started things off, followed by the brilliant ‘Tied Up In Nottz’ and ‘Tweet Tweet Tweet’ with its pounding bassline finishing things off nicely. Despite the name, if you see Sleaford Mods,  leave your parker and your scooter behind as this is pure punk for the real people.