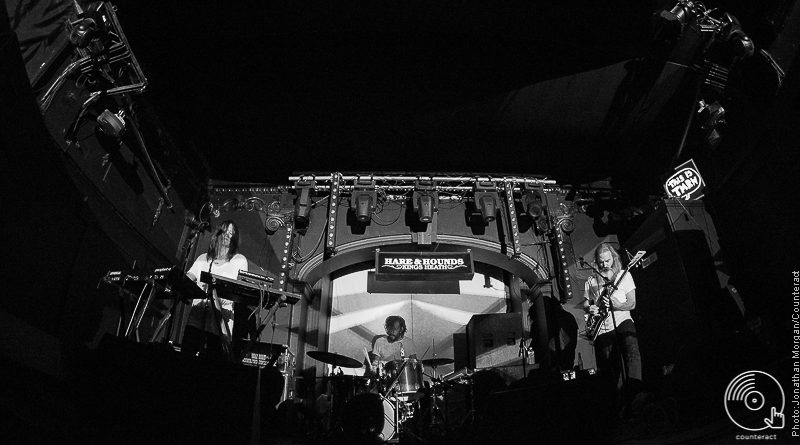 On Friday July 22nd local promoters, This Is Tmrw and Lunar Festival brought a stellar line-up of San Francisco’s Moon Duo, supported by Victories at Sea to The Hare and Hounds, Kings Heath. Sensateria DJ’s started the night off by playing an eclectic mix of tunes as the upstairs venue quickly filled to near capacity with a mixed age range crowd. The early curfew of 10pm ensured that the gig got off to a rapid start with the support act taking to the stage around 8pm. 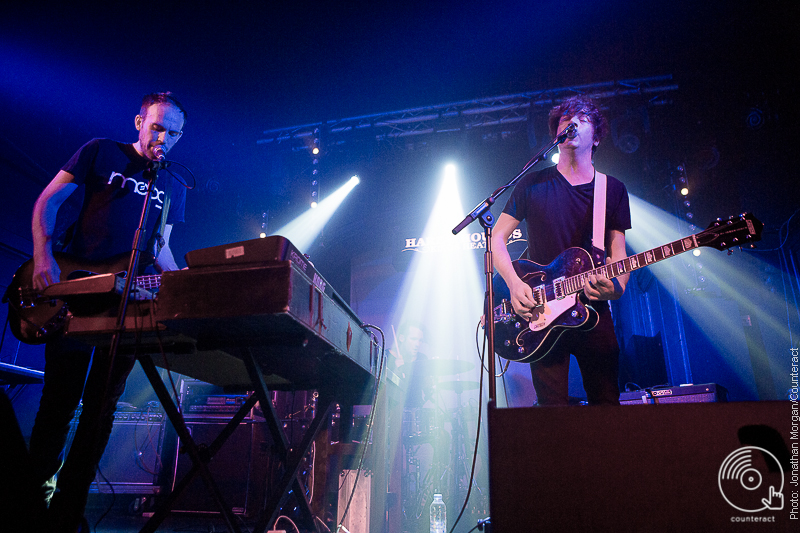 Birmingham based 3 piece, Victories at Sea, have developed a large and loyal following based on the success of their first full length album, Everything Forever, released in 2015 via Static Caravan Recordings. Their music blends a wide range of influences from the 80’s electronic post-punk style of New Order to 90’s shoe-gaze fuzz, and teases elements of eerie synth based drone, soaring pitch perfect vocal harmony, tight guitar riffs, pumping drum rhythm and enough optimistic and anthemic euphoria to get the audience grooving along.

Playing a 6 song set and ending on a currently unreleased new track, the band proved to be an instant hit with the Moon Duo audience and created an uplifting atmosphere with their catchy and highly original musical mixture. Songs such as the determined electronic layered medley of ‘Up’ and the dance floor enticing stomper, ‘Poles Apart’ were particularly well received, along with the echoing bass rumble, soaring desolate soundscapes and heartfelt lyrics of ‘Low’, proving that Victories at Sea are satisfyingly much heavier sounding live than they are on record. The band looked completely at ease on stage and gave a focused, honest and entrancing performance immersing every person in the room with their soundtrack to the calamity of chaos and the calm above the storm. 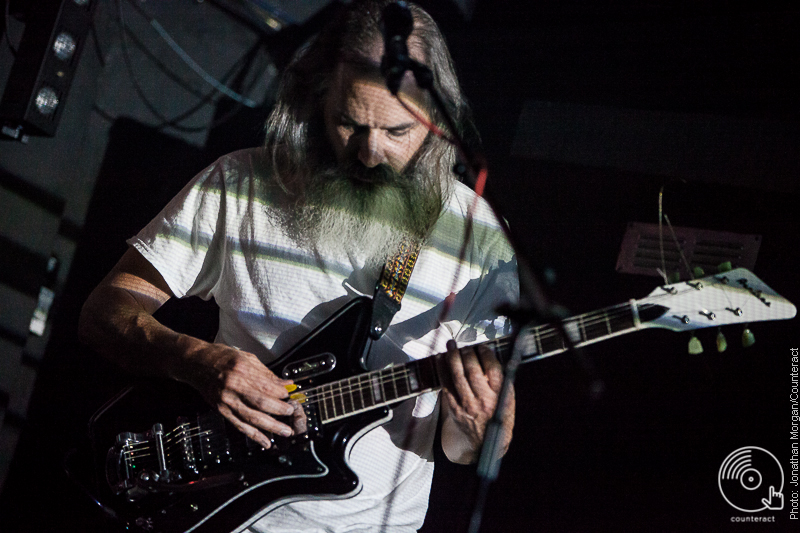 Moon Duo, although technically a trio when playing live with the addition of touring drummer John Jeffrey, took to the stage at 9pm. Hailing from San Francisco and later retreating to Colorado, the master of vintage psychedelic fuzz, Erik ‘Ripley’ Johnson along with partner, Sanae Yamada, made their entrance to a minimal lit stage against the background hum of distorted VHS cassette tape and static radio frequency, creating the scene for the musical mind warp that was about to be unleashed upon us. Although having only released two full length studio albums prior to their ‘Live in Ravenna’ recording, followed by their latest release, ‘Shadow of the Sun’, Moon Duo demonstrate that their performance is an experience for all the senses and work better as a live outfit away from the confines of a studio.

The 3 piece dived straight into their 9 song set full of the cyclical musical rhythm that they are best known for, with Ripley’s trademark indistinguishable whispering vocal blending through the haze of repetitive drum rhythm and trance like keyboards. The constant build up of sonic sound waves, along with minimalist guitar solos and a graphic light show replicating the rhythm of continuous forward journey along an infinite highway, made for a mesmerizing, time lapsing and hypnotic experience. It was obvious that Moon Duo had an effect on everyone in the room as nobody was standing still, everyone happily lost in their own groove by the second song. The metronomic sense of timing, futuristic hum and endless rhythm that the band maintained was impressive to say the least. At no point did the drummer put down his sticks, let alone miss a beat, and to be so precise for an hour non-stop is surely some sort of triumph. It is no wonder the studio drum machine is no longer needed when John Jeffrey can maintain the same continuous loop with such streamlined precision, and fortify their set to successfully reflect the 1841 Ralph Waldo Emerson essay ‘Circles’ and it’s conclusion of ‘nature repeating without end’, that initially inspired the music. 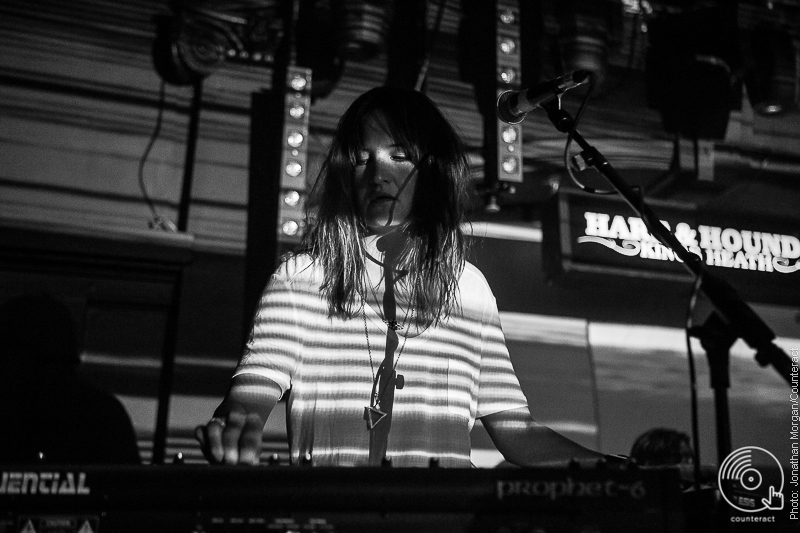 The band members looked completely relaxed whilst powering through their set and had very little interaction with each other, although this only reinforced the notion that the appreciation of Moon Duo’s music is an individualistic and personal experience that is easy to get entangled in. They included material such as the fast paced, ‘Wilding’, the stripped back spiraling of ‘In The Sun’, the reverberant rattlesnake shake of ‘Free Action’ echoing an influence of Ripley’s original masterpiece, Wooden Shjips, along with debuting new material. Each song continued into the next with the graphics matching the tone of each one perfectly, everything from TV static fuzz to the swirling vortex of falling into a psychedelic rabbit hole. Becoming mesmerized by Moon Duo’s entire performance was easy and I doubt that anyone in the audience would have complained if the band had continued to play till the sun came up, in keeping with their motto, ‘And so it goes. Rust never sleeps’. Inevitably reality kicked in far too soon and the hour long set was over far too quickly. As the band casually exited the stage the sweaty crowd left the venue in an obvious awestruck daze, although it was not hard to notice that the word leaving everyone’s lips was a well deserving and completely besotted, ‘wow!’