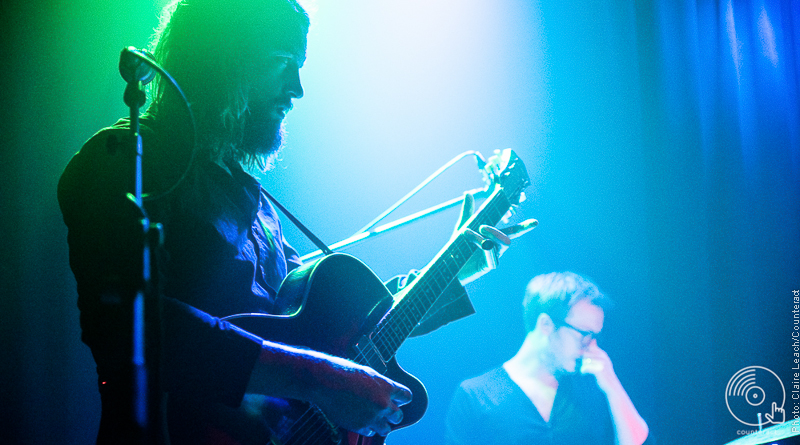 It is undeniable that in recent years Birmingham has cultured one of the best independent music scenes in the UK and those who attended the Hare and Hounds tonight got to experience three of the best examples that the city has to offer. The evening was a celebration of local musicianship and friendship with the heart and soul of a rock’n’roll community that is difficult for any other city to rival.

First to take to the stage were the intriguing and provocative 4 piece, The Hungry Ghosts. From the outset they made it clear that they are not a band that pander to the tastes of the light-hearted music fan, by ripping straight into an uncompromisingly intense and gritty set. Beginning with the punchy bass-line of ‘Beetle Boots’, The Hungry Ghosts quickly engulfed the room in their own brand of slaughterhouse garage blues and trash country, with front-man, Joe Joseph’s vocals of dark intent and fiendish howl grasping the attention of everyone in attendance. By the second song, ‘Father Snake Moan’, the opening track from their upcoming Setting Son Records release, Blood Red Songs, the quartet were in full force. The pounding swamp blues rhythm, husky back up vocals from bass player, Jodie Lawrence and the crazed raspy screech from Joe was made even more enthralling when he left the stage and began his vocal haunt barging amongst the crowd.

The band played a well chosen mixture of songs all with a delightfully dark undertone, such as, the echoing devilish repent and heavy rhythm of ‘Hummingbird’, the rough and raucous, lo-fi foot stomper, ‘Hares On The Mountain’ and, ‘Super King King’, from their new release. With the joint vocals and element of sexual tension showing a parallel to The Kills, Jamie Hince and Alison Mosshart, this song evidenced a band that are not only maturing musically but also utilising their male/female vocal partnership to its full extent. Ending their set on the song, ‘The Catcher’, and leaving guitar duties in the capable hands of Billy Ollis, Joe once again joined the crowd, projecting his vocals with the menacing stare of a possessed preacher vivaciously addressing his sinful congregation, much to the delight of the audience. Their performance not only evidenced their own insatiable appetite to captivate the crowd with their music and showmanship, but also succeeded in leaving the audience hungry to hear more. Hopefully, this six song set was only a mere taster of what is yet to come from this band and they are, without a doubt, a group of ghosts to keep an eye on.

Next to grace the stage were Birmingham’s Table Scraps, originally a 2 piece made up of front-man Scott Abbott and drummer Poppy Twist, they now have the added injection of a hefty bass rhythm provided by the third addition to the ensemble, Tim Mobbs. The experts in distortion and wild intensity supercharged through their 7 song set with a gratifyingly unfiltered and coarse rapture. Powering through songs such as, the dark imagery of, ‘Bad Feeling’ and the punk thrash of ‘Electricity’ from their 2015 release, More Time For Strangers, the drum skins were beaten within an inch of their life and Scott’s voice raised the rafters with a fired up grit of angst and savage frustration.

With the majority of songs being under 3 minutes long the set was short, sharp, pushed to its limits and completely addictive. Having grown in popularity in recent days, as evidenced with their track, ‘Dead Scene’, being used for the US TV show, Kingdom, it is pleasing to witness Table Scraps maintaining the same unrelenting dirty riffs, blistering drum beats and fuzzed up brutal distortion that they are best loved for. In keeping with the flavour of the evening, the sinister undertones continued throughout Table Scraps performance with a ‘love song’ thrown into the mix telling tales of dark obsession. Ending the set on, ‘Motorcycle (Straight To Hell)’, with its punchy, rolling rhythm and the lyric of “Devils blood for gasoline, prettiest thing I’ve ever seen”, made for a gut wrenching and monstrous conclusion to an already audacious performance. If you are going to make more time for anything, make more time for Table Scraps.

Following the short break the well settled-in crowd were more than ready to witness the performance that John J Presley was about to let loose upon us and the eagerness was clear when the mysterious man in the black suit took to the stage. Hailing from the West Midlands and accompanied by drummer, Daniel Maiden-Wood and Gris-De-Lin on keyboards, brass and guitar, the whisky soaked lyrics of the set opener, ‘The Fear’, pierced through the crowd from a voice containing the perfect measure of caustic baritone and tender, syrupy blues warmth, reflecting shadowy tales originating from a dirt track road somewhere in America’s deep south. The trademarks of a born blues-man are obvious, the black outfit, the mysterious shadowy stance and a musical style that blends the best parts of Nick Cave, Mark Lanegan and Tom Waits with the spirits of Son House and Robert Johnson, ultimately producing the modern day outcome of selling your soul at the crossroads. The influence of such blues legends is clear to be seen, although from watching his set it is apparent that John J Presley can maintain the ethics and standards of such legendary musicians whilst providing a contemporary and original interpretation.

Including songs such as, ‘All That’s Inbetween’, from the single, Honeybee, along with the pounding, decisive rhythm of ‘Left’, the trio not only delivered a set that is rooted in blues, but also one full of fuzzy guitar riffs, poetic lyrics and deeply sombre undertones of authentic vintage harmonium. Reportedly playing a brand new set from previous shows, they included the new single, ‘Dance With Me’, a seductively ferocious track embedded with all the necessary traits of distorted winding guitar and a twisting backbone of ambient keyboard and haunting percussion. With the whole set being 10 songs long and ending on the track, ‘Riders’, with the crowd shouting for more, the 3 piece certainly made a lasting impression with their honest and earthly tales of love and loss, portrayed perfectly through their heavy and distorted, dark delta blues.

To find a band that can take the elements traditional blues and transform it into a new genre whilst not losing any part of the feeling that makes it authentic and extraordinary is a complete rarity and a talent to hold onto with both hands. It therefore, goes without saying that there is a new blues legend in the making and if there is one Presley worth listening to nowadays it sure as hell isn’t Elvis.