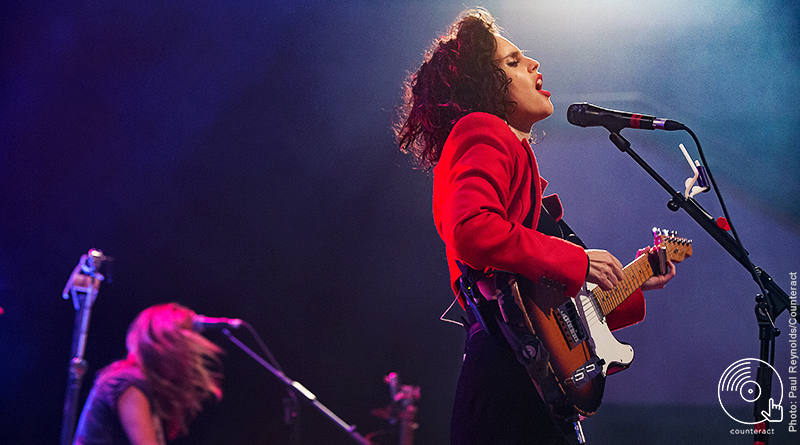 Rather than the de rigueur support band or two, Anna Calvi has instead chosen to have DJs before her set. It certainly makes for a quicker turnover. As audience members file in to the neo-classical hall, A selection of indie electro pop greets them. It’s chosen by Sophie Galpin, multi-instrumentalist and PINS drummer. Her set creates a chilled out, trendy-house-party atmosphere, despite a few technical hitches along the way. 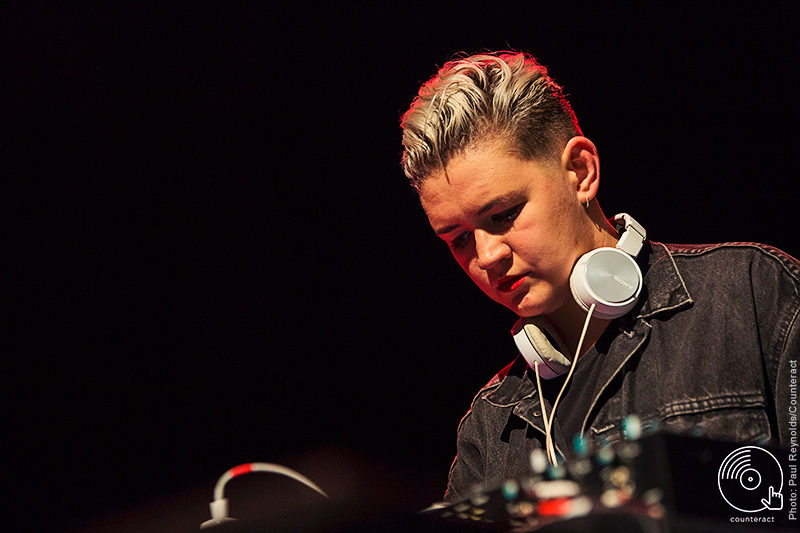 Galpin is followed by Birmingham’s own Kaila Whyte of Youth Man fame. Watching her approach the desk, it’s hard to imagine what this self-described “destructive Brummie sex-punk” could choose to play. However, she spins a selection of post punk and no wave that provides a welcome backdrop as Town Hall fills up. 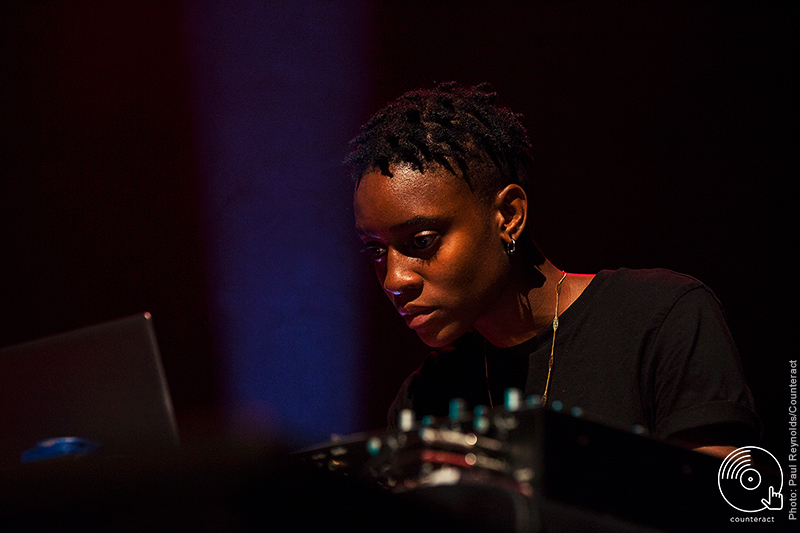 The music playing over the PA cuts out abruptly at around 9pm, leaving the audience bathed in hushed silence and red light. Anna Calvi enters, wordless, wearing a red military jacket. She walks to the front of the stage and unleashes a shameless, reverb drenched guitar solo. Fans might recognise it as ‘Rider to the Sea’, the opener from Calvi’s eponymous debut album. It rings around the room with big, Dire Straits energy. As her guitar rings out, she approaches the mic and leans in. Without introduction, she strums nonchalantly and sings the breathy vocal line of ‘Away’. She has the room in the palm of her hand. 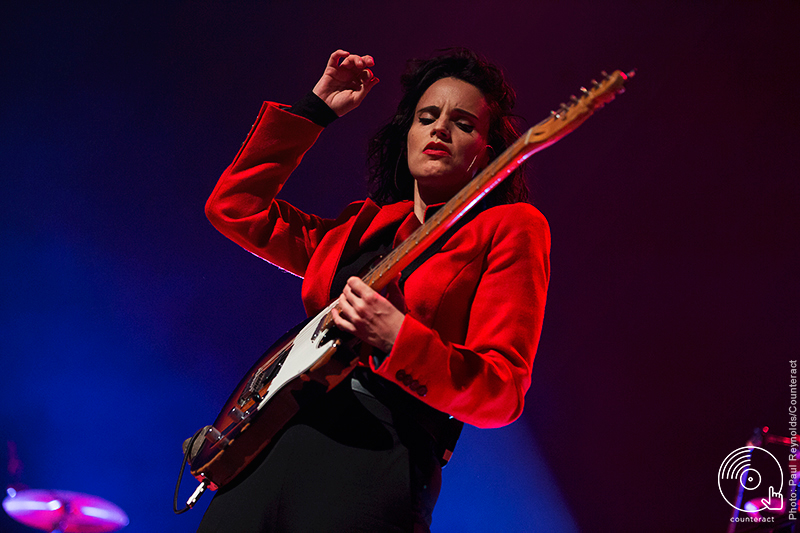 The rolling bassline of ‘Indies or Paradise’ kicks in. It’s provided by Calvi’s imposing multi-instrumentalist Mally Harpaz. She stands to the back of the stage in an arcane circle of keys and percussion. Percussive slide guitar cuts through the room as the band build the song up to echoing stadium rock proportions.

The set is mostly made up of songs from Calvi’s hotly tipped new album, Hunter. As the evening progresses, it becomes clear that the central conceit of her art-rock is in the dynamics. She takes the audience down to the Lynchian depths of ‘Hunter’, then swinging back up to the catchy ‘Don’t Beat The Girl Out Of My Boy’. Punchy toms get the subdued crowd moving to the lascivious ‘Alpha’, a highlight of the set. Calvi sings, “I’m an a-a-alpha, I divide and conquer” with conviction. By the end of the song she is on the floor, a crumpled heap of fuzzy feedback. 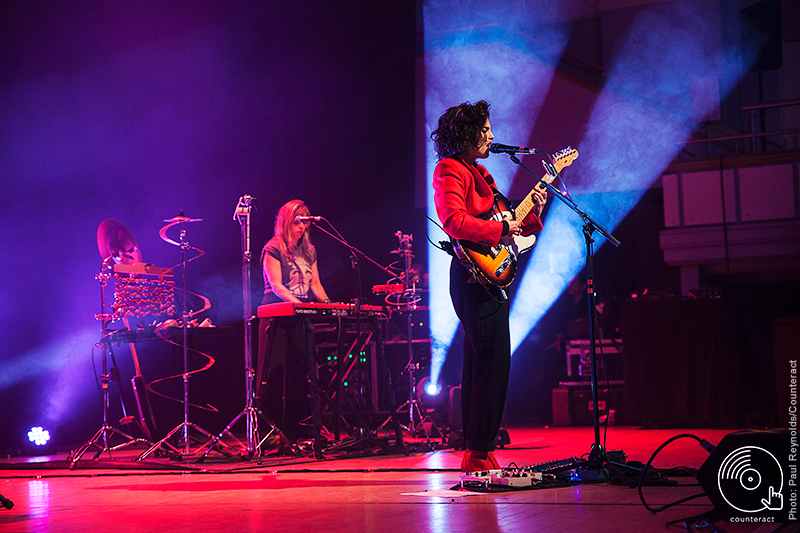 Calvi’s songs blend eighties-levels of guitar wankery with spartan post-punk riffs and operatic vocals to create a gloriously weird sound. Her latest release comes with a statement of intent.

“I want to go beyond gender. I don’t want to have to chose between the male and female in me…I wear my body and my art as an armour, but I also know that to be true to myself is to be open to being hurt. The intent of this record is to be primal and beautiful, vulnerable and strong, to be the hunter and the hunted.” 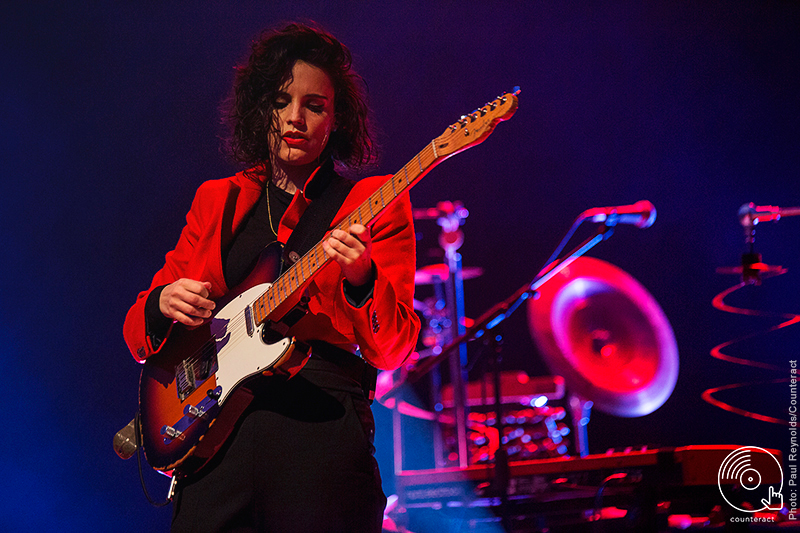 It’s a record of paradoxes, paradoxes which are echoed in her live performance. Strutting to the front of the stage before shrinking back to the fringes. Theatrical vocal delivery, followed by wordless chasms between songs. She lulls the crowd with the forlorn ‘Swimming Pool’, gives a cursory introduction to her bandmates, and draws the set to a close. On the insistence of the Town Hall audience, they return for an encore. The last track of the night is a pulsating, obtuse cover of Suicide’s ‘Ghost Rider’. The bass-line rings around the room and the band departs again, leaving the stage still awash with red light.