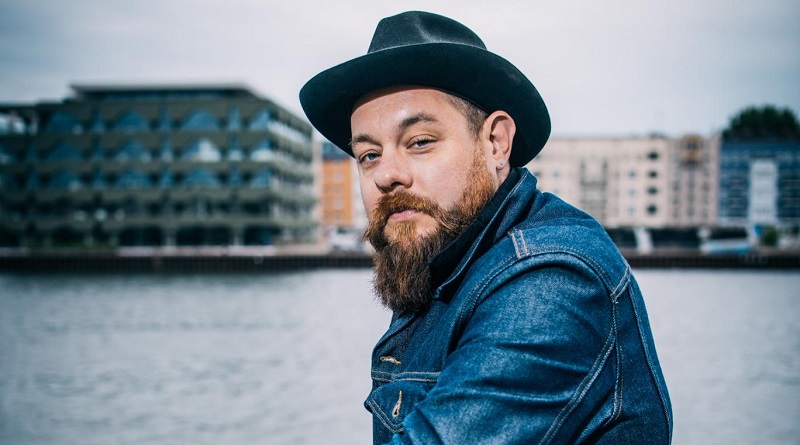 In the film,  Austin To Boston, Gill Landry introduces Nathaniel Rateliff by explaining “Nathaniel is the most seasoned of the lot, he’s toured longer and harder than all of the group put together. He’s one of only a handful of people that I know personally who can translate their pain so clearly through their voice and song.” If you have ever had the pleasure of listening to Nathaniel’s 2010 album In Memory of Loss and his 2013 album, Falling Faster Than You Can Run, then you can uphold Landry’s explanation of the deep resonating pain, torture and bliss that surrounds each chord in Rateliff’s work. Each millisecond of song drips with unfathomable longing, bottomless sorrow and untold beauty and through the storytelling, Rateliff creates songs that mirror the realities of life, the good and the bad, the beautiful and the ugly. His heartbreak mirrors ours and his jaded joy is certainly relate-able. Its one of the many reasons I love his music, it presents reality in a way that is not gold tinted or foiled, it presents an introspective reflection on the tumults of life.

It was this tour worn, slightly sad man that I was expecting to be on stage on the 14th of November. This, however, was not the case and instead of sad and solemn, we received an outlaw cowboy who, through swinging jazz undertones and gritty vocals, created a two-hour party. Nathaniel Rateliff and the Night Sweats, have been on tour for the most part of two years and their self titled 2015 album is a honky-tonk meets rock album that has generated massive success. A little after the opener, Nathaniel and his six-man band graced the stage, kicking off with ‘I’ve Been Falling.’ Immediately the audience started dancing, its impossible not to as the upbeat tempo tied with Nathaniel’s grizzly voice made him seem even more ferocious than his album details. Next up were, ‘I Need Never Get Old’ and ‘Look It Here’ , continuing the swinging honky-tonk. With the infectious beat running through our brains and veins the crowd jumped and hollered like wild animals. There was infectious electricity in the air, a palpable sense of excitement and escape.

With Nathaniel remarking, ‘We’ve come a long way for you so have a good time’, this desire to create a party atmosphere is mirrored by the bands interaction on stage; each member interacts and dances with each other and is pumped by the music tempo to create a totality of festivities. ‘Hollowing at the Moon’ has a slower tempo, a love song of sorts, which works to display the softer side to the act. A cover of Leonard Cohen’s ‘Chelsea Hotel #2’  adds sentiment displaying Nathaniel’s obvious connection to the late Cohen.  A few other acoustic songs mellow out the ravenous crowd, but not for long as Nathaniel picks up the beat once more, playing new songs as well as fan favorites, ‘Boil and Fight’, ‘I’d Be Waiting’,  ‘I’d Need Never Get Old’ and ‘Shake’. Each song builds on the feverish excitement of the previous and ending with ‘Trying So Hard Not to Know’ and ‘S.O.B’,  the first single off the album, the night ends with a cacophony of dancing and singing that is elating and ear splitting.

Nathaniel Rateliff put on an energetic and swinging show and the honky-tonk-meets-rock-singer seems untouchable on stage, almost a demigod that leads his people for a short period of time. While the show was incredible, it wasn’t the show I was expecting. The somber artist reflected in the first two albums, the albums with The Night Sweats, was nowhere to be found and songs such as, ‘Shroud’,  ‘Whimper and Wail’ along with personal favorite, ‘When Do You See,  where noticeably absent. The unfathomable depths of despair and distrust, the things my heart longed for during this show, where replaced by soul swinging and dance vibes.   Although the band put on an incredible show, the Nathaniel Rateliff that is present on this new album and tour is a drastically juxtaposed character from his other albums. It is not a bad thing, all of his music is brilliant, but one must enter into the show knowing that the Nathaniel we are experiencing is one of excitement and emphatic dancing. The gloomy singer songwriter is replaced by swinging outlaw whose music ignites and excites the spectator and whose stage show is one to catch.