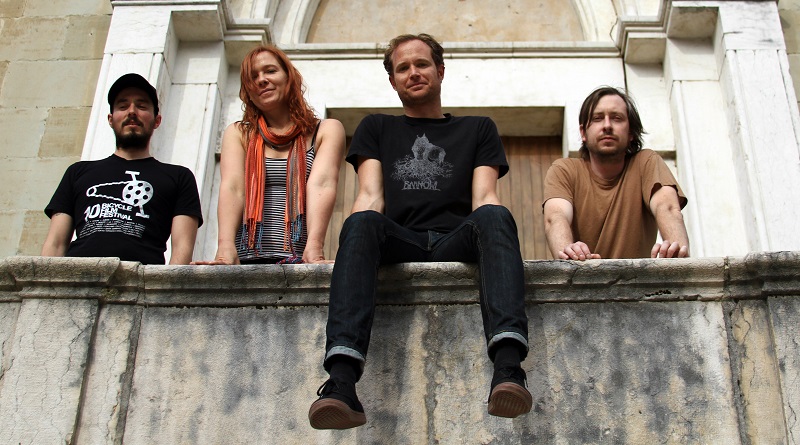 Holy Sons is the musical creation of Portland songwriter, Emil Amos, a multi-instrumentalist known for his involvements with well respected bands such as, Grails and Om. Tonight, along with drummer and bassist, Emil began his set on a sombre note, with a concentrated gravel and emotion within his voice. The personal subjects of his songs was unquestionable; Emil provided us with a vision into his private life that showed a courageous and honest quality. Musically, the tempo was slow paced and the genre twisted and turned from tones similar to early Black Sabbath, to country and folk, and ending on garage rock. Emil’s voice began raspy and dark, which then evolved into a folk influenced vocal style comparable to Neil Young. The set was varied and provided a thoughtful insight into the world of an honest, gifted and prolific songwriter.

Golden Void are a four piece band originating from the San Francisco Bay area. Whilst individually having involvement in other musical projects such as, Earthless and Assemble Head in Sunburst Sound, collectively they create their own style of groove filled psychedelic blues rock.

As the band prepared to begin, it was noticed and appreciated that this performance was not going to be a rehearsed gig as it is conventionally known. There was no set list, no planned order of routine, and with the lack of a customary raised stage in the tiny venue, the gig became reminiscent of a bands jam session being observed by friends whereby any requests were welcomed.

They opened their set with ‘Burbank’s Dream’, the first song from Berkana and the smiles on the band members faces suggested that they were going to enjoy their performance of catchy craftsmanship and instrumental meanderings. By the second and third songs, ‘The Curve’ from the debut album, and the hypnotic melody of ‘Astral Plane’ from Berkana, the fluid structure of the four piece and their comfortableness with their musical communication flowed throughout the venue. The upbeat, blues whirling of ‘Dervish’ was greatly appreciated along with the sonic journey of ‘I’ve Been Down’, showing that Isaiah is not only a great guitarist but also possesses a soulful voice that brings the whole band together to cast a wide birth of groove hooked, spacey sound – without being needlessly grandiose or overblown. Personally, the highlight of the set for myself was the closing song, ‘Atlantis’, their longest and last song on the debut album. The melody, layering and vocals that began gentle and hypnotic, swelled and dropped like waves, eventually building up to a powerful crescendo of contemplative and mesmerizing musical finale.

Given that the band had taken their name from a song on Hawkwind’s 1975 album, Warrior on the Edge of Time, it was completely fitting and appropriate that their choice of encore would show their respect to the recently departed legend that was Lemmy. Following the brief break, the band returned and performed a faultless cover of Motorhead’s, ‘Iron Horse/Born to Lose’, to an audience that loved every second of it.

Golden Void have managed to break through the barrier of musical stereotype by delivering albums that not only, embrace the musical heritage of the west coast, but music that sounds familiar yet refreshingly new at the same time. Their live performance proved to be an impressive experience and the talent, originality and naturalness of Golden Void established that they are one of the best psychedelic rock bands around that we hope to see again.