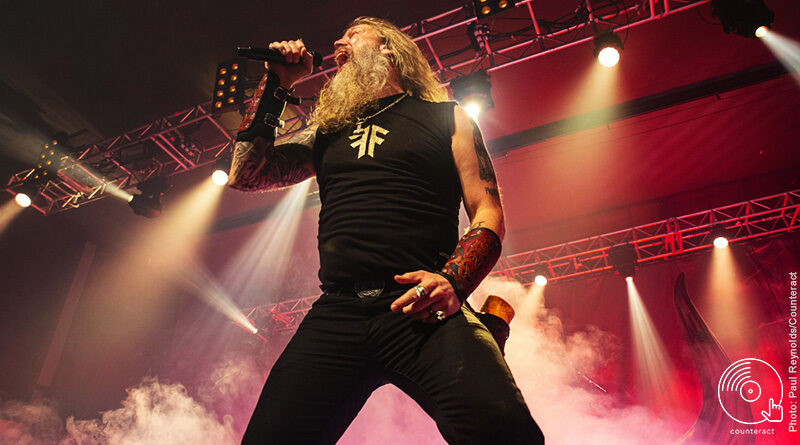 The clouds loomed low and the ground shook on the night of November 28th. The forces of Birmingham tried hard, but they could never be ready for what would await them. Following the release of Berserker in May, melodic death metal giants Amon Amarth would lead a vicious, all-Swedish stampede into the O2 Academy as the first UK date on their Berserker World Tour.

Legendary frontman and producer Peter Tägtgren would open the night with his longest-serving band: Hypocrisy. Beginning with the opener from 1999’s self-titled Hypocrisy, epic synthscapes and a driving, distorted bass riff provide a backdrop for Tägtgren to howl the blood-curdling introductory scream to ‘Fractured Millennium’.

While ticketholders continue to fill the venue over the course of the set, long-time fans clad in Hypocrisy merch are there from the word go. Despite their last studio album being released in 2013, they stick to older material, not venturing beyond 2005’s Virus for tonight’s setlist. From start to finish, Tägtgren proves why he’s been in the Swedish metal scene for so long. An impressive showing from the oldest band on the bill. 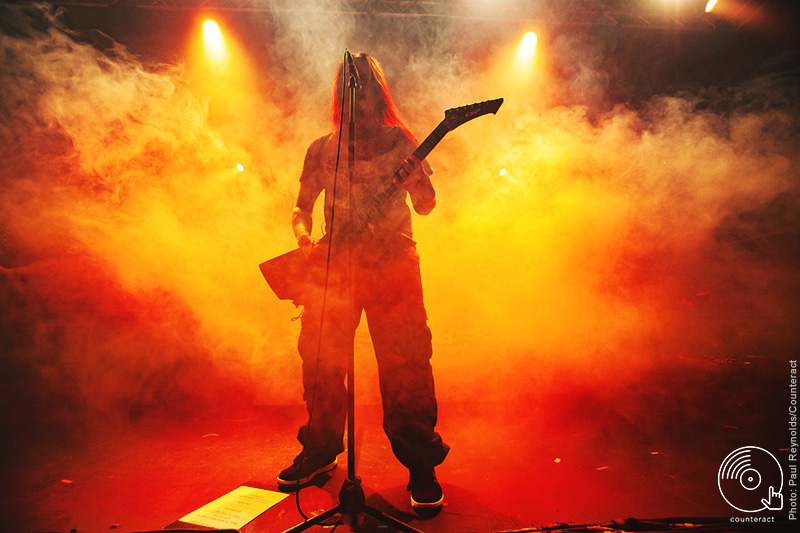 Up next are fellow veterans Arch Enemy, fronted by Alissa White-Gluz of The Agonist fame. At this point the sold-out venue is nearly full to capacity and photographers are scrambling to get into the pit. Opening with a track from 2017’s Will To Power, thundering guitar-work from Michael Abott and Jeff Loomis energises the crowd. Famed for her monstrous vocal performances and huge stage presence, Alissa White-Gluz doesn’t disappoint. When the audience isn’t headbanging, all eyes fix on her as she delivers impressive screams that are actually hard to believe. 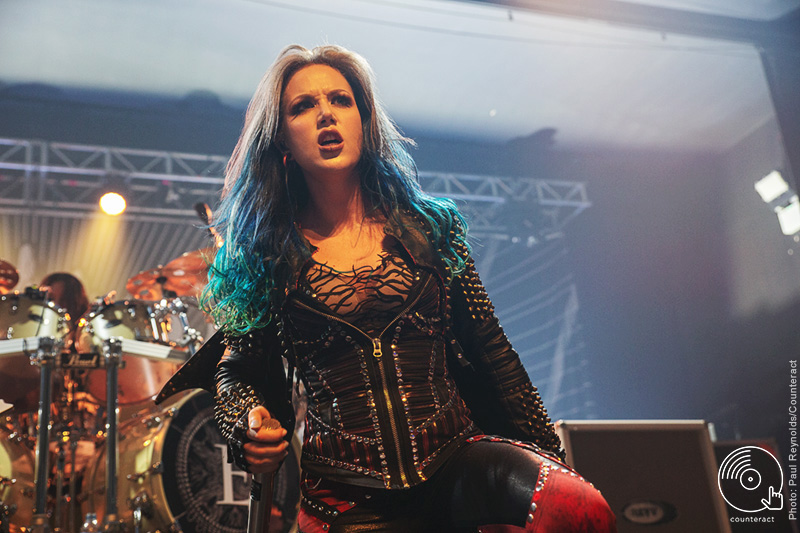 After kicking off with new material, they take a retrospective dive into the Angela Gossow era of Arch Enemy, performing fan favourites such as ‘My Apocalypse’, ‘Ravenous’, and finally ‘Nemesis’. Fans young and old sing along to every word and are left grinning when the set comes to a close.

An excited energy begins to stir within the crowd. People push their way to the front, screaming in anticipation. The lights dim, and Amon Amarth slowly make their way to the stage. The introductory riff to the all-new ‘Raven’s Flight’ pours from lead guitarist Olavi Mikkonen’s strings and the mighty Johan Hegg mans the front of the stage with his signature guttural roar. Revealed behind them is a giant viking helmet set piece, upon which drummer Jocke Wallgren performs with pummelling precision. 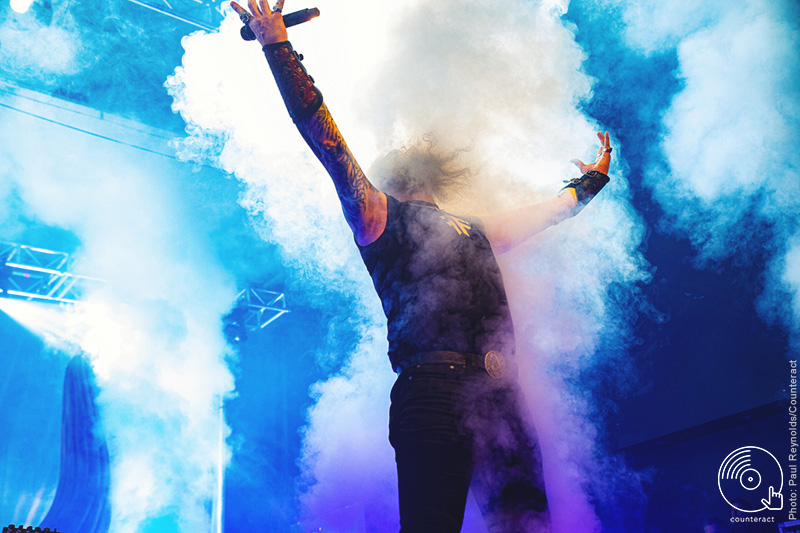 Between songs Johan greets the crowd with a welcoming smile. He mentions how Birmingham is “the most metal town in the UK” and yells “Skål!” before chugging from his viking drinking horn. Fans howl in approval and the set continues. Classics from throughout the 2000s sound as good as ever, ‘Runes to My Memory’ and ‘Death In Fire’ in particular sound razor sharp. 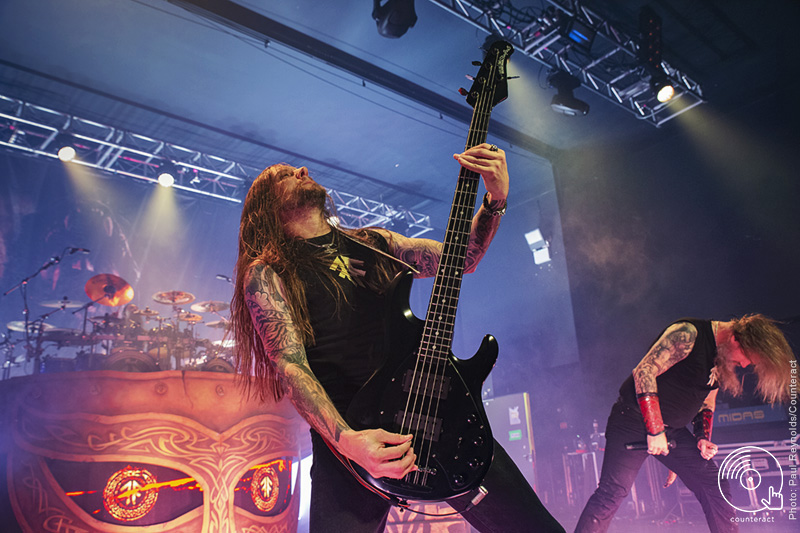 Showing their passion for theatrics and norse mythology, next came ‘Deceiver of the Gods’. The O2 Academy is bathed in green light and a figure wearing a skull mask with giant horns and glowing green eyes emerges from behind the stage. Wielding a sceptre and snarling over the front of the stage, the visual accompaniment of Loki serves as a fun reminder of the stories behind the music. Enactments of viking battles come later, with armour-clad men fighting each other on stage to the sounds of ‘The Way of Vikings’ and new single ‘Shield Wall’. 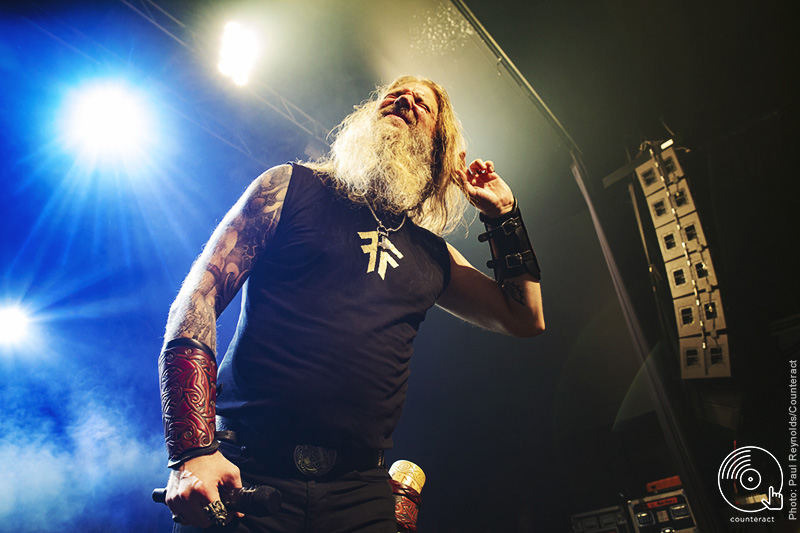 With songs like ‘Guardians of Asgaard’, ‘The Pursuit of Vikings’, and ‘Twilight of the Thunder God’ left to close the night, the crowd musters the last of its energy and battles its way through to the final blow. The perfect way to end tonight’s frenzy of sweat, passion, and metal. Skål! 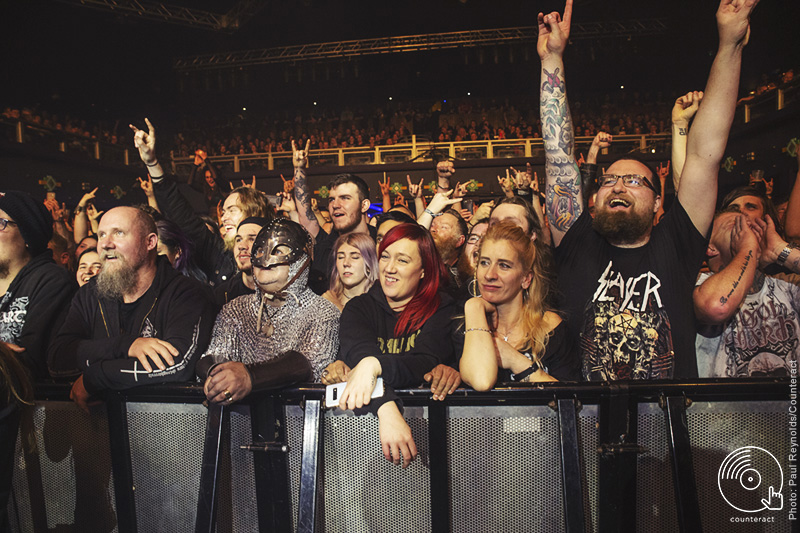