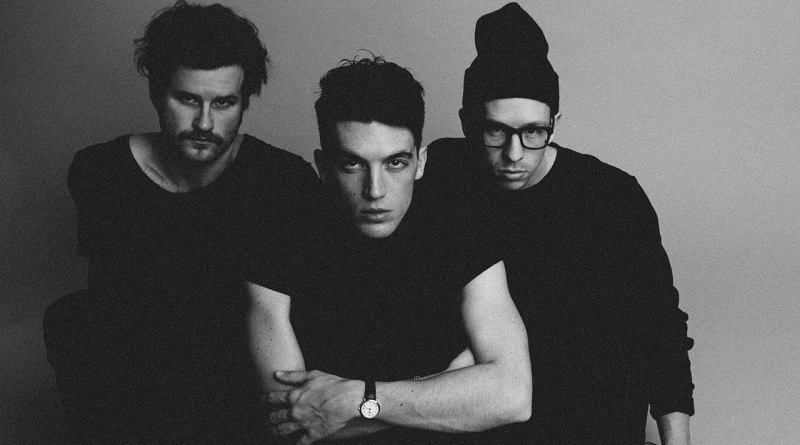 Los Angeles trio LANY are on the brink of becoming massive, with two successful EP releases and an album on the way, they set out supporting pop-queen Ellie Goulding on her humongous UK arena tour. Counteract caught up with Paul, Les and Jake before their support slot at Birmingham’s Barclaycard Arena.

Whilst it may be daunting playing such huge venues, the band feel positively about their performances on this tour.  “It’s been very different, people are a lot further away from the stage than what we’re used to. But our songs sound incredibly massive so that’s inspiring. If there was no one in there we would still have a great time because the sound is so huge,” commented frontman Paul. He’s dressed stylishly with long dark hair like a slick pin-up singer. He isn’t reserved in expressing his ambitions for where he wants the band to go. “We want to play for as many people as possible and we have specific goals in mind. We would love to get a number one debut record, and have as much fun as possible. We aren’t shy about wanting to be one of the biggest bands in the world.”

The band just played their first UK headline show at the Camden Barfly, which was met with a dream reaction. “We played ‘Where The Hell Are My Friends’ which was released four days prior and everyone in the room knew the words to it which is such a rewarding feeling. After a year of playing to rooms of people that don’t know who we were as a support act it felt like things were really coming together” Paul described. Les particularly appreciated the enthusiasm of the fans. “When you see people just so happy smiling so big, it’s so fun that we are able to help bring a special moment to them”.

To go along with the distinctive music, Paul designs the beautiful cover art for all of the bands singles and EPs. “Obviously the music is most important but it’s really powerful to create a visual that elevates the experience. I’m really proud of the work representing total heartbreak with the flowers in the sink” he took a sip of his coke before continuing. “There’s a bunch of little details. With ‘Where The Hell Are My Friends’ there’s a line “Friday Wine and the Internet” and I wanted to use a wine emoji but make it really small and all alone because that’s how you feel in a big city. There’s a lot of symbolism.”

Paul plans to design the future album artwork when the time comes. “We’re very in-house – we don’t like to outsource anything. It’s not that we think we’re better than anyone but it keeps it more personal and intimate. We are extremely connected and involved with our fans and everything feels very hands on. We’ll keep doing that for as long as we can!.”

In terms of their impact on their audience they want to release music that resonates with many. “I want it to be really aspirational, to push people to be better at whatever they’re doing or whoever they are,” proclaimed Paul. “I hope it speaks to their souls and the find peace or hope or excitement whilst listening to us. My favourite music is stuff that makes me feel a lot of things.”

After intensive touring the band are headed home to hopefully finish their album, as paul stated. “It’s been a really hectic 2016 but we have all of April off to hopefully finish it. We also have a music video coming out soon for ‘Where The Hell Are All My Friends?’ Which we shot on the 17th of March, this is a big year for new content and touring and us being a very active alive band. We just got our first play on BBC Radio One which we’re very proud of as well!.”

What elements make up LANY’s best work? “Sonically we’re very minimal which is something we hope we can keep going” Les claimed. Paul continued saying “We’re really known for our really cool synth sounds for whatever reason, Jake’s drums are iconic, I would hope we’re known for our lyrics I care a lot about what I write. I like working in stand alone one liners like ‘I Love You So Bad’ ‘Where The Hell Are My Friends?’” Jake summed up their process in terms of producing their best work concisely claiming “ We talk about how much we love music that makes us feel things and I think we do that well in our work. We’re very intentional about every part of our songs and the space we create with our music, our process is very special”.

LANY’s music has a distinctive cinematic feel that sounds as if it could soundtrack a movie, but what would the film be like and who would star? Paul commented, “It would probably be a coming of age movie. We love Dave Gahan and Alicia Vikander. It would be something really over the top John Hughes esq, and we’d want people leaving the theatre weeping. I went to see The Fault In Our Stars alone and I cried, I had tears in my belly button it was amazing. That’s the kind of stuff we’d want to be all over”

It’s clear that LANY have a massive vision of where their going with their music and they will most likely be everywhere throughout 2016. With intelligently put together tracks and high ambition success is sure to be just around the corner.