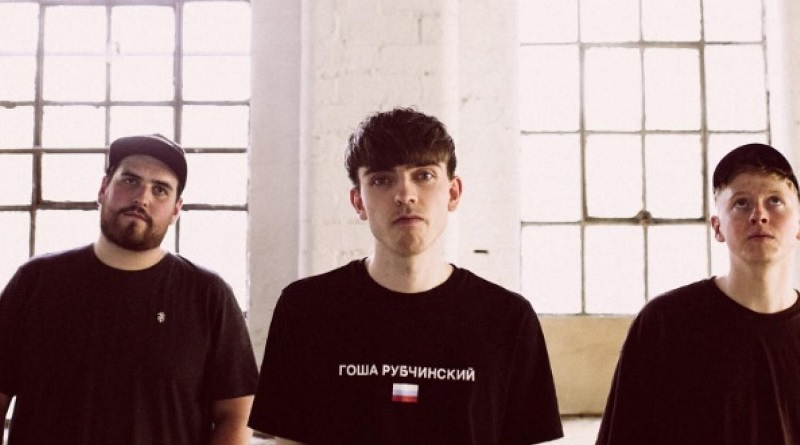 The rise in popularity amongst Birmingham‘s music scene within the past few years has certainly not been overlooked (especially not by us). But currently at the forefront of it all are Birmingham’s proud creation – Jaws, as they’ve emerged back onto the music scene recently with the drop of their highly anticipated second album after disappearing off the radar. However, the trio agree that they’re happy they waited a while and that now definitely feels like the right time for them. Now they’re back sounding stronger and heavier than ever with their second LP, ‘Simplicity’ and a headline tour right around the corner which kicks off this month. In their natural process from blissed out to rocked out, the prominent theme of escapism and inner battles still hits you in the face in the same way that the powerful build-ups and drops do within most of ‘Simplicity’s tracks.

On the afternoon of Saturday November 5th, the band held an album launch at Birmingham’s Sunflower Lounge which made for an intimate acoustic set with more impatient and buzzing fans that the venue could hold, as people were spilling out the door. Connor Schofield, JAWS’ frontman, seemed a little overwhelmed at the turnout and admitted how surreal it felt. A raw and most natural feel to the afternoon became present with Connor’s unique, raspy vocals humbly leading the band as they played newbies ‘What We Haven’t Got Yet’, ‘Work It Out’, ‘Right In Front Of Me’ and ‘Cast’, where the crowd stood and watched admiringly; leaving the crowd in anticipation with a mere teaser of their live performances of them to come on their tour. Whereas when older classics ‘Stay In’ and ‘Be Slowly’ were played, a hearty singalong emerged from everyone in the room, reminding us all why everyone developed a liking and interest to this band from the get-go.

We managed to catch up with Connor and Eddy Geach (drums) amongst the chaos to ask a few questions regarding the excitement of their new album.

So we’re here in your hometown, it’s your album launch at The Sunflower Lounge in Birmingham due to the release of your second album only yesterday. How has the feedback been so far?

Overwhelming. Just ridiculous, but it’s all good. There’s the odd comment where they prefer ‘Be Slowly’ which is fine, but overall it’s great. We can’t keep up with it which is a good thing, our Twitter is going off, that’s how I judge the success of something – if the reaction on Twitter is crazy.

How are you feeling about playing some of these songs live for the first time today?

Yeah for most of these songs we have never played them live before. I mean some of them we’ve tested out over the last 18 months but only once of twice, but it’s exciting. I think there’s 6 or 7 songs off the new album which will be the first time they’ve been played to a live crowd on this tour coming up, but we’re gonna make sure they sound good, obviously. We’re not gonna be like “Oh, this might be shit, don’t listen to this one” but no, I’m sure we’ll be alright.

The album is titled ‘Simplicity’, was there a specific reason for that? Were the songs simple to write or does it refer to a certain style?

We had a song already written called ‘Simplicity’ and that word resonated through the whole process of writing the album anyway and we kind of just kept on coming back to it. I think it also sort of comes from the thought of the fact that in life, to deal with a lot of problems yourself, you do need to take that step back. It’s easier said than done with a lot of people but I find now that in my life I can take a step back and look at things a lot simpler. If you can break it down it becomes easier to deal with rather than being like “Oh for fucks sake I’ve got all of this to do”. So it stems from that I think, in the shortest and easiest answer.

In regards to the album artwork, was there an idea behind that in which was symbolic or representative of the album? Who designed it?

It was so weird how it came about. We know Dan (Whitehouse) from college, and he put a picture on Instagram of a paintings he did and we loved them. We got in touch and asked if he could do the artwork for our record without even sending him any songs or anything. But when he sent all of his work back to us, we felt that they fit with the songs and the mood. We don’t really know what it is ourselves which makes it a good discussion point because you can interpret it in your own way, and it has actually been the main talking point so far.

How was the writing process for this album? Was there more or less pressure knowing that this is album number two?

It was more of a collaborative effort for this one. It was similar in the way that I would bring in a demo for everyone to listen to but then it was a lot more collaborative in the sense that we would then not just play the demo, we’d then work on it live rather than working on it in a structured way by recording bits individually. We would use the equipment we had to lay a skeleton down and build on top of that, whereas before we would be learning full songs from demos. In some cases with our old material, the songs didn’t really work live because we didn’t ‘organically’ make them.

Do you already have a personal favourite off the album so far?

In terms of listening to it, I would say ’17’ is a stand out one for me because it’s deep and it’s different and every time I listen to it I’m excited for certain parts in it that I know are coming. We’ve never played that one live before and it’s definitely one that I really can’t wait for with our tour. But in terms of playing them live, I would say ‘In The Morning’ because I like how that one is sounding in practice anyway just because it’s one of those that just hits you, it’s quite a heavy song. But really I just love every song, I know that’s an easy answer but I just can’t wait to play them all live.

Obviously you guys have been off the radar for a bit too, have you learnt anything since in terms of music or to do with being in a band?

It was just nice to escape this world for a bit because there’s so much falseness, I know that might sound a bit stupid but it was good to step back and not be a part of it for while. There’s this weird overtone of competition that’s really not needed in the industry because it really is not a competition, there’s no ‘winner’. But I think it made us more patient if anything. We were already quite humble about how lucky we are to be able to do this kind of thing and to see that people are still fans and they still care after us being away for that long just makes you even more humble. I felt like it was the right thing to do, we could have done another album straight away as we had the songs to do it but it just wouldn’t have been as good as what we have released. We are happy that we waited it out though, it’s definitely the right time now.

Your sound seems to have evolved into a more rocky vibe, was this intentional as a means to experiment or was it the way that you were naturally heading?

It was definitely natural. Both of us are into heavier music, Connor has liked Blink 182 from the early days for example, and I listen to a lot of heavy metal. It’s always been an influence and we’ve been in that kind of scene too so it’s in there, it’s in our blood so of course naturally, we bought a distortion pedal and a bigger amp. Even when we previously toured with bands such as Nai Harvest and Milk Teeth, we already really liked their sound and music. So with getting to watch them everyday on tour, you sort of take things from that, but overall it was just really natural.

Of course you’ll be heading out on your headline tour later this month, is there anything different your fans can expect? Maybe performance wise?

Apart from us playing totally new songs, I might even put my guitar strap a bit higher because that looks a bit different. I might buy some new t-shirts for a change and put more effort into what we’re wearing on stage but I don’t know about that yet, I’ll see how I feel on the day. I mean we’d like to say we’ve got a brand new spectacular lazer show, but any band knows that money is a thing, and sometimes you don’t have enough of it but we like to put it all into the music. But in terms of developing performance wise, the more you practice the better you get – it’s as simple as that. We’ve been practicing for the past four years, not that I’m saying we’re this really amazing band but you do get better when you practice like that’s just what happens. The most important thing a band can do is practice, still amongst everything, that’s the one thing we’ve never stopped with – even when we couldn’t be arsed, you’ve just gotta do it because you never know.

Simplicity is out now. Jaws head out on a UK tour this month, including a date at the Rainbow on December 2nd. More information can be found here.